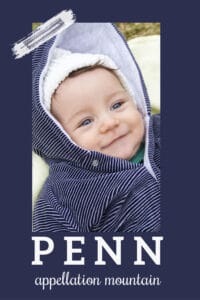 The baby name Penn brings to mind an actor, a comic, and, of course, the Keystone State.

The son of an influential English family, William Penn’s father – also named William – had served as an admiral.

But it’s the son we remember, thanks to the state that bears his name – Pennsylvania.

Established in 1681 as the Province of Pennsylvania, the name means “Penn’s woods.” It’s actually the elder Penn referenced with the name.

The younger Penn’s legacy was greater than just a place name.

Pennsylvania was established with religious tolerance in mind. After all, Penn was a Quaker, and they’d struggled to find a place to practice their faith.

The democratic principles used to structure the colony’s governance would inform the US Constitution.

Penn was also known for treating the Native Americans more fairly than was customary for his day.

And then there’s Philadelphia, city of brotherly love and cheese steaks. His statue tops City Hall and defines the Philly skyline.

MEANING of the NAME PENN

The Penn family flourished in the new world, but the surname itself has fairly humble roots.

It could come from:

Other origins are possible, too.

It doesn’t connect to pen, as in the writing tool. That word comes from the Latin penna – feather, since pens were originally quills, made from feathers. While there’s no etymological connection, it lends the name a serious, scholarly vibe.

Besides the father and son, famous Penns abound.

Actor Kal Penn is another notable figure. He was born Kalpen Modi.

But that’s Penn as a surname.

How did it make the leap to a boy’s name?

Comedian, magician, actor, musician, inventor, and best-selling author Penn Jillette rose to fame as one half of the duo Penn & Teller.

The duo’s career took off during the 1980s, with an Off-Broadway show, lots of late night television appearances, an Emmy-winning PBS magic special, and a guest appearance in a Run DMC video.

He and wife Emily Zolten have also made headlines for their kids’ names: son Zolten and daughter Moxie CrimeFighter.

But no matter how Penn Jillette appears in the spotlight, he’s yet to inspire parents to consider the name.

Actor Penn Badgley, on the other hand, helped put Penn on the list of unique names parents increasingly considered.

He rose to fame as Dan Humphrey on Gossip Girl beginning in 2007 and appeared in a string of rom coms before graduating to the Netflix series You. The thriller is much darker, with Badgley playing a scary serial killer.

Talk show host Jimmy Kimmel asked the actor about the meaning of Penn. Was it a family name?

No, the actor explained. It came from Penn tennis balls.

And the tennis balls? Were originally manufactured in a small Pennsylvania town, which pretty much brings this story back to where it began.

Gossip Girl debuted in 2007. At the time, the baby name Penn was used in small numbers for boys. It had been for years, presumably as a family name.

The name gained in use, peaking at 79 births in 2014, shortly after Gossip Girl left the air.

Since then, it’s remained higher than before. The baby name Penn was given to 63 boys in 2021.

One more famous figure could help boost the name: reporter, news anchor, and actor turned social media star Penn Holderness. The Holderness family rose to fame with their 2013 viral video “Christmas Jammies.” They’ve been busy creating ever since, and in 2022, Penn and wife Kim won season 33 of The Amazing Race.

It’s occasionally heard as a girl’s name, too. In that case it might be short for Top 100 favorite Penelope.

All of this makes the baby name Penn an intriguing possibility. If you love similar sounding names like Quinn, Finn, Flynn, and Ben, then the sound might work. The rich history makes Penn something of a serious charmer. And it’s a name that feels unusual and familiar at the same time – exactly what so many of us are after.

What do you think of the baby name Penn? 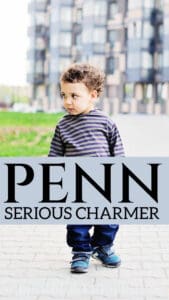 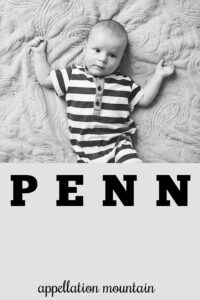