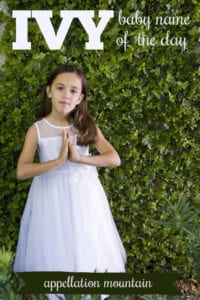 Ivy is a fast-rising vintage name with lots of modern appeal. Add in ties to the winter holidays, and it’s a can’t-miss name for a daughter.

Thanks to Elle for suggesting our Baby Name of the Day.

THE HOLLY AND THE IVY

It’s not “Jingle Bells” or “Silent Night,” but “The Holly and the Ivy” is sung with traditional carols, too.

That’s because the two types of branches have been used to decorate churches at Christmas for centuries. In fact, their association with the season pre-dates Christianity.

Ivy is an evergreen, also known as hedera. It’s found throughout Europe as well as Africa, Asia and Japan. The vines creep and climb, covering the walls of old buildings. That brings us to our second association with the plants.

Some claim the name refers to the vines climbing up the storied academic buildings on campus. Maybe, but the first reference comes from sportswriter Stanley Woodward in the 1930s. Woodward referred to a sports league, and officially, that’s still the case today.

The term implies so much more – academic excellence, yes, which is a good thing; but perhaps also social elitism.

It’s also the name of a famous restaurant in London, and another in Los Angeles, though they’re not connected.

That’s poison ivy. Technically it’s not related to the evergreen. It grows throughout North America, and contact with it can result in an itchy red rash.

The play on words has proven irresistible for writers naming villains.

In the Batman comics, the name belongs to an eco-terrorist. The character debuted in 1966. Uma Thurman played the role in the 1996 movie;  plenty of other versions have appeared over the decades, including on Gotham.

Or maybe you think of Drew Barrymore in 1992’s Poison Ivy, where she destroys the life of her supposed BFF, Sylvie. It remains a cult classic, and inspired a trio of spin-offs, starring equally sinister women named Lily, Violet, and Daisy – but really, none of those work nearly as well as the original.

So what does this mean for the name?

The Victorians embraced many a daring botanical name. Ivy belongs in that category. Even in the late nineteenth century in the US, it remained a Top 300 name. In fact, it’s left the US Top 1000 just a few times over the last century or so.

The more surprising fact? Ivy also appeared in the boys’ Top 1000 for a time.

Perhaps that’s because it’s sometimes a surname, probably derived from a French place name, Ivoy. Or maybe, like many nature names, it does feel unisex. Think of Rowan and River, to name just two.

Today, though, it’s firmly established for girls. It returned to the Top 100 last year, with 3,256 births for girls, compared to just 11 for boys.

Why is it rocketing up the charts?

Some credit goes to Blue Ivy Carter, the eldest daughter of trendsetting parents Beyonce and Jay-Z. It’s speculated that her middle name refers to the number four – via the Roman numerals – IV – which has significance for the couple.

But it’s also easy to imagine parents seeing the name as an alternative to Top Ten favorite Ava. And the letter V is powerfully popular for girl names these days – just ask Evelyn, Olivia, Avery, and Violet. Or, speaking of Violet, maybe it’s just the newest ecovintage girl name ready for revival, a sister for Daisy and Rose.

Whatever the reason, there’s no doubt Ivy makes a great name for a daughter born over the winter holidays – or any time of year. 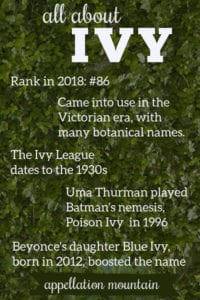