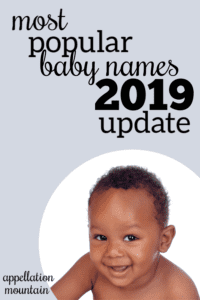 The most popular baby names 2019 update is here!

The US Social Security Administration has released their name data for births between January 1 and December 31, 2018.

As I guessed, Emma and Liam held on to the top spots. Not because they’re still wildly popular – Emma actually fell in terms of total births – but because nothing has come along to replace them. Yet.

On the boys’ side, Lucas entered the Top Ten, just like I predicted.

But the girls’ list was kind of a yawn. Harper returned to the Top Ten, but really it just switched places with Abigail. Most names were pretty much flat.

A number of my favorites entered the US Top 100, including:

Here’s where the real fun begins! I’ll do a fuller Trendwatch report later, but for now:

I’ll have more stories over the next few weeks – and please share your comments about what pops out at you as you look at ALL the new data!