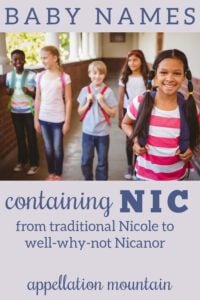 Names containing Nic are a wide and varied bunch.

Nicholas and Nicole qualify as classics. They come from a Greek phrase meaning “victory of the people.” Anyone who has ever worn sneakers probably associates the sound with Nike, the goddess of victory. It’s a traditional and triumphant sound.

We might not even think of Dominic or Veronica as names containing Nic, but the sound is undeniably there – as is the nickname potential.

And then there are the rarities, names like Nicodemus and Nicosia, seldom heard, but made more wearable by the possibility of shortening them to Nic.

If you’re honoring a loved one named Nick, or just a fan of the sound, this list is for you!

The given name of Santa Claus, and a former Top Ten favorite in the US, Nicholas is a classic by every measure.

A slightly streamlined version of Nicholas, preferred in Spanish and French, but also steadily popular in the US.

Usually – but not exclusively – masculine, Nico can be short for nearly any of the names containing Nic. But it stands on its own, too.

An Italian take on Nicholas, Niccolo hasn’t caught on, even as parents have embraced so many boy names ending with O.

Masculine in Italian, but feminine in plenty of other languages, Nicola has never quite caught on in the US. Elsewhere in the English-speaking world and across Europe, it’s a different story. In fact, Nicola ranked in the British Top 100 in the 1990s.

A Slavic spin on Nick, worn by creative forces like composer Rimsy-Korsakov and writer Gogol.

Socialite Nicky Hilton Rothschild was born Nicholai, but she’s one of the very few women with the name.

Not all of the names containing nic are related to Nicholas. Nikhil comes from Sanskrit, and means whole.

You might remember it from 2003 bestselling novel The Namesake, as well as the 2006 movie starring Kal Penn in the title role.

Masculine in Russian, Nikita is another import that leans feminine to American ears. It’s not just the ‘a’ ending. It’s also the 1990 Luc Besson action film La Femme Nikita, followed by a 1997 television series and a 2010 reboot of the same.

It brings to mind legendary actor Jack Nicholson. But it also fits right in with so many favorites for boys right now, from Jameson to Harrison to Jackson.

A surname made famous by Charles Dickens’ character Nicholas Nickleby.

Speaking of Jackson, if Jaxon can catch on, why not Nixon? Before you can say Watergate, remember that it was fifty (gasp!) years ago, meaning a child born in the 2020s probably doesn’t think of Nixon as a presidential surname. I’d argue the same for kids named Carter or even Kennedy and Reagan.

A short form for nearly any Nic name.

A New Testament figure, Nicodemus is a Greek name meaning victory of the people. It’s also famous as the name of the leader of the rat colony in Mrs. Frisby and the Rats of NIMH.

A mathematician, a saint, a Spartan commander, and a string of ancient rulers all answered to Nicomedes.  Today the name is nearly extinct, but could fit right in with Atticus.

Pronounce the capital of Cyprus almost like fricassee: NIK eh SEE eh. There’s also a Sicilian city by the name. It may come from Nicholas. Or maybe they just share a root: the Greek nike, meaning victory.

Rare in English, but heard in other languages, from Dutch to Italian to Bulgarian. (Though in the last, it would be Nikolina with a K.)

Plenty of Ann- elaborations include a nic sound. Besides Annika (and Anika and Anica), there’s also Anneke, Annick and Yannick. Yannick, in particular, is unisex.

A Slavic name meaning morning star, race car driver Danica Patrick introduced it to the English-speaking world. In many Slavic languages, the c would make a ts sound – dah NEETS ah.  But in American English, Danica belongs with the names containing nic.

A handsome choice with an Italian vibe, Dominic has become a Top 100 favorite in the twenty-first century. Feminine forms like Domenica are possible, but rare, as is not-quite-nic name Dominique.

A heroic Hunger Games invention that combines the best of Finn and Nick.

Part-Jennifer, part-Erica, with a nod to Jessica, too, Jenica spiked in the 1980s. While it feels like a mash-up, it coincides with a Romanian name – and definitely brings the nic.

A former Top 100 favorite, Monica brings to mind Friends for many. But the ancient, saintly name has plenty of staying of power – and many a non-90s namesake.

Another name with deep roots, Veronica started out as Pherenike – bringing victory. It became Berenike, Berenice, and then Bernice. But at the same time, we mixed Berenice with the Latin phrase vera icon – true image. Veronica is the delightful, classic-meets-quirky result.

Nicholas spin-offs abound. But sometimes? They drop the nic entirely! While these aren’t names containing nic, they might appeal to families seeking to honor a Nicholas or Nicole.

A modern staple for our sons, Cole brings to mind Old King and Nat King, as well as many more recent bearers of the name.

Another Nicholas/Nicole spin-off, obvious when you consider the elaborated Nicolette.

A Nicholas nickname dating back to the Middle Ages, Colin sounds gentlemanly and polished.

What are your favorite names containing nic? 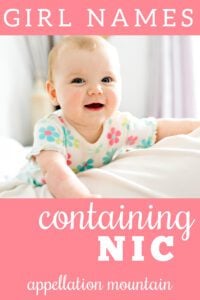 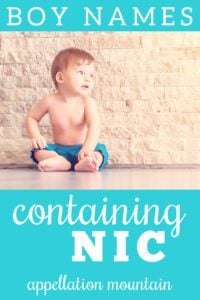