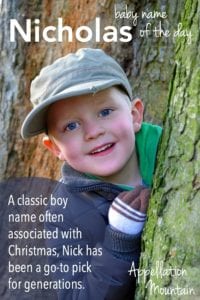 Nicholas reads like a 90s favorite, but it also counts as a classic.

Our Baby Name of the Day comes from this list of traditional names for boys.

Faster than you can say jolly old, this name brings to mind one very specific saint. The Santa Claus legend traces back to a fourth century bishop of Myra, in modern-day Turkey.

Plenty of miracles are attributed to Nikolaos – the Greek spelling – but the one that most influenced our understanding has to do with a poor father to three daughters. Without funds for a dowry, the girls would remain unmarried, and eventually become destitute and desperate. The generous priest tossed bags of gold coins over the fence, one for each daughter. In some tellings, he sent the last bag down the chimney, in an attempt to remain anonymous.

Those weren’t the only gifts he gave, and so, over time, the future Saint Nick became the iconic character we associate with Christmas.

The name means victory of the people – pretty powerful stuff.

Five Popes and two Russian czars have answered to the name. Because of the saint’s fame, it has traveled throughout the world, and enjoyed a long history of use. Authors, scientists, athletes, musicians, politicians, and at least three more saints Nicholas can be found. Chances are you know at least a few.

It is heard as a surname, too, along with Nichols, Nicholson, and the like.

Charles Dickens and F. Scott Fitzgerald both lend the name a literary vibe.

Nicholas Nickleby, Dickens’ third novel, tells of a young man and his family’s trials – and eventual happy ending – after the untimely death of Nickleby Sr.

Fitzgerald used the name for the narrator of The Great Gatsby. Tobey Maguire played the part of Nick Carraway in the 2013 movie, opposite Leonardo DiCaprio as Gatsby. The jazz age novel also ups the name’s cool factor.

So does one more literary tie: Nick Charles, half of Dashiell Hammett’s mystery-solving power couple, Nick & Nora Charles. The couple has appeared in novels, on radio and television, on stage and screen. There’s often talk of yet another movie adaptation in the works.

All of this puts Nicholas among the classic names for boys.

And yet, it recently enjoyed wild popularity. For most years from 1880 onwards, it ranked in the US Top 200. In the mid-1960s, the name started to rise.

I suspect it’s all about Nick. In 1965, The Big Valley introduced us to bad-boy Nick Barkley. The show also gets credit for boosting Jared, and the dates line up.

By the 1970s, actor Nick Nolte added to the name’s appeal. Later in that decade, a young Adam Rich starred on Eight is Enough as everybody’s favorite younger brother, Nicholas Bradford.

In the 1980s, musicians like Nick Cave and Nick Drake would lend the name an indie vibe.

The name just plain felt cool – an edgy choice that hewed close to the traditional, while still feeling fresh and current.

Other Top Ten picks from the 1990s feel dated. Tyler, and maybe even Brandon, are mostly dad names today.

But Nicholas remains evergreen. Currently ranked #63, the name is still in steady use. And yet, it doesn’t stand out as a style star. That’s not a bad thing, though – after all, classic names appeal because they wear well over time.

One way to make it feel more current? Consider nickname Nico instead of Nick. Or even Cole, though that’s often bestowed independently.

If you love classic names with a cool vibe, Nicholas fits.

Do you find Nicholas current and cool? Classic and timeless? Or maybe a little bit  overused?