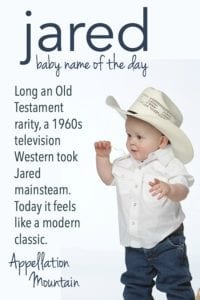 Jared leapt from the Old Testament to the Old West, becoming a go-to choice for boys along the way.

Like so many names, Jared’s roots are traced to the Old Testament.

His name appears in the Book of Genesis, one of many links in the generations between Adam and Noah. It likely comes from the word for descent. In the Book of Jubilees – ancient writings not currently considered part of most Christian Bibles – we learn that this is because angels descended to earth during his long life. We don’t know much more about him.

What we do know is that Protestant parents discovered the name, and started to use it in small numbers.

By eighteenth and nineteenth century America, a handful of figures appear in the historical record.

Politicians from Georgia, New York, New Hampshire, and Minnesota answered to the name during the 1800s.

That falls after the Colonial cool era of Ethan and Aaron, but it shares that vibe – a name that feels modern, even though we’re finding it on the pages of a history book.

Jared: By the Numbers

The name remained rare until the late 1930s, when it started to rise in use.

Finding a reason has proved elusive. The name resembles Gerald, a 1930s favorite. As Gerald slipped, Jared gained. So it’s possible one substituted for the other. Jerry, too, and Gary both rose in the era. Plenty of names appeal because of similar sound.

Several other J names caught on in the same era: Jeffrey, Jason, Justin. Like Jared, they would peak between the 1960s and 80s.

I found a very few possible influences. Artist Jared French created murals for the Works Progress Administration in the 1930s and 40s. Did the artists receive press coverage? Maybe. In Louisiana, a politician by the name tussled with the infamous Huey Long during the 1930s.

Still, neither fully explains that name’s success. And as it happens, it took a television series to really push this name up the charts.

In 1965, ABC gave us The Big Valley. It’s a Western in the key of Bonanza, but by 1960s standards, it has quite an edge. The show starred the talented, Oscar-nominated Barbara Stanwyck as the matriarch of the Barkley family. (She’d win an Emmy for her Big Valley role.)

The Barkleys lived on a prosperous ranch near Stockton, California. Regal, tough-as-nails Victoria Barkley was widowed prior to the show’s start. A young Linda Evans got her start as Barkley daughter, Audra. Lee Majors also started out on the series as Heath, the illegitimate son of the late Mr. Barkley.

The eldest son answered to Jarrod.

Jarrod Barkley earned his law degree, splitting his time between the ranch and his practice. He also used his education to further the family’s business interests. Dashing actor Richard Long played the role.

The different spelling makes it easy to trace the character’s impact on name trends.

Big Valley clearly deserves credit for taking this name mainstream, regardless of spelling.

Long after the popular Western left the air, this name reached the US Top 100. By then, most parents likely forgot the television series.

Instead, Jared became a normal name. As of 2016, it feel to #384, eclipsed by 21st century cowboys like Wyatt and Maverick.

But if you’re after a familiar name with long history that’s much less common than Jackson or Elijah, Jared fits nicely. It’s nickname-proof choice that makes for a modern staple.

What do you think of Jared – classic? Fading 80s name? Or both!?