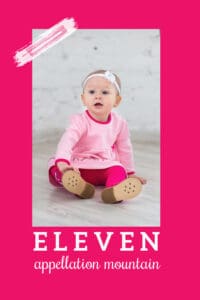 The baby name Eleven feels more like a number, but a popular character could change that.

Believe it or not, the story behind the word eleven is fascinating.

It comes from an Old English phrase meaning “one left” – in other words, one left after counting to ten.

The idea feels off to modern ears, but it was once common. Survivors of a battle were once called “those left by spears.”

And twelve? It means “two left.”

THIS ONE GOES TO …

References to the number occur in all sorts of places, including:

Maybe the most broadly referenced comes from 1984 mockumentary This is Spinal Tap.

During an interview, lead guitarist Nigel Tufnel shows off his equipment. Tufnel explains that his amplifier goes to eleven – way louder than ten. (The interviewer asks the obvious question – why not just make ten louder? A bewildered Tufnel replies, “These go to eleven.”)

That last reference has made eleven a synonym for above and beyond. On a scale of one to ten, it’s even better/louder/higher/more … maybe.

In sleepy 1980s Hawkins, Indiana, a group of boys meet a mysterious girl. They’re all about the same age. But the girl? She’s escaped from a nearby facility. On paper, it’s a US Department of Energy research facility. In reality? It’s a gateway to the Upside Down, an alternate dimension that soon wreaks havoc on the population of Hawkins.

The girl calls herself Eleven. Stranger Things fans know that the boys – Will, Mike, Lucas, and Dustin, quickly shorten it to “Elle,” spelled simply “El.” The adults do the same. They eventually discover her real name – Jane.

Played by Millie Bobby Brown, the character’s story is at the heart of Stranger Things.

And yet, the Stranger Things baby name might be problematic. Being referred to as a number ties in to the horrific origins and tragic backstory, something that’s revealed slowly across the seasons.

But most of the other Stranger Things character names are classic, common, or a little bit dated. Steve, Joyce, Erica – no matter how heroic or appealing their characters, for the most part, 1980s names remain stuck in style limbo.

All of this makes the baby name Eleven – or any number name – feel a little outlandish.

Except they’re found throughout history.

Birth order names, like Octavia, have been used since ancient times.

Children named after their parents and grandparents sometimes take nicknames based on numbers. Firstname Middle Lastname III might answer to Tre or Trey.

Firstname Middle Lastname V might be Finn or even Cinco.

Names like Primo and Segundo – first and second – occur in romance languages, too.

We attach all sorts of symbolism to numbers. A quick search for the meaning of eleven turns up everything from balance to spiritual awakening to new beginnings. But number names can have deeply personal meanings, too – a subtle nod to a loved one’s birthday. In the case of eleven, it might refer to an anniversary or other significant event in the eleventh month of the year, November.

Una and Dex, Quade and Quinn, Dixie and Tripp, Nina and Octavius. Call them rare, and call them bold. But number names are far from unknown.

One of the most popular names for baby girls at the moment is Evelyn. Originally an English surname with Norman French roots, Evelyn has history to spare. It debuted in the US Top Ten in 2017.

Reverse the sounds in Eleven and you’ll arrive at Evelen – Evelyn.

The baby name Eleven brings to mind other tailored, feminine choices, from Addison to Vivian.

Before Stranger Things debuted in 2016, the name had never been given to even five boys or five girls in a single year.

One possibility: they’re typos or misspellings, probably of Evelyn, or another, similar name.

The name was popular for baby girls and baby boys in the era.

Or maybe the Elevens came from bigger families, at a time when that large families were more common, and children named for their birth order less rare.

Another idea: it could be cousin to some long forgotten name that just happened to be the similar. Except men and women named Four and Seven and Five appear in US Census records, too.

With the fourth season of Stranger Things wrapped up in 2022, and a fifth and final season expected in 2023, the baby name Eleven has become a pop culture possibility.

In 2017, a year after the series’ debut, seven baby girls received the name.

It’s not just Eleven, either.

The casts’ names have been at least modestly influential. Australian actor Dacre Montgomery, who plays Billy Hargrove put his unusual name in the US stats for the first time in 2019. As of 2021, eleven boys were named Dacre. A tiny uptick in Gaten, as in Gaten Matarazzo, who plays Dustin, is visible. And Winona, as in Winona Ryder, is climbing in use. Millie was already rising when Stranger Things debuted, but it has doubled in use since 2016.

Other well-established actor names – Charlie and Sadie, Natalia and Noah – might gain in use, but it’s hard to say if it’s from the series.

Of course, the challenge with a name like Eleven is this: it doesn’t take a superfan to connect the name to the show. Like Game of Thrones‘ Khaleesi, or Star Wars’ Anakin, the names offer immediate recognizability. They bring to mind the characters in a way that wouldn’t be true with less distinctive names. Consider Game of Thrones name Arya. It feels mainstream, in a way that Tyrion probably never will.

And yet, the baby name Eleven has slowly transitioned from outlandish choice borrowed from a favorite show to a surprisingly wearable option.

While Eleven remains a stretch, with easy nickname Elle and names like Octavia on the rise, this might be the perfect example of a once-unthinkable word becoming a just-on-the-right-side of wearable chocie.

What do you think of the baby name Eleven? 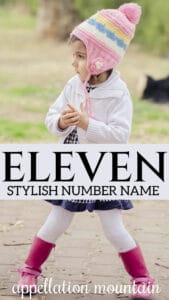 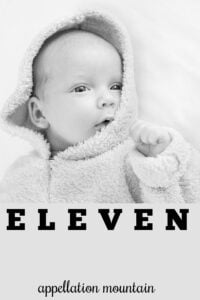