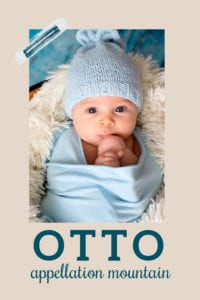 The baby name Otto could follow Leo and Milo straight up the popularity charts.

Thanks to Emma for suggesting our Baby Name of the Day.

The baby name Otto comes from the Germanic aud, meaning fortune – as in wealth. It evolved from Odo, and it used to occur in lots of compound names, like Otfrid.

But we know this name best as Otto.

Fun fact: like Hannah – and taco cat – Otto is a palindrome. It’s spelled and pronounced the same forwards and backwards.

Flip through the history books and you’ll find plenty of rulers who answered to Otto.

It appears in the 600s as the name of a court official. Three Holy Roman Emperors wore the name, along with nineteenth century kings of Greece and Bavaria.

There’s a Saint Otto in the 1100s, known for his efforts as missionary within Pomerania. Others had attempted to forcibly convert the Slavic tribes there; apparently Saint Otto persuaded them instead.

Then there’s Otto von Bismark, in all of his Prussian military regalia. He was appointed by a king, but eventually served an emperor, as his efforts united Germany. A brilliant politician and diplomat, he served as the new nation’s first chancellor from 1871 until 1890, dominating European affairs in the late nineteenth century.

It’s not clear if American parents were influenced by the German statesman, but the name did regularly appear in the US Top 100 in the late nineteenth century. It seems more likely that it was simply a traditional German name imported to the US with immigrant families.

However, all things German fell out of favor during the World Wars.

World War II accelerated the trend, but Otto remained in the Top 1000 through 1974.

The 1970s made Otto a punchline. In smash hit comedy Airplane, the autopilot is an inflatable doll called – what else? – Otto. Former fighter pilot Ted Striker will have to step up to save the day.

We recognized it as a name. But parents didn’t hear the baby name Otto as a serious option for their children. By 1984, just 45 boys were named Otto – an all-time low.

But names go in cycles, and the baby name Otto is no exception.

The letter O has had a good run in recent decades. Just ask Oliver and Oscar, Leo and Arlo.

The baby name Otto fit with offbeat traditional names that parents were ready to rediscover. By 2011, it was back in the Top 1000. It’s climbed steadily, reaching #427 as of 2019.

It’s hard to imagine motorcycle gang members inspiring baby names, but there’s no question the series had an impact: names like Jax, Gemma, and Ezekiel all got a boost from the show.

But the biggest trend that lifted Otto comes down to that o-ending. In 2019, Cairo and Kairo, Tadeo, Niko, Camilo, Leandro, Aldo, Maximo, and Jairo were all fast-risers. The baby name Otto seems downright mainstream in their company.

And yet, it still sits at #427. That makes it a good choice for parents after something with the same traditional vibe as Theo or Max, but looking for a name their son will rarely have to share.

What do you think of the baby name Otto? Can you imagine it catching on?