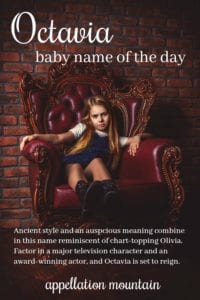 Octavia combines ancient style with an auspicious meaning, and gets a boost from a popular television character, too.

Our Baby Name of the Day is one of the newest girl names to enter the US Top 1000.

Way back in the first century BC, the future Emperor Augustus was born Gaius Octavius Thurinus. His sisters both shared the feminine form of the family name: Octavia Major and Minor. The younger sister married Mark Antony and appears in Shakespeare’s Antony and Cleopatra. History remembers her as widely respected.

Her great-granddaughter also bore the name, and makes it into our history books at the wife of the Emperor Nero. She’s a tragic figure, but Seneca turned her sufferings into a play, one later adapted for opera by Handel, Kaiser, and Monteverdi.

The name simply means eight, from the Latin octavus.

But eight is considered a lucky number in many cultures. Turn it on its side, and 8 resembles the infinity symbol: ∞. In Mandarin, “eight” sounds like the word for “good fortune.”

Maybe it was once reserved for eighth-born children. At least that was true for a few: nineteenth century social reformer Octavia Hill was her father’s eighth child.

Octavia: By the Numbers

During the late nineteenth and early twentieth centuries, this name appeared in the US Top 1000 consistently. The era was good to ancient names: Homer, Virgil, and Cassius also made the rankings; so did Minerva, Claudia, and Valeria. US President Zachary Taylor gave the name to a daughter born in 1816, but she died in childhood.

The name left the Top 1000 in 1938, returned in the 1970s, and departed again after 1999. Pop culture likely deserves credit for the name’s return in the latter part of the twentieth century.

The 70s and 80s were good to Octavia, in a quiet way. Uses include:

In some ways, the name never really went away. It just faded in use enough to leave the Top 1000, and languished slightly outside of the rankings for years. Even between the 1970s and 90s, it only made the Top 500 for one brief year, following the pop singer’s biggest hit.

Name fans have been talking this one up for years, though. That’s because the similar-sounding Olivia debuted in the US Top 100 in 1990, and has been a Top Ten staple since 2001. We’re all looking for potential substitutes for this chart-topping favorite, and Octavia seems like an obvious possibility.

Potential nickname Tavy is every bit as appealing as Livy, and they both share Via as well as O.

The name also fits with musical choices, from Cadence to Harmony to Aria.

The BBC/HBO miniseries Rome failed to spark additional interest in the name, despite featuring a character by the name.

Celebrated, Oscar-winning actor Octavia Spencer gets some credit for the name’s rise. Spencer made her silver screen debut in 1996’s A Time to Kill, won an Oscar for 2011’s The Help, and has gone on to roles in 2016’s Hidden Figures and 2017’s The Shape of Water.

But the factor that put this name over the top? It’s almost certainly The 100, a post-apocalyptic sci-fi series that debuted on The CW in 2014. The series gave us Octavia Blake, younger sister to Bellamy, from the first episode. But she became more of a central character as the series went on, developing into a fierce warrior, and, by the current season, a capable – if ruthless – queen.

Between the fictional ruler and the real-life Hollywood A-lister, no surprise that this Olivia substitute is finding favor once more.

Do you prefer Octavia to Olivia? Do you think this name will continue to rise?