Lulu names range from traditional Louise to obscure Eluned. If you love a playful, sparky nickname, but want something more substantial for your daughter’s birth certificate, this list is for you.

In the 1930s and 40s, the Sunday comics chronicled the adventures of Little Lulu Moppett. Marjorie Henderson Buell created the character. Miss Moppett found her way into scrapes and adventures, but she was generally virtuous and day-saving.

Scottish singer Lulu – born Marie – scored a string of hits in the 1960s. “To Sir With Love,” from the Sidney Poitier movie, was her biggest hit. She also sang the theme song to James Bond movie “The Man With the Golden Gun.”

But none of those famous Lulus suggest formal names for a daughter, so let’s get to the Lulu names!

A pilgrimage site of deep significance to Catholics, Lourdes has sometimes been used as a given name. Madonna chose it for her firstborn back in 1996, with the nickname Lola. But Lulu works every bit as well.

Inspired by the phrase lux casta – pure light – Lucasta was invented by a seventeenth century poet in love with a Lucy.

Romance language Lucia fits right in with Olivia and Sophia. Built-in nicknames like Lucy, Lou, and Lulu are a bonus.

If you love French feminine names like Genevieve, Josephine, and Vivienne, Lucienne might appeal. It’s a sleek, sophisticated member of the Lulu names club.

Most Lucilles shorten to Lucy, but Lulu works nicely, too.

A lovely literary elaboration, Lucinda first appeared in Don Quixote way back in 1605.

Gothic and rare, Lucretia belongs to a Borgia. Nineteenth century US First Lady Lucretia Garfield shortened her name to Crete. But Lulu takes the name in a different direction.

The Germanic Chlodovech became Clovis, then Louis … but with a pit stop to become Ludovicus. That makes Ludovica one of the rarest feminine forms of the classic name. It sounds aristocratic, dramatic, and just a little bit intimidating. But if we can call our girls Isabella “Izzy” and Francesca “Frankie,” then Ludovica “Lulu” fits right in.

An avian name, Luscinia refers to the family of birds including the nightingale. It’s the Latin name, in use since at least 70 AD, and translates roughly into “famous songster.” The name is associated with the Roman goddess Minerva, goddess of wisdom, too.

Invented in the late nineteenth century, Luvenia and Louvenia ranked in the US Top 1000 into the 1930s and 40s. If you’re seeking an undiscovered vintage pick, these might work.

A mix of Lulu names, and that -ella ending we all love, Luella sounds rich with potential. The extra Ls make Lulu an even more intuitive nickname.

If Louise shortens to Louise, then the similar-sounding Eloise seems like a possible formal name for Lulu, too.

An obscure Welsh saint’s name, Eluned looks like it has the “lou” sound right there. Except the correct pronunciation is closer to el EH ned or el EE ned in Welsh. Still, it’s so very obscure that American parents might get away with the unconventional pronunciation that leads to Lulu.

Lourdes made the list above, so why not another Marian name? Often given in combination with Maria, it honors a Marian apparition in Guadalupe, Mexico. Despite the sacred nature of the name, it has a certain rhythm that makes bouncing, upbeat Lulu feel like a natural fit.

Laura belongs with the classic girl names, a timeless choice well-used across the centuries. Laurel makes it a straight-up nature name. Lauren feels a little different, more tied to the 80s, but tailored and just right for the age of Harper and Maren, too.

Are there other possibilities for Lulu names you’d add to this list? 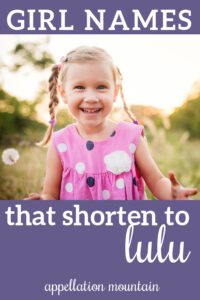 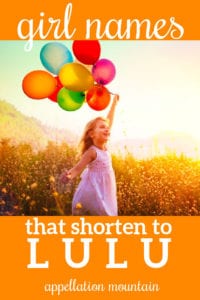