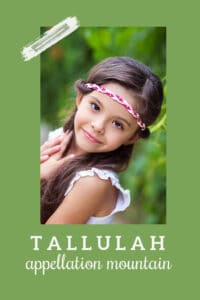 The baby name Tallulah marries Native American history to Irish legend and a Hollywood icon, too.

Thanks to Lise for suggesting our Baby Name of the Day.

There’s more than one spelling for the baby name Tallulah, and two completely separate origins.

Spelled Talulla, it’s the name of Celtic saint. The original was closer to Tuilelaith, from the elements tuile – abundance – and flaith – princess or lady. Put it together, and Talulla is the princess or lady of abundance.

That sounds an auspicious meaning.

The historical figure, however, is all but lost to time. St. Tallula doesn’t make most official saints’ lists, though she’s recorded among the abbesses of Kildare, serving until her death in 885.

At least some of the use of the girl’s name seems to trace to the Irish saint.

Visit Georgia, and you can still see Tallulah Falls.

The waterfalls are said to get their name from a Native American source, either Choctaw or Creek. The first possible meaning is usually given as leaping water, which makes sense. It might also come from the Creek word for town.

While they’re oft-repeated origins, both are hard to confirm. The Choctaw word for water is oka. It doesn’t lead naturally to Tallulah. The Creek word for town – italwa – is slightly closer, but only slightly. (And while italwa is oft-cited, it’s not listed in any online dictionary available as of this update.)

From the 1850s through the 1950s, the Tallulah Falls Railway brought visitors from across the state, as well as North Carolina, to visit the park.

There’s a state park there today; chances are you’ve seen it without even knowing it. It stood in for Wakanda in Avengers: Infinity War. The park is thanked in the film’s closing credits.

So it’s possible that someone from Georgia, or visiting Georgia, might be persuaded to choose the name for a daughter – whether they knew about the Irish saint or the Native American origins or not.

In fact, that’s exactly what happened.

American actress Tallulah Bankhead was born in Alabama in 1902.

Bankhead’s family was politically prominent. Her grandfather was a US Senator; her dad served as Speaker of the US House of Representatives. Flamboyant and acid-tongued, her outspoken support of the civil right movement put her at odds with her family.

The actress lit up the silver screen and the London stage in the 1930s and 40s. She was a scandalous figure, with constant talk of her romantic attachments, politics leanings and exploits at parties.

Speculation about the meaning and origin of the name Tallulah was rife during her heyday. (Check out this 1941 article from the Pittsburgh Post-Gazette.)

The actress often explained that she was named after her paternal grandmother, Tallulah James Brockman. Her grandmother, in turn, was named for the waterfall, because her parents had honeymooned there.

Bankhead remained in the public eye for many decades thanks to television appearances, until her death in 1968.

All these years later, she remains a familiar figure. Most recently, Natsha Lyonne played her in a 2021 film on Hulu.

It would be expected that Ms. Bankhead – and the movie character – might be just enough to push the baby name Tallulah into occasional use.

But US Census records give us a handful of women named Tallulah before the actress rose to fame. Like her grandmother, they may have been inspired by the popular Georgia destination. (A town in Louisiana bears the name, too.)

It rose in use modestly during the 1980s and 90s. But the name’s real surge has been in the twenty-first century, though the baby name Tallulah has not yet ranked in the US Top 1000.

What explains the name’s recent rise?

TALULA DOES THE HULA FROM HAWAII

But a bigger leap came a few years later.

The name dominated headlines when a New Zealand couple found themselves in court. They’d named their daughter “Talula Does the Hula from Hawaii.” In 2008, a judge ordered them to allow the girl to change it.

It’s hard to say how parents in New Zealand and neighboring Australia reacted to the story, but in the US? The name continued to rise.

With multiple spellings, deciphering the popularity of the baby name Tallulah requires some addition.

That means that the baby name Tallulah could easily tip over into the rankings … and, if spellings were combined, could already be on the list.

The numbers alone make the baby name Tallulah one to watch.

But it also stands out for a few other reasons.

Speaking of the UK, Tallulah is rising in use in England. And while not every name crosses the pond, that’s sometimes an indicator that American parents will take notice.

Sound-wise, it’s easy to imagine Tallulah as a mix of shorter favorites like Lucy and Luna, wrapped up with longer names like Olivia. In some ways, it’s a successor to Penelope – a name with long history that’s just the tiniest bit offbeat.

Overall, it makes for a different name – the kind that stands out in a good way. If you’re after something that feels surprising and fresh, but isn’t invented or modern, Tallulah belongs on your list.

What do you think of the baby name Tallulah? 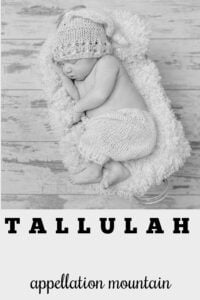 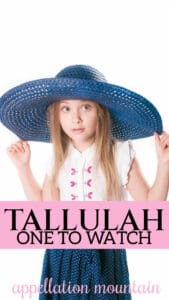