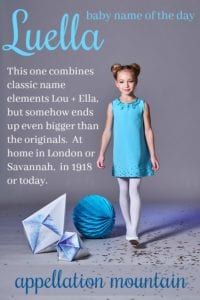 Luella smooshes together that oh-so-stylish Lou sound with the ever-popular -ella ending for a sassy, retro name that’s right at home in the twenty-first century.

Way back in the late 1800s, this name ranked in the US Top 200, with alternate spelling Louella not far behind.

It was a good age for names with the Lou sound. Lucy and Louise ranked in the Top 50; Lulu made the Top 100. Lucinda and Lucille were popular. Forgotten picks like Lula and Ludie fared well, too.

Names like Ella and Della also ranked high back in the day.

The sounds have come full cycle, falling out of favor only to rise once more. In recent years, Louisa and Louise have returned to the Top 1000. And just recently, Luella has joined them.

It’s a dramatic rise. The name has doubled in use since just 2014. Go all the way back to 2001, and just nine girls received the name.

There’s something about this name that feels big. While there’s no single figure that immediately comes to mind, a few notables can be found.

My first thought: fashionista Luella Bartley. The English designer has served as a British Vogue editor, designed edgy collections and collaborations with everyone from Target to Mulberry, and penned a guide to English style. She uses her first name as the label for her fashion house. Bartley makes Luella feel English, quirky, and cool.

Back when trucks were a novelty, Luella Bates – born in 1897 – became a professional truck driver, serving as a test driver during the first World War. She became the first woman to earn a driver’s license in New York, and later toured the country for the Four Wheel Drive company, advertising their trucks.

Born in 1852, Luella Agnes Owen became a noted geologist and researcher of Missouri’s caves. She presented her findings internationally.

In the same era, there’s another scientist as well as a poet. A handful of places bear the name. In the case of one Texas town, it’s because the city’s founder had a daughter by the name.

In 1903, Mary Eleanor Wilkins penned a short story about a vampire-like woman by the name. By the 1920s, Luella Gear had become a well-established comic actor, appearing in movies with stars like Fred Astaire.

Speaking of Hollywood, Louella Parsons became one of the leading celebrity journalists of the 1920s and 30s.

One more possible origin for the name: Llewellyn. It’s a storied old Welsh masculine name, worn by warriors and kings. We tend to associate it the Welsh word llew – lion, but it almost certainly claims much older roots.

You won’t find the feminine form in use in the US, though I’ve found a few in the UK. The spelling might work just fine in Cardiff or Swansea, but I think it’s a stretch elsewhere.

Luella: Tucked in the Middle

Blink-182 frontman Travis Barker and Shanna Moakler chose this as the middle name for daughter Alabama back in 2005.

In 2008, blogger and baby namer extraordinaire Rebecca Woolf welcomed a daughter called Fable with this middle name, too. Woolf noted that it was inspired by her grandfather, Lou.

Luella: Back in the Spotlight

That’s still quite rare, well behind Lucy and Eloise, Arabella and Louisa.

But there’s something irresistible about this name. It’s part London it-girl, part-Southern belle. Feminine but fierce, retro but thoroughly modern, Luella makes for a distinctive name that still feels exactly like the favorites of the moment.

Would you consider Luella for a daughter?