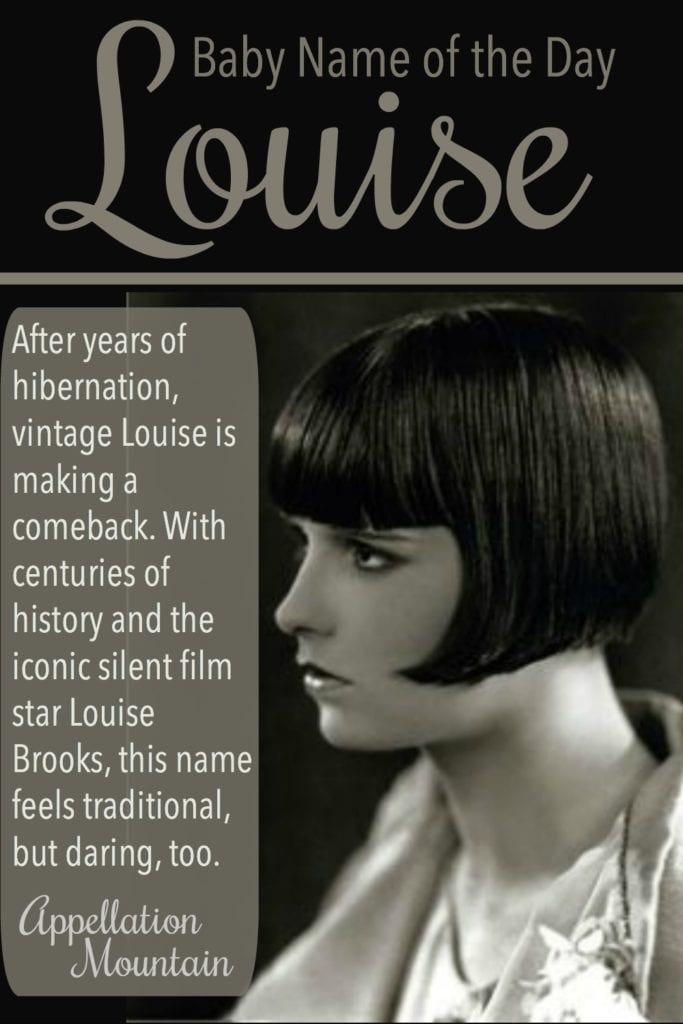 Our New to the Top 1000 series continues with this vintage gem as our Baby Name of the Day.

Eighteen kings of France answered to Louis, from Charlemagne’s son onwards. The fourteenth ruler was known as the Sun King, builder of Versailles. King Louis XVI lost his life during the French Revolution.

The name started out as Ludwig, from Germanic elements meaning famous and battle. Early form Chlodovech inspired Clovis. Later German form Ludwig became Ludovicus in Latin, which eventually smoothed out to Louis in French. Add an ‘e’ to arrive at the feminine form.

The family includes dozens of variants, some well-known and widely-used. Others, not so much. Factor in a few saints, and it’s no surprise that this name endured over the centuries and continued to evolve.

By the turn of the century in America, Louise ranked solidly in the US Top 50, even reaching the Top 20 briefly around 1910.

Relatively few popular girls’ names ended with -a in the era. Alice, Ruth, Helen, and Mildred all ranked in the Top Ten. Frances, Florence, Lillian, Evelyn, and Gladys fared well, too.

And so did girls’ names with French flair. Of course, that’s not exactly new. But Josephine, Lucille, Pauline, and Blanche all appeared in the US Top 100.

Gustave Charpentier’s opera by the name debuted in Paris in February 1900. The successful production first arrived in New York City in 1908, and was still going strong when the Metropolitan Opera first performed it in 1921.

Born in 1906, Kansas-born Mary Louise Brooks became a star just as her name reached its peak. The chorus girl turned silent film star now often comes to mind when we think of 1920s flappers. Her distinctive bobbed haircut sparked a trend then, and is still identified with the actress.

Her career faded when she refused to make the leap to talking pictures. It wasn’t until the 1950s that her rediscovery – and transformation into a legend – began.

During the nineteenth century and into the 1930s, Miss Brooks’ nickname – Lulu – charted in the US Top 1000 as an independent given name. It reached the Top 100 in the 1880s, those numbers from those years are less reliable. (They were first gathered after the Social Security Act passed in 1935.)

Still, we can safely assume that the name remained steadily familiar, and probably quite stylish, into the 1930s. Plenty of other Lou/Lu names ranked well during the same era, too.

We still recognized it, of course. But it belonged to Weezie, George Jefferson’s kind-hearted television wife, in the 1970s and 80s. Or it was Susan Sarandon’s strong-willed character in 1991 blockbuster Thelma & Louise. While both possessed admirable qualities, neither made the name feel approachable for a child.

Instead, Louise remained overlooked until recent years. Our love for Top 100 names like Lucy and Luna warmed up parents to other Lou- names. Louisa returned to the US Top 1000 in 2014. Romance language Lucia continues to climb.

No surprise, then, that Louise shows signs of revival in the US. The British revived this name back in the 1990s, and one of Queen Elizabeth II’s grandchildren is Lady Louise Alice Elizabeth Mary Mountbatten-Windsor, daughter of Prince Edward.

Today, Louise makes a solid choice for parents who love classics like Elizabeth and Katherine, but prefer their names slightly less common. Nickname-rich, but still simple and straightforward, it also substitutes for more popular vintage names like Frances and Alice.

Call this one charming and stylish, but still rich with history and meaning.

What do you think of Louise? Do you have a favorite Lou-/Lu- name?