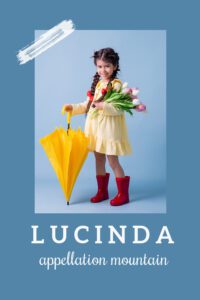 Thanks to Jennie for suggesting our Baby Name of the Day.

LUCIA, BUT MAKE IT LONGER

Martyred back in the 300s after refusing to marry a pagan, Saint Lucia comes with a gory story. It’s said her eyes were gouged out. Artists sometimes depict her carrying her eyes on a platter. She’s the patron saint of the blind, and among the more famous of saints from the ancient world through Middle Ages to today.

Saint Lucia’s Day remains widely celebrated in Europe, particularly in Sweden – even though the country hasn’t been predominantly Catholic for centuries.

No surprise, then, that the baby name Lucia persists across Europe and throughout the English-speaking world in many forms. In English, we shorten it to Lucy.

But elaborated forms dot the historical record, including:

The names all come from the Latin word for light, an incredibly appealing image for a child’s name.

It’s worth noting that Lucina was a name associated with the goddess of childbirth in Roman mythology, predating the martyr. But Lucina, too, comes from the same root word.

Most sources agree that the baby name Lucinda was probably coined by Miguel de Cervantes for Don Quixote.

Written in the early 1600s, the story tells of an ambitious, idealistic, and delusional minor noble who, inspired by the great tales in his library, sets out for adventure.

Even if you’ve never read the book, you know the broad outlines of the story. He jousts at windmills.

Adapted for stage as the musical The Man of La Mancha, most of us can hum “The Impossible Dream.”

And yet, Lucinda is a relatively minor character. She appears in the later chapters, a young woman embroiled in a love triangle. The character doesn’t appear in the musical, or many adaptations.

The French playwright Molière penned Le Médecin malgré lui a few years later. It’s a story of a man pretending to be a doctor. The patient he (really, albeit accidentally) cures is named Lucinde.

Henry Fielding adapted the play in 1732 as The Mock Doctor, but renamed the patient Charlotte.

Still, the enduring popularity – particularly of Cervantes’ novel – made the name familiar to countless readers.

By the late 1800s, when US popularity data is first reported, the baby name Lucinda ranked in the Top 200. Of course, that was peak Lucy, too.

The baby name Lucinda – and Lucy – fell steadily for many years.

It recovered in the 1950s, likely thanks to the rise of the name Cynthia.

But the baby name Lucinda never really caught on, and after 1987, it left the US Top 1000 entirely.

Even as Lucy has returned to the US Top 100, and elaborate names like Isabella and Olivia have become Top Ten staples, the baby name Lucinda remains relatively rare.

Singer-songwriter Lucinda Williams has been recording since the late 1970s, bridging folk, country, and indie rock.

As The World Turns featured the machinations of the ambitious Lucinda Walsh across three decades, beginning in 1984.

Peter Carey’s 1988 novel Oscar and Lucinda was adapted into a 1997 film starring Ralph Fiennes and Cate Blanchett. Blanchett’s turn as the rebellious Australian heiress-turned-glass-entrepreneur launched her career. While it’s partially based on a true story, Lucinda is original.

Actors, athletes, politicians and other notable women have answered to Lucinda.

Elaborate and feminine, the baby name Lucinda is made more versatile thanks to easy nicknames – Lucy, of course, and Lulu, too!

It fits right in with Isabella and Olivia, Amelia and Eliza, a vintage name with plenty of syllables.

And while we all recognize it, it’s surprisingly rare.

It makes for the best of both worlds – a literary, vintage name that’s perfectly on-trend and yet nicely rare, too.

What do you think of the baby name Lucinda? 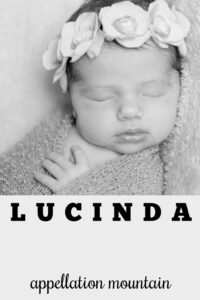