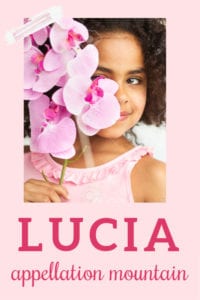 The baby name Lucia shares much in common with Sophia and Amelia, but remains just slightly under-the-radar.

Before we dive into the history of the baby name Lucia, let’s talk pronunciation.

Italians likely say loo CHEE uh. But loo SEE uh works, and is preferred in Spanish. And lots of people, especially in English, opt for loo SHAH. The emphasis shifts from language to language, too. Sometimes it’s LOO see uh or loo shuh.

There’s no wrong way to say the name.

That challenge highlights one of Lucia’s strengths: it’s an international name, the kind recognized everywhere in the western world, and beyond.

Saint Lucia was a fourth-century martyr in ancient Syracuse. Her story is familiar. She rejected a suitor in order to pursue her faith. In retaliation, he turned her into the authorities. Along with many other Christians, Lucia was executed in the early 300s.

Medieval artists fixated on a grisly detail: because her eyes were gouged out prior to her execution, she’s sometimes depicted holding her them on a platter.

The saint’s feast day is December 13th. And in Sweden, for reasons that aren’t entirely clear, it’s become a big deal, a fixture of the Swedish holiday calendar.

A girl wearing a wreath of candles plays the part of Saint Lucia, and leads a procession of singers. Traditional sweets and drinks are associated with the day.

If you’re not religious, you might still find the story appealing. That’s because Lucia is often associated with the Latin lux – light.

In Sweden, and much of the Northern hemisphere, it’s cold and dark on December 13th. That’s about a week before the winter solstice, the shortest day of the year. The symbolism of candles and light feels especially significant.

From Sweden to the Caribbean, you might also associate the baby name Lucia with an island.

Located in the Lesser Antilles, legend tells that a group of shipwrecked sailors washed ashore on – you guessed it – December 13th. They called the island Sainte Lucie, in honor of her feast day.

If you’re keeping track, Saint Lucia is the only country in the world named after a historical woman.

So we’ve covered Italy and Sweden and the Caribbean.

Next, let’s go to Scotland.

Donizetti’s 1835 opera Lucia di Lammermoor takes place in a fictional version of Scotland. (All things Scottish were quite stylish at the time.) It’s a romance gone wrong, a Romeo-and-Juliet story of sorts, with tragedy to spare. Donizetti based his story on an earlier work by Sir Walter Scott, which had roots in real-life events.

There’s also the sophisticated, competitive character involved in endless small-town social machinations in EF Benson’s Mapp and Lucia novels, a handful of video game characters, and celebrity babies galore. In fact, Irish novelist James Joyce named his daughter Lucia way back in 1907. Lucia was born while her parents were living in Trieste, Italy. And then there’s ballerina Lucia Chase, who went on to co-found the American Ballet Theater in 1939.

The baby name Lucia appears in the US Top 1000 every year from 1880 onward. But most years, it hovers around the 500 mark. It was a little more popular in the late nineteenth century, and somewhat less in the 1970s.

But that started to change in the early twenty-first century. Credit three factors:

The baby name Lucia offers a great meaning, a fascinating set of cultural references and stories, and a gorgeous, on-trend sound … all in a familiar, not too-common package.

Would you consider the baby name Lucia? Which pronunciation do you like best?