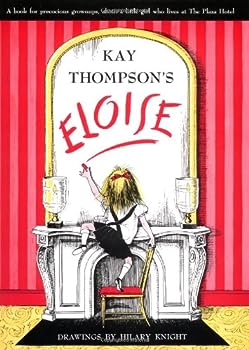 This post was originally published on November 21, 2008.  It was substantially revised and re-posted on August 18, 2014.

One of the most memorable children’s books begins with the heroine introducing herself: I am Eloise. I am six. I am a city child. I live at the Plaza.

Kay Thompson’s pint-sized, über-privileged whirlwind of a girl goes on to get into all sorts of mischief as her nanny gives chase.

Thanks to Kim for suggesting Eloise as our Baby Name of the Day.

Add an H to Eloise, and we come closer to her roots – one of those clunky Germanic combo names, the imposing Heilwidis. The element widis most likely means wide, while the first half – heill – means healthy. In French, Heilwidis became Héloïse, and so some link it to the Greek helios – sun. But that’s almost certainly folk etymology.

Others cluster Eloise and Louise, and tell us that they both mean “famous in battle,” but again, it’s more of a happy coincidence that they share sounds.

We can thank the Normans for bringing the name to England, most often as Helewise and sometimes as Helewis, Helewisa, Elewisa, or Elewys. Like many a medieval moniker, she faded from use, only to be revived by the Victorians.

Parents may have been inspired by Heloise and Abelard. The letters from their illicit affair remain required reading for romantics even today. (And talk about crazy baby names – they called their son Astrolabe!) By all accounts, Heloise was not only passionate, but also brilliant and accomplished in an era when few women were able to excel at scholarly pursuits. After the brouhaha over their affair, Heloise took herself off to a convent and eventually became abbess.

Eloise had a good run. She ranked in the US Top 1000 from 1880 through 1965, peaking at #164 in 1921. Besides the girl at the Plaza, there’s a capable Aunt Eloise in the Nancy Drew series and an oft-quoted Titanic survivor named Eloise Smith.

Until recently, she was heard in Europe, but remained a rarity in the US.

Denise Richards gave the name to a daughter in 2011, a sharp departure from her earlier picks for daughters Lola and Sam.

If you’re looking for a stylish on-trend choice for a daughter in 2014, Eloise is a great choice – as long as you don’t mind the possibility that she’ll continue to climb!

How high do you think Eloise will climb?  What’s your favorite El- name for girls?