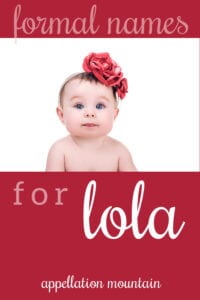 Formal names for Lola range from traditional Dolores to modern favorites like Harlow.

Does Lola require a longer version? Not at all. It appeared as an independent given name from 1880 into the 1970s, and for most of the twenty-first century, too.

But there are good reasons parents might seek out a longer name, and unlike Katherine for Kate or Abigail for Abby, there’s not exactly an automatically associated formal name with Lola.

The Broadway musical turned 1958 hit movie Damn Yankees tells us that whatever Lola wants, Lola gets.

But what do Lola’s parents want to put on their daughter’s birth certificate?

Lola as a given name is firmly established.

Way back in the late nineteenth and early twentieth centuries, Lola routinely ranked in the Top 200, peaking at #99 in 1904. While it’s back today, it remains slightly less popular. As of 2020, Lola stood at #240.

Parents today grew up singing along to The Kinks’ famous song, but somehow Lola’s “L-O-LA, Lola” refrain sounds more playful than shocking. After all, the song was a hit way back in 1970. That’s not exactly ancient, but it’s firmly in the history books.

Something else has changed over the years, too. During the nineteenth century, Lola Montez was a dancer – Irish, but passing as Spanish – and mistress of the King of Bavaria. Through the 1950s, her story was regularly re-told in pop culture, across movies and novels. She’s less a household name today, but the image of Lola as a showgirl persisted for generations.

Except again, time passes. And Lola now fits in perfectly with so many names we love for our daughters: Lily and Lila and the equally musical Leyla, to list just a few of the very popular L-l names dotting the popularity charts.

No formal name is required for Lola.

But what if parents prefer formal names for Lola?

The most traditional of formal names for Lola? It’s gotta be Dolores.

Dolores comes from a title of the Virgin Mary in Spanish, Nuestra Señora de los Dolores – Our Lady of Sorrows.

That sounds bleak. But it’s also deeply spiritual, a meditation on Mary’s suffering. And there’s beauty and strength in that, too.

Plus, while Dolores might sound dated in the 2020s, it was a smash hit in the 1920s and 30s, reaching the US Top 20. Credit goes to Mexican-born megastar Dolores del Río – born María de los Dolores.

Still, the name has gone from spiritual to glam to just plain out-of-favor.

It sounds like a stretch, but the “lo” sound is used in other languages. In Polish, for example, Karol – Charles – becomes Lolek for short.

So Caroline and Charlotte called Lola is a stretch, but only a little one.

The sparky, retro Carlotta makes the connection to the ‘lo’ sound even clearer.

No question that the ‘lo’ sound comes through loud and clear with Chloe.

Not only is there clearly a ‘lo’ to build on, but Consuelo shares several characteristics with Dolores, It’s also from a Spanish title of the Virgin Mary – Nuestra Señora del Consuelo, or Our Lady of Consolation. And there’s a beguiling historical figure for this name, too – Gilded Age heiress Consuelo Vanderbit.

More obvious choices include Ellie, Nora, and even Nell, but the letters are there for Lola, too.

This might seem like an unlikely way to get to Lola, but a handful of Elizabeths have answered to the nickname.

A pretty French name, Elodie could easily shorten to Lola.

The most obvious of the El- options to get to Lola, Eloise’s strong o sound makes it a good candidate.

A name straight out of Irish legend, with the requisite -ola ending.

We shorten Florence to Flo, so why not drop the F and call her Lo … la?

Originally from another Spanish title for Mary – María de Gloria – rich and meaningful Gloria benefits from a lighter nickname option.

The strong ‘lo’ sound of Harlow makes Lola a match, thought it’s not any briefer than the original.

It’s easy to imagine a young child tripping over Laura’s aur sound and calling an aunt or a little sister Lola instead.

With the double Ls and the Lo in the first syllable, Lorelei seems like a fit.

The French place name peaked back in 1928, but never really caught on. Lola follows naturally from Lorraine.

Evergreen classics for girls, sophisticated Louise and Louisa encourage playful, accessible nicknames. Along with Lulu and Lula, Lola is a perfect candidate.

Surnames like Lowell and Lowery aren’t common for our daughters (or sons, come to that), but they could work – especially thanks to fresh nickname option Lola.

Southern and dramatic, Magnolia often shortens to Nola, just a step away from Lola.

A surname like Lowell and Harlow, and a name with the right combination of letters waiting, too.

A favorite in the key of Harlow.

Like Caroline and Charlotte, these feminine forms of a masculine favorite all have multiple nickname options. But Nicola, Nicole, and Nicolette – along with other spins on Nicholas – might just lead to Lola, too.

A Spanish name meaning dove, Paloma requires no nickname, but Lola could work.

Popular Penelope comes with plenty of potential nicknames, but I’d add Lola to the list, too.

A traditional but seldom-heard choice, elaborate Philomena is made more accessible by a friendly nickname.

Cousin to shalom, Salome means peace. Sal and Sally seem like obvious short forms, and yet Lola seems like a better style fit.

Another -lo ender, Shiloh earns a place on this list.

Shortening a one-syllable name with a two-syllable nickname seems counter-intuitive. And yet, Sloanie isn’t much of a pet name, so maybe Lola works.

Like Nicola and Magnolia, the ending makes this a candidate.

A modern -lo ending name that seems like a stretch … but could work.

Probably a Spanish cousin to Violet via Violante, Yolanda seems a little old-school. That makes an upbeat nickname name like Lola the perfect option.

Would you consider any of these formal names for Lola? 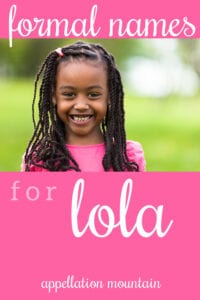