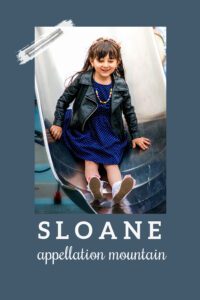 The baby name Sloane traveled from fashionable London to suburban Chicago and sunny Los Angeles before becoming a mainstream favorite.

Thanks to Christy for suggesting our Baby Name of the Day.

As you can probably guess, the baby name Sloane started out as a surname.

It comes from the Gaelic O’Sluagháin – raider. As in pirate or marauder or football team.

But in the 1980s, Sloane took on a very different association, thanks to Lady Diana Spencer.

Right before she became the most famous woman in the world, Diana belonged to a circle of young, well-born Londoners. Their address of choice? A Chelsea neighborhood called Sloane Square. That, naturally, made them the Sloane Rangers.

The world watched as Lady Di became a princess in a fairytale wedding broadcast around the world. We all learned the term Sloanie – the rough equivalent of “preppy” in 1980s American slang.

Named for Sir Hans Sloane, an eighteenth century physician and landowner, Sloane Square remains quite stylish all these years later. Think reality series Made in Chelsea.

Of course, it’s no surprise that Sloane didn’t catch on back then. It was understood that Sloanie wasn’t exactly praise – and certainly wasn’t considered a given name.

It wasn’t much longer until Sloane transitioned to given name status.

The year was 1986. Matthew Broderick was Ferris Bueller. And Ferris? He was taking a day off.

The John Hughes classic sent Ferris on adventures across Chicago in the company of his best friend Cameron and girlfriend Sloane.

The movie was a box office hit. Four decades later, it remains a favorite for many.

You might expect that the name baby name Sloane would have taken off, bolstered by the combined power of Diana and Ferris. After all, Cameron got a big bump in the 80s.

That’s not what happened.

A handful of uses kept the name in the public eye, like essayist Sloane Crosley’s best-selling I Was Told There’d Be Cake.

But it would take one more pop culture push before the baby name Sloane started to climb.

FROM LONDON TO LOS ANGELES

In 2004, the world met Vincent Chase, a rising star in a fictional/but not version of Hollywood. The headliner of Entourage was, obviously, surrounded by his friends and family.

How high will it rise?

It’s sleek and modern, a cool and sophisticated name for a daughter. But it’s joyful, too. And just like Blair echoes classic Claire, Sloane’s success owes a little something to the time-tested Joan.

Parents who love Harper and Grace might agree on the baby name Sloane.

It’s a sister for Sutton, an alternative to Quinn.

And for now, it’s a just slightly unexpected name that feels effortlessly stylish.

What do you think of the baby name Sloane? Do you prefer it with or without the e? 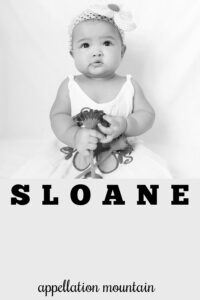