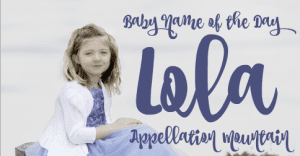 Lola has long been musical, from Broadway to rock ‘n’ roll.

But in the beginning, this was a deeply spiritual name, associated with Mary, Our Lady of Sorrows. In Spanish, it’s Nuestra Señora de los Dolores or María de los Dolores.

Lola started out as a nickname for Dolores, and the nickname was popular in the same era.

Lola Montez was Irish by birth, spending her early years in India, where her father and then stepfather were stationed. By 1837, she’d reinvented herself as a “Spanish dancer” with her new stage name. In 1846, she became the mistress of King Ludwig I of Bavaria.

The king made her a countess, and showered her with gifts. But the foreigner proved unpopular, and Ludwig set her aside.

She’d later tour the United States and Australia, finding success in both places, though her life was tumultuous. She died at the age of 39. Her gravestone reads “Mrs. Eliza Gilbert.”

This was also the role that made Marlene Dietrich famous.

In 1930, she played a cabaret singer called Lola-Lola in German film The Blue Angel. The movie that led to her contract with Paramount Pictures, and lends this name a certain amount of Hollywood cachet.

Musical sensation Damn Yankees gives us another temptress by the name.

The devil makes a deal with an ordinary Joe. Joe is transformed into a baseball player able to lead his team to victory against the New York Yankees – hence the title. But it means that Joe has to leave behind his beloved wife.

Joe wavers, and considers exercising the deal’s out clause, so the devil sends in his best home wrecker, who sings her warning: “Whatever Lola Wants.”

Vladimir Nabokov’s scandalous 1955 novel Lolita is the story of a man in love with a girl, and the ensuing tragedies. It’s considered a literary masterwork, and a popular movie adaptation followed in 1962.

Lolita may have hastened the name’s fall. While the name held on in the US Top 400 through the 1950s, it dropped sharply from the movie’s release, until it finally left the Top 1000 in the 1980s.

The Kinks scored a hit in 1970 with their song by the name, with the famous refrain “L-O-L-A, Lola.” If it wasn’t Nabokov’s novel, perhaps it was the song.

Barry Manilow gave the name to a showgirl in his 1978 single, “Copacabana,” but by then, the name was fading fast.

In 1996, this name was given to the animated bunny-love interest of Bugs in big screen animated feature Space Jam.

Then came 1998’s Run Lola Run. The German thriller starring Franka Potente as a woman out to save her boyfriend. It was a hit internationally, and seems to be the reason parents started to rediscover the name – at least in the US.

In 2000, Lauren Child created the very popular fictional siblings Charlie and Lola, and it was official – this name would suit a daughter born in the twenty-first century.

Lola: To the Nursery 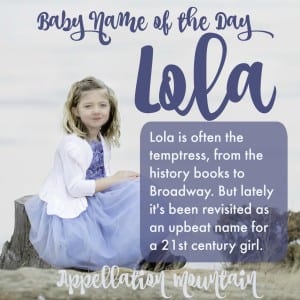 A century after its peak, Lola has once again cracked the Top 100 throughout Europe, including Belgium, Spain, France, and the UK in recent years. At #236 in the US, Lola is relatively rare.

But the name may have farther to rise. Empire gave it to a young girl in the show’s first season.

Dolores remains in hibernation. A mere 42 girls were given the name, versus nearly 1,400 newborn Lolas. But other formal names might work.

Overall, this feels like a breezy, modern choice for a daughter, though one that might surprise the grandparents.

Would you consider Lola for a daughter? As a formal name, or only as nickname?