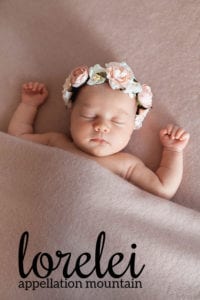 Lorelei is a fanciful German choice boosted by a popular dramedy.

Thanks to Dirty Hippy for suggesting our Baby Name of the Day.

German folklore gives us Rhine maidens, a mix of mermaid, shape-shifter, and siren. They lured sailors to their deaths on the treacherous rocks of the Rhine River.

One especially dangerous boulder shared its name with one of the maidens – Loreley.

Legend says she’s the ghost of a lovesick maiden, drowned in despair.

Poets, composers and painters have been inspired by her tale for generations:

The name comes from the murmuring sound of the water – lurlei or lureln – or maybe from the same root that gives us the verb to lure, plus the word ley, from a Celtic word meaning rock.

A handful of women were named after the poetry and operas, but it took a comic novel by Anita Loos to boost the name. Her 1925 bestseller was the story of a stenographer from Little Rock who shot a would-be suitor for his unwanted advances. The judge’s sentence?  He re-named her Lorelei and packed her off to Hollywood to use her beauty for good. She ends up in Europe, on madcap adventures with her BFF, Dorothy. All ends well.

It became a comic strip, a 1928 movie, and then a 1949 Broadway musical.  But it was 1953’s big screen extravaganza that cemented the story in our memories. Gentlemen Prefer Blondes starred Marilyn Monroe as Lorelei.  The diamonds and pink dress are iconic – years later, Madonna borrowed her character for her “Material Girl” video. We all recognize it, even if we’re not exactly sure about the backstory.

As the various adaptations of Loos’ story succeeded, more girls received the name. Lorelei hugged the edges of the US Top 1000, breaking in multiple times, from the 1930s into the 1960s.

But it took the small screen to make the name a hit.

The Gilmore Girls debuted in 2000. The show used the variant spelling Lorelai for its two main characters – a mother-daughter duo. The mom used the name in full, while the daughter was known as Rory. We eventually learned that they weren’t the first to bear the Gilmore family name. Rory’s late great-grandmother was yet another Lorelai, but she answered to Trix.

The show was a major success, and the name caught on – maybe because the mom and daughter both showed how wearable the name could be.

That’s not too common, and yet, it’s also not exactly rare. It hits a sweet spot for plenty of parents.

Plus, it feels like a spin on the classic Laura, and boasts nickname options like Lola and Rory.

If you’re looking for something a little bit sparkly, with hints of German heritage but a current feel, Lorelei might be the name for you.

Would you consider this name for a daughter? Do you like the -lei or – lai spelling better? 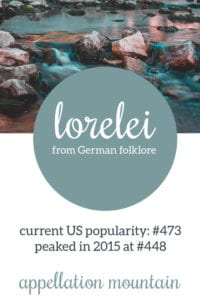