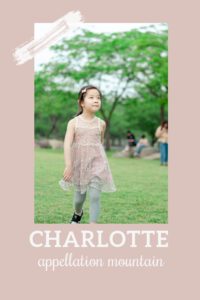 The baby name Charlotte feels traditional, polished, and ever so royal.

Thanks to Lem for suggesting our Baby Name of the Day.

Way back in 1880, and well into the 1950s, the baby name Charlotte appeared in the US Top 100 or thereabouts nearly ever year. It fit with other evergreen classics, like Elizabeth and Margaret.

The name traces its roots to the Germanic Karl – man. In Latin, Karl became Carolus, the root of Carol, Carolina, and Caroline. In French, Carolus led to Charles.

Still can’t there from here? Charlot, with a silent ‘t’ – think Margot – served as a nickname form of Charles. And that, in turn, gave us the feminine Charlotte.

The Dictionary of Medieval Names from European Sources lists the name as early as 1493.

The Normans brought Charles to England, but it took centuries for the feminine forms to become mainstream.

Charlotte appears among the ruling family of Cyprus, making it one of those quirky medieval crusader state names. (Her little sister was Cleopha.)

But it slowly made its way across Europe. First came Charlotte of Savoy, a fifteenth century Queen of France, named for her grandmother, a Queen of Cyprus.

Russian and German royal family trees include the name. Eventually, a German princess, Charlotte of Mecklenburg-Strelitz, married King George III and brought the name to England. If you’ve been watching Bridgerton, you’ve seen a fictional version of Queen Charlotte presiding over debutante presentations at court and scheming with Lady Danbury.

George III and Charlotte gave the name to their daughter. She married a German prince.

The future King George IV – son of Queen Charlotte – also gave the name to his firstborn daughter. That princess, Charlotte Augusta, would have ascended to the throne. Except she died in childbirth.

The crown passed to Queen Victoria instead, and the rest is history.

But the name has remained in use, including among British aristocrats and royals.

When the Duke and Duchess of Cambridge welcomed their daughter in 2015, it seemed like such a logical choice that the bookies called it in advance.

This name isn’t all tiaras and state dinners.

Though, of course, in that last one, Charlotte is the spider, not the little girl. (The girl is named Fern.)

In 1793, French revolutionary Charlotte Corday assassinated fellow radical Jean-Paul Marat. Marat became one of the most outspoken members of the revolution, merciless towards his enemies. Corday was among those preferring a more moderate approach. She murdered Marat in an attempt to silence the more extreme viewpoints. Instead, her efforts backfired, and she went to her death by guillotine not long after.

Many considered Corday heroic at the time, and she’s been immortalized in stories. There’s even a 1989 opera version of Corday’s tale, composed for the 200th anniversary of the French Revolution.

Back to the numbers for a minute.

By the 1960s, the baby name Charlotte was falling. Hush … Hush, Sweet Charlotte sounds like a lullaby, but it’s actually a 1964 Southern gothic thriller starring Bette Davis. Davis plays a young Southern belle in love with a married man. When he meets a gruesome death, everyone assumes she’s responsible. The movie re-opens many years later, with Davis living as a recluse, one with a tenuous grip on reality.

Or so it seems.

It’s a dark and twisted tale, but it’s also a long-standing favorite. It racked up seven Academy Award nominations, and is now considered a classic.

Maybe that helps explain why Charlotte plummeted in the 1970s and remained out of favor well into the 1990s.

CHARLOTTE in the CITY

That’s when HBO original series, Sex and the City introduced us to Carrie Bradshaw and her three besties: Miranda Hobbes, Samantha Jones, and Charlotte York.

Charlotte serves as the most conservative member of the quartet. Park Avenue-dwelling and marriage-minded, she does everything exactly right. Until her picture-perfect marriage falls apart, and she’s forced to reinvent herself – and find true love along the way. Kristin Davis played the part, and instantly re-invented her character’s name.

And when the second of the feature full length films based on the series debuted in 2010? The baby name Charlotte ranked #46.

The name continued to chug its way up the popularity charts.

By the time we learned Will and Kate were expecting again, the name was wildly popular. The very same week the world met Princess Charlotte Elizabeth Diana of Cambridge, we also learned that the name had entered the US Top Ten.

All of this makes the baby name Charlotte a polished classic, the feminine equivalent of William or James.

It works without a nickname, but Charlie and Lottie are both easy options.

With the princess very much in the spotlight, and Charlotte York returning for a Sex and the City sequel soon, it’s very possible that we’ll keep hearing more and more of this lovely, traditional name.

What do you think of the baby name Charlotte? 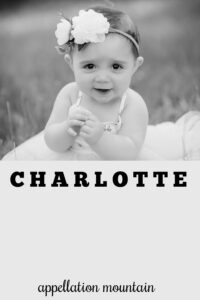