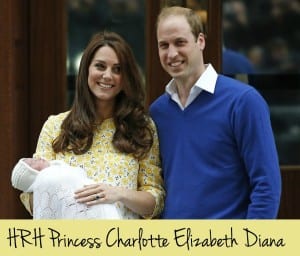 And so I’m delighted to be completely wrong – and quite happy for all those who placed a successful bet on a new Princess Charlotte!

The baby will be known as Her Royal Highness Princess Charlotte of Cambridge.

Charlotte – An earlier princess Charlotte was the only daughter of King Charles IV. She would have been queen, but she died in childbirth. Instead, Queen Victoria ascended the throne. It’s a very popular name in England (#21) as well as the US (#11). Kate’s sister, Pippa, is Philippa Charlotte.

It could possibly honor both grandpa Charles, the Prince of Wales, but also grandma Carole. All three names come from the Germanic Karl – “man” via the Latin Carolus.

Elizabeth – Here’s the name nearly every one predicted: Elizabeth in the first middle spot. Not only is it the name of Charlotte’s great-grandmother, the long-reigning Queen Elizabeth II, it’s the middle name of both Kate and her mother, Carole Middleton. And also? It’s as royal as royal gets!

Diana – Now here’s the surprise, and the name to talk about! The couple honored Will’s late mother, the beloved Lady Di, with their daughter’s second middle. To be honest, I didn’t think they would! But another royal watcher pointed out that Will gave Kate Diana’s engagement ring, so it’s not the first time that they’ve publicly honored the late princess. Prince George is George Alexander Louis. It’s a royal name, but Alexander isn’t common in the British royal family. So Diana mirrors that departure from the strictest of tradition.

And there you have it! A new princess with a traditional and lovely name.

What do you think of Charlotte Elizabeth Diana?