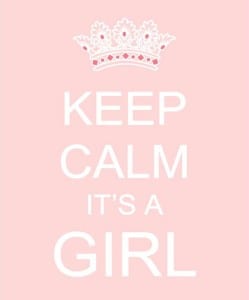 Huzzah! There’s a new princess in Kensington Palace. The Duke and Duchess of Cambridge have already whisked their new daughter home, less than a day after Kate gave birth, and London is set to light up their landmarks pink tonight.

It will likely be a few days before we have an official royal baby name announcement, but we’ve all been speculating wildly for months.

My first thought was that I had nothing new to add. Bookmakers favor Alice or Charlotte.

But I thought it might be fun to take a look at all of the names given to royal princesses, starting with the children of King George III at the end of the eighteenth century. I’ve added in Princesses Beatrice and Eugenie, too – because their names are just too great to ignore!

I’ll make my own guess at a name for the new princess at the end of this post.

Alexandrina Victoria – There was much controversy over the future Queen Victoria’s given name. The future George IV was Prince Regent at the time of her birth, and had the right to approve his niece’s name. He rejected Georgina, Augusta, and Charlotte, before finally agreeing to Alexandrina. The name came from one of her godparents, Emperor Alexander I of Russia.

Anne Elizabeth Alice Louise – The second child and only daughter of the current Queen Elizabeth II. She’s styled the Princess Royal, but chose not to accept titles for own children. Anne has three granddaughters, thanks to her son Peter Phillips, father to Savannah and Isla, and daughter Zara Tindall, mother of Mia.

Charlotte Augusta – The only child of King George IV, Charlotte would have been queen – but she died in childbirth at the age of 21.

Louise Victoria Alexandra Dagmar – King Edward VII, the eldest son of Queen Victoria, had three daughters. Louise was the eldest, and given the title Princess Royal.

Mary – Another daughter of George III.

Victoria Alexandra Alice Mary – King George V – the grandfather of the current queen – had five sons and just one daughter. The princess was named in honor of her great-grandmother, the formidable Queen Victoria, but know by the more approachable Mary. Queen Victoria was still alive when Mary was born in 1897 – the year of Victoria’s Diamond Jubilee. It’s said that the queen suggested that her granddaughter be named Diamond in honor of the occasion. Just think – it could have changed the course of royal baby naming forever!

Victoria Alexandra Olga Mary – The second daughter of King Edward VII, the princess was known as Toria to friends and family.

And my guess … I’m going to go out on a limb and guess Helena Elizabeth Caroline. Why? Helena is just royal enough – William’s cousin Eugenie has it as a middle, and Queen Victoria had a daughter called Helena. Yes, the odds favor other names, and this is a longshot – but wouldn’t it be lovely if they did choose Helena?

When Charles and Diana welcomed Harry, I remember hearing that they had more freedom to name their second son, since it was less likely that he’d ever be king. Not that Henry Charles Albert David isn’t a completely royal appellation.

As for Elizabeth, word is that the queen doesn’t want a namesake – but wouldn’t it be crazy to not give the long-reigning queen’s name to a great-granddaughter so close in line to throne? (Note: Thanks for the comments! I originally – mistakenly – referred to the new princess as the queen’s first great-granddaughter. Not so!)

I had Diana in the third position for a while, but you know what? I just don’t think Will and Kate court controversy like that. And it might be hurtful to his dad and grandmother, so … no. I don’t think it’s impossible, but I’m going to go with Caroline.

Charlotte is another name I considered for the third spot, but here’s the thing about Charlotte: it was the name of the princess expected to become queen. She died in childbirth, and Queen Victoria took the throne instead. All’s well that ends’ well, but I wonder if Charlotte wouldn’t be perceived as unlucky for a child so high in the line of succession, at least as a first name?

I would probably have added Louise or Alexandra. Royals do repeat names, even among siblings. But somehow that seems like an odd thing to do, at least when you’re only on baby #2, and there are plenty of name possibilities available.

If I were a betting woman, that’s where I’d put my money!