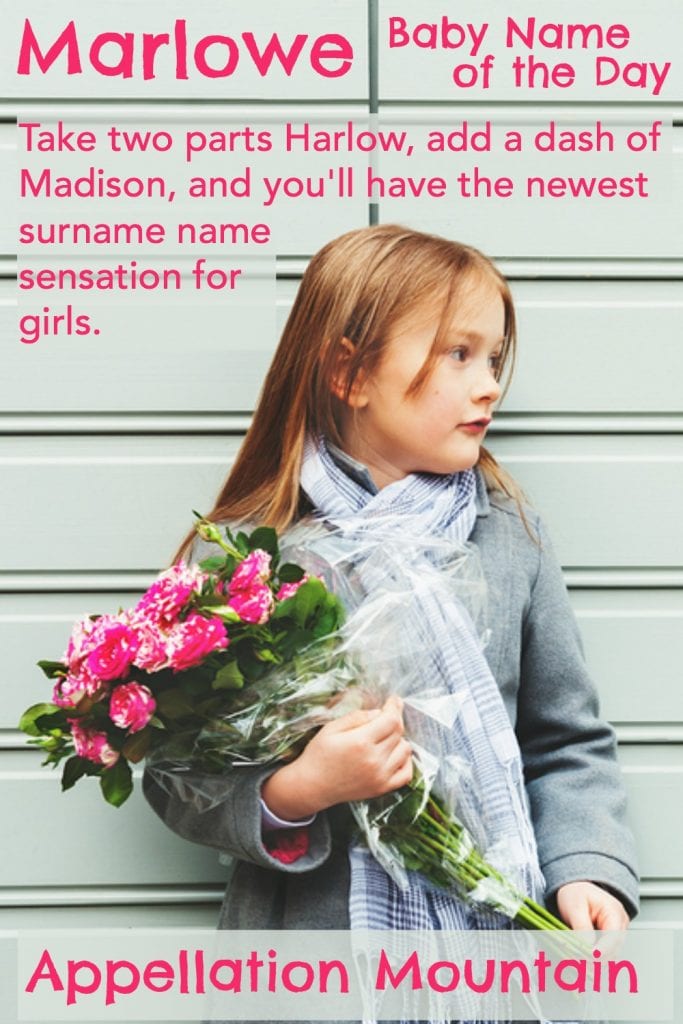 Amber named her new baby girl Marlow – after punking us all with a birth announcement for baby Dauphinoise.

The more letters, the more popular the spelling.

None of the three rank in the US top 1000 yet, but that’s almost certainly going to change.

Why does the -owe version come out ahead? Maybe it’s because the two most notable bearers of the name use that spelling.

Poet and playwright Christopher lived in the same era as William Shakespeare. But Kit Marlowe died young, stabbed to death under mysterious circumstances after being arrested. He lives on in popular culture, from Shakespeare in Love to spins on his most memorable work, Doctor Faustus.

The detective debuted in 1939’s The Big Sleep. A veteran of countless short stories, novels, and adaptations galore, Philip continues to fascinate. Humphrey Bogart played the part in 1946. Liam Neeson is set to take on the role in an upcoming film.

The surname predates the playwright and the sleuth, of course. It comes from the map. In Old English, it means remnants of the lake – a boggy area.

On a more poetic note, some sites give the meaning as “driftwood” or “storyteller.” But I can’t confirm those origins.

Marlo – hold the -owe – also traces back to Margaret and compound Mary names, like Mary Louise.

With the exception of Marlo, none of this makes the name expressly feminine. Marlo Thomas, of That Girl fame and a long-time advocate for St. Jude’s Children’s Research Hospital, tips it towards Team Pink.

But Nip/Tuck gave us a male Marlowe during 2006’s fourth season. Joseph Conrad’s Heart of Darkness is narrated by Charles Marlow, mostly referred to by his surname.

And yet, the numbers give this one to the girls.

Besides Ms. Thomas, a handful of parents might think of Loni Anderson’s character on long-running sitcom WKRP in Cincinnati. Loni played Jennifer; the -owe spelling was the character’s last name. But that feels way too obscure to influence parents four decades later.

Put it down to pure sound. Harlow followed Harper up the charts. Harper dethroned Madison as the go-to surname name choice for girls. Take one part Harlow, factor in Madison’s M, and the rise of this name for girls feels inevitable.

Celebrities have embraced this one. Besides Tamblyn’s new arrival, there’s also:

We love o-ending names for girls, like Willow and Margot. Plus, surname names show no signs of slowing down.

Wrap it all up, and chances are that Marlowe will crack the US Top 1000 very soon, and move right up the charts.

Which spelling do you prefer? Have you been hearing more of this name?