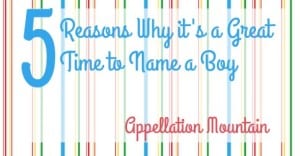 It’s a great time to name a boy!

Parents often say that it’s harder to name a son than a daughter. The pool of possible names is smaller, and it’s tough to know if a given name will “go girl.” We fret that a boy with an unusual or feminine name will be bullied. (Thank you, Johnny Cash.)

Despite all of this very real anxiety, there’s never been a better time to name a boy. Don’t believe me? Let’s see if I can change your mind!

Names for Boys: By the Numbers

Parents are becoming much more daring when it comes to naming a son. That’s not just my guess, either. The numbers back it up!

Those numbers are striking for two reasons: first, even the most popular name in the US is relatively uncommon compared to generations past. Second, it suggests that, boy or girl, parents are inclined to get creative when choosing names.

That good news for everyone.

If you’re a conservative namer, there’s less chance that your William will be one of three in his class. And if you’d like to try something more daring? You’re not alone, and that means that your son is much less likely to stand out because his name isn’t traditional.

Names for Boys: The Beginning of Endings 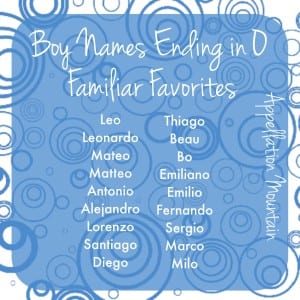 For generations, Matteo moved to the US and became Matt, Jose became Joe, and Mikhail stayed Mischa at home, but Mike in public.

What explains the change? So many things. An increase in Spanish language speakers might make romance language names seem more familiar. Our definition of what’s acceptable for boys and girls has broadened. And as handful of those names become familiar and mainstream, more names follow. So thank you, Leo, for making Aldo, Nico, Bruno, and Hugo seem perfectly wearable. 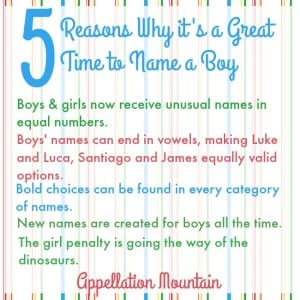 Looking for an uncommon Old Testament name? Hezekiah and Obadiah are almost as reasonable as Noah.

Want to acknowledge a personal hero? Lennon and Hendrix are just two of the musical surname names we’ve embraced for boys.

Do modern virtue names appeal to you, names that set the bar high for your child? Legend and Maverick are both in the current US Top 1000.

Prefer your names short and punchy? Jax is a sensation, and there are plenty of similar names to consider.

No matter your style, plenty of bold boy names have graduated from nicknames and fictional characters to real, live, on-the-birth-cerificate possibilities.

Speaking of Jax, for many years we didn’t innovate with names for our sons the way we did when naming our daughters.

In 1914, names like Orene, Olevia, Bettye, Marybelle, Theola, Hildred, Neoma were on the fringes of the girls’ Top 1000. Sure, there were boys called Burdette and Loran and Rollie. The fringes are always been an interesting place.

But over the years, new and innovative girls’ names rose to the top, while the most popular names for boys tended to be borrowed from the Bible or from history. Our sons stayed Robert and Michael while we named our daughters Jennifer and Ashley.

But that’s changed in recent years. Jayden cracked the US Top Five, despite basically not existing before the 1970s. Surname names like Tyler and Mason have, too.

We’re free to innovate when naming our sons, and that’s a good thing.

Conventional wisdom dictates that when a name becomes popular for girls, we consider it off limits for boys. I think that’s changing, and here’s why:

I think this trend will accelerate. The generation approaching parenthood in the next decade or so grew up in a world of girl-Jordan and boy-Jordan. Taylor Swift dated Taylor Lautner. The world continued to rotate on its axis.

Could it be the end of the girl penalty, the requirement that we forfeit any boys’ name that seems like it could possibly be drafted by Team Pink?

Do you think it’s easier or harder to come up with names for boys? Do you agree that parents are becoming more daring when naming their sons?