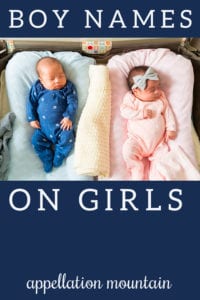 Need proof? Tell the people of the internet you plan to name your daughter Owen or Parker or James.

Then run for cover.

Sure, some people will respond positively. But depending on the forum, you could also find yourself accused of thievery, trendiness, and general bad taste.

It is so very frustrating to feel like your favorite boy name is now unusable. Because this doesn’t go both ways nearly as often – rarely do we see boys borrow from the girls, or reclaim names from the feminine side. (Not never – Pax is one notable exception. Jamie might count, too. But exceptions are few.) That’s one reason why the pool of possible boy names feels smaller – or maybe more limited – than the choices for our daughters.

Make no mistake, this is a touchy subject. And yet, reasons abound for viewing boy names on girls as nothing to worry about.

TEN: BOY NAMES ON GIRLS ARE NOTHING NEW.

Long before there was Madison, there was Shirley.

Charlotte Bronte chose the name for the heroine of an 1849 novel, explaining that Shirley’s father had hoped for a son. It was gaining steadily in use in the US when Shirley Temple became a household name. The name Shirley peaked at #2 in the 1930s, and today? It’s hard to imagine parents choosing Shirley for a son.

Or a daughter, come to that.

Countless names have followed similar paths, including Ashley and Courtney, Beverly and Joyce. Our memory is short, and while this feels like a new phenomenon, it’s a tale as old as time.

Many of us assume that once, maybe even recently, every name neatly corresponded to male or female, with no overlap. Think about it, though, and logic dictates this can’t possibly be true.

Andrea is masculine in Italian. So is Elia. Romance languages blur the lines.

But even within English, the story quickly grows complicated. An oft-cited early theft? Evelyn. You might know that male writer Evelyn Waugh married a woman with the same first name.

Only it didn’t start out as a given name at all. Evelyn began as a surname, given to boys – but ultimately derived from Aveline, which was feminine. Aveline faded, but was revived as Evelina … and Evelina shortened to Evelyn.

Some languages dictate that certain sounds belong to feminine names, while others are strictly masculine.

But that’s not universal. Hebrew, for example, offers dozens and dozens of truly unisex names.

Some might argue that English is closer to Hebrew than, say, Spanish. After all, Kate is a (almost certainly) a girl’s name,  while Nate reads boy. And Tate? That depends.

If your language doesn’t insist upon clear rules, it opens the door to individual perception.

SEVEN: THE RULES WE DO HAVE? THEY LEAD US ASTRAY.

Do some parents go out of their way to research masculine names for their daughters? Probably.

But most simply hear a name and think it sounds feminine.

Take Avery. With Ava and Emily so popular, you might expect Avery to become a powerhouse – and it has. There’s no Madison without Madeline and Alison (which isn’t stolen from the boys at all – it’s a diminutive form of Alice, with history tracing back centuries.) Aubrey caught on because of a Bread song … and the well-established girl’s name Audrey.

Since sound is the only thing to go on, we’ll always get it wrong.

Too often, our sons receive family names. Our daughters? They’re given names that are pretty.

But when you do encounter a family naming tradition, there’s a good chance it might be applied in a gender neutral fashion. This seems more true in the American South and perhaps New England, but examples are heard everywhere. Years ago, I asked a neighbor what she was planning to name her baby if it was a boy. She responded with her maiden name – something along the lines of Parker. And if it’s a girl? She laughed. Parker.

It’s nicely egalitarian, and might be worth embracing. Or, to think of it another way, it’s a shame to never use a beloved family name simply because you don’t have a son.

Even families without specific traditions sometimes find themselves drawn to a specific name.

Kate Garry Hudon’s masculine middle acknowledges the passing of her uncle Garry, who died shortly before her birth. Similarly, Blake Lively might be comfortable with boy names on girls – but she and husband Ryan Reynolds named daughter James for Ryan’s departed dad.

Sometimes the idea of saving an honor name for a future son misses the point – it’s this pregnancy, and this child’s life connected to a specific moment.

FOUR: IS IT REALLY STEALING IF IT’S SITTING IN THE RECYCLE PILE?

Sometimes a name rises in use for boys and girls at the same time, and slows down for our sons as it gains blockbuster status for our daughters.

But that’s not a rule.

At other times, a masculine name is languishing, all-but-forgotten.

Some Laurences used to shorten their name to Lauren. And a small, but steady, number of men were named Lauren in the US. Just enough to put Lauren on the edge of the most popular boy names in the US for years.

But then Betty Joan Perske adopted the stage name Lauren Bacall, and it became a sensation for our daughters.

Was it a tailored twist on classic Laura? Or a straight-up hijacking of a boys’ name? It feels more like the former than the latter.

For an even more dramatic example, take Madison. The name left the boys” Top 1000 in the US after 1952. The movie Splash launched the name in 1984. Parents who considered the name Madison for their daughters knew all about Madeline and Allison, but probably had never encountered Madison as masculine.

If parents aren’t using it, does it stay in the vault? It seems open to re-discovery … even if that means we choose it for our daughters instead.

THREE: NAMES CAN – AND DO – HOLD STEADY AS UNISEX OR MASCULINE – EVEN WHEN THEY’RE USED IN BIG NUMBERS FOR GIRLS.

Girls have been named Dylan, Cameron, and Ryan, but all three of those names remain decidedly more popular for our sons.

Other names, like Rowan and Jordan, hold steady as unisex for years.

We can’t know what will happen, of course. But it’s a good reason to feel confident that your favorite boy name won’t be unwearable because of a television character/celebrity parent/someone commenting on an online forum adopted the name for a daughter.

TWO: A NEW GENERATION MINDS ALL OF THIS MUCH LESS.

Can you find girls who dislike being mistaken for a boy based on their name? Probably. And boys can object to meeting a girl who shares their name.

But the more common it becomes, the less anyone minds. The more we pause and ask if Charlie or Alex or Riley or Quinn is  a boy or a girl. (Or don’t ask at all, because so often, it really doesn’t matter.)

And, of course, our kids surprise us. Because my son has played sports with a boy named Kelly. I’d asked if Kelly was a girl, and my son sputtered. “Who names a girl Kelly?” He knew one person with the name. That person was a boy. Obviously, it was a boy’s name. What a crazy question to ask!

ONE: THE PROBLEM ISN’T BOY NAMES ON GIRLS. IT’S THE IDEA THAT OUR BOYS CAN’T SHARE A NAME WITH SOMEONE ELSE’S DAUGHTER.

It’s worth recognizing if your choice is controversial – and deciding how you feel about that in advance.

But ultimately, boy names on girls are only a problem when we behave as if being used for girls somehow taints names, making them less appropriate for our son.

SO … SHOULD YOU USE BOY NAMES ON GIRLS?

My main objection to boy names on girls isn’t about shrinking the pool of possible names for our sons.

It’s the idea that finding strong names for our daughters somehow requires eschewing anything feminine. Eleanor and Ruth find this idea ridiculous. Actually, so do Nancy and Amy and Angela and Marie and Christine and hundreds of other names, all worn by women who have excelled in any number of fields.

Tailored favorites, like Claire and Jane and Helen and Katherine, all feel conventionally and traditionally feminine without being frilly. But does it matter? Just look at the Forbes 100 index of the world’s most powerful women. For every Judith, there’s a Vicki.

Don’t embrace boy names on girls because it’s the only way to find strong names for our daughters. But if other reasons make a traditionally masculine name a compelling choice? Then proceed … with your eyes open.

How do you feel about boy names on girls? Have you ever considered BNOGs for your family?