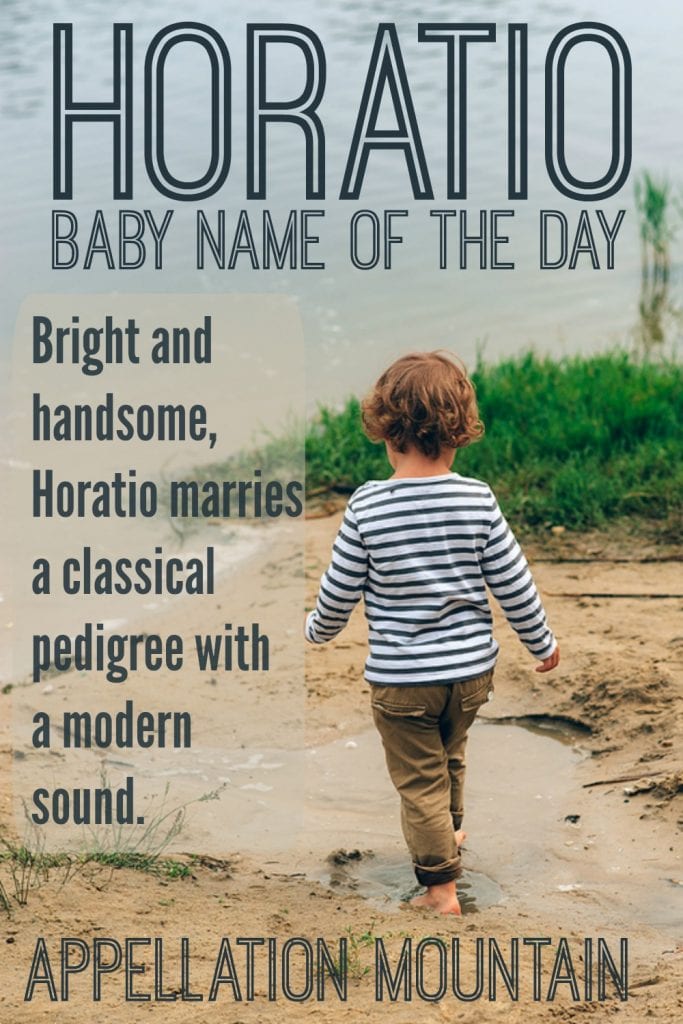 Horatio appears in history, literature, and on the modern small screen. And yet this name trends towards obscurity.

Thanks to Paul for suggesting our Baby Name of the Day.

Back in the first century BC, Quintus Horatius Flaccus penned some of the greatest works of the Ancient World. We know the poet as Horace. Even if you don’t recognize the name, you’ll know his words. Carpe diem, anybody?

The name comes from hora, the Latin word for hour or time, making that business about carpe even more appropriate.

Along with Homer and Virgil, Victorian parents with an affection for the classics embraced Horace. The name ranked in the US Top 100 most years through 1902, and remained in the Top 250 into the 1940s.

Horatio, on the other hand, has never really caught on.

And yet the name remained in use over the centuries.

Shakespeare used it for one of Prince Hamlet’s hangers-on.

Lord Nelson answered to the name. Yes, that Lord Nelson, the one who defeated Napoleon at the Battle of Trafalgar. A famous statue to the admiral stands in London’s Trafalgar Square.

The war hero took his unusual name from his godfather, the 2nd Baron Walpole. His mother came from the powerful English political family. Most of the men in the family seem to be called conventional names like Edward and Robert, but there are at least five Horatios, along with a Horace.

CS Forester wrote the Horatio Hornblower novels between the 1930s and 60s. His fictional hero’s name nods to both the Hamlet character and the real-life admiral.

Gregory Peck starred as Hornblower in a 1951 movie. From 1998 through 2003, Ioan Gruffudd took on the role for an ITV and A&E production.

Just as Hornblower was ending its run on A&E, another small screen character gave it life.

David Caruso played a character by the name on CSI: Miami. The show debuted in 2002, and ran for a decade.

The combination of the literary figure and the small screen hero combined to briefly boost the name. By 2007, there were 40 newborn boys called Horatio.

We’re wild about o-ending names for boys lately. Leo, Mateo, and Theodore rank in the US Top 100. Choices like Arlo, Milo, and just-Theo feel like the most fashionable of choices for boys.

If Santiago can trend, why not Horatio?

A clever user list at Nameberry titled “My Braver Alter-Ego Would Totally Use These” included the name, along with Crispin, Thora, and Sylvanus. I think that’s exactly the right note. Parents may love the sound of this name, but it’s trending towards obscurity. A mere nine boys were named this in 2015. That’s fewer than Savior, Carrick, Ruston, or Flavio. In other words: seriously rare.

One challenge: despite the -o ending, this form of the name isn’t known in Italian or Spanish. It’s Orazio and Horacio, neither of which fared much better in recent years.

Still, bold namers after a stands-out, fits-in choice would be well advised to consider the historic, literary, and bold Horatio.

What do you think of this name? Does it have a chance of catching on?

First published on October 6, 2009, this post has been revised substantially and republished on April 26, 2017.