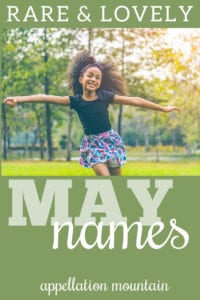 Rare May names range from the vintage to the modern, smooshes to inventions. But they all contain the bright, vibrant, and spring-like sound of May.

We love Mae, of course, so spare and lovely. The ‘e’ spelling appears in the current US Top 1000, while the ‘y’ does not. But the sound is everywhere.

Of course, names inspired by the month of May don’t have to include the sound. British Baby Names rounded up all of the saints and symbols associated with the month, including May, but also plenty of more subtle choices.

If you love Macy or Mabel, but want something that includes the sound, but feels far less expected, these rare May names are for you.

Annamae – It could be the name of Dorothy Gale’s BFF out in Kansas, a name both vintage and adventurous.

Bellamae – If you like the surname-style Bellamy, but prefer something more clearly in given name territory, Bellamae might appeal.

Ellamae – This feels like an inevitable mash-up of two popular short names, but only around 50 girls receive the name each year.

Lilymae – If April showers bring May flowers, then maybe Lilymae is a logical blend.

Lulamae – In Truman Capote’s Breakfast at Tiffany’s, we eventually learned that the glamorous Holly Golightly was born the downhome Lula Mae Barnes. I keep waiting for Lula to catch on, so why not Lulamae?

Maybelle – This looks like an elaboration of Mabel, but seems designed for a different sound: may belle rather than may BUL. Maebelle works, too.

Rosamae – There’s Rosalie and Rosalind, Rosemary and Roseanna. Why not Rosamae? Rose names are plentiful, and this one feels both vintage and vibrant.

Saramae – There’s something lovely about this sound, combining the sweet simplicity of Sarah and Mae.

Esmae – If you love rare May names, Esme might appeal – but spelling it phonetically clears up any pronunciation confusion.

Mabry – Mabry, Maebry, and Maybree seem like the most logical spellings, a mix of traditional Mae and breezy Bree. Surname Mabry may have come from the place name Maybury, or perhaps it’s from the French Montbrai – muddy hill. Regardless of origins, these rare May names have lots of appeal.

Maeby – This name wouldn’t make the list at all, except a few dozen girls were named after the Arrested Development character – and it certainly fits with rare May names.  Series creator Mitchell Hurwitz arrived at the rebellious teenage character’s name by blending his daughters’ names: Maisy and Phoebe.  While she was nearly always called Maeby, her given name was just Mae.

Maelynn – You’ll meet Gracelynns and Avalynns, so why not Maelynn? Plenty of spellings are seen.

Maisie – Maisie evolved a Scottish short form of Margaret, but it carries the Mae sound. Maisy is also seen, along with more inventive spellings.

Maven – A bold word name growing in use for girls, Maven comes from a Hebrew word, meaning “one who understands.”

Maybelline – A handful of girls have been named Maybelline dating back to the 1920s. That’s almost certainly thanks to the cosmetics company, founded in 1915, and named for the founder’s sister, Mabel, inspired the company. Chuck Berry recorded “Maybellene” in 1955; some releases of the single misspelled it with an -ine. Berry’s song was based on an older one called “Ida Red.” It evolved into “Ida May” and then the current form.

Maylee – We love Kaylee and Hailee and all of these names made from stylish sounds. Maylee seems to have a longer history of use than some rare May names, and debuted in the US Top 1000 in 2016.

Maysilee – The Hunger Games gave us dozens of spectacular names, including Katniss and Primrose and Finnick and Rue … and Maysilee. She’s a minor character, but a critical one. Maysilee’s niece, Madge, gives Katniss her famous mockingjay pin.

Maëlle – Familiar to French speakers, but seldom heard in the US, Maelle comes from the name of a fifth century saint. It’s derived from a Celtic word meaning prince. The pronunciation – Mae-elle – could work nicely in English, though the French is a little different, more like a drawn-out my-elle. The spelling, though, might prove vexing.

Maëlys – Cousin to Maelle, or possibly to another name on this list, Maylis.

Maeva – It sounds like an elaboration of the Irish Maeve, and maybe that’s sometimes true. But Maeva is also a Tahitian name meaning welcome, popular in French and accessible in English.

Maewyn – Possibly a masculine name, and sometimes said to be the birth name of towering St. Patrick, Maewyn sounds breezy and unexpected.

Mai – It means plum in Vietnamese and dance in Japanese, but perhaps it most feels like a culture-spanning choice that works across several languages, including English.

Maialen – I found this one on a list of Basque names; there’s a well-known Basque poet by the name. It comes from the classic Magdalene and Madeline.

Maylis – The name of a French village, Maylis might also come from the name Marie and lys, the French word for lily.

What do you think of rare May names?  Would you consider any of these names? What have I missed? 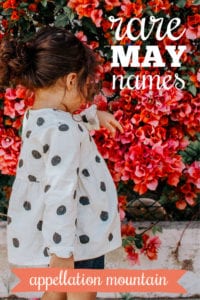 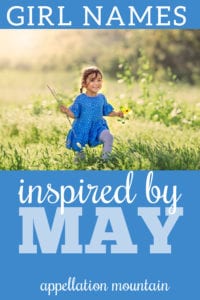 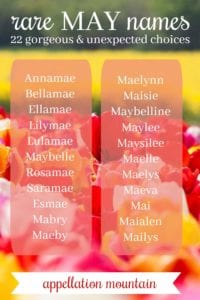