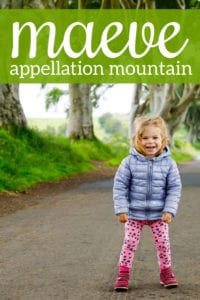 Maeve belongs to a legendary warrior queen and a ruthless Westworld character.

So many Irish girl names suffer from a case of letmespellitforyou.

But Maeve? Even if it strikes someone as new, our familiarity with Mae and Eve mean that it’s pretty obvious how to say this slim, trim name.

In Irish myth, the name belongs to a much-married warrior queen. She picked fights and won them. Find her in the Ulster Cycle, set in the first century AD, but recorded in the Middle Ages.

And make no mistake, she’s a queen, not a fairy tale princess. Maeve is depicted as fearless and bold. She ruled her kingdom with a ruthless focus on power.

This name means intoxicating. It may share roots with mead – the honey wine made as early as 7000 BC.

There’s also a legendary figure known as Mab, mentioned by Shakespeare, cousin to the warrior queen.

The name appears in medieval Ireland in various spellings.

Perhaps some were inspired by popular names in Ireland, where the name was steadily popular.

In the mid-1980s, Irish author Maeve Binchy experienced early success in the US. She’s best known for Circle of Friends, which became a 1995 movie starring Chris O’Donnell and Minnie Driver.

Then came the 1990s-era fantasy adventure series The Adventures of Sinbad. The show gave the famous sailor a Celtic sorceress sidekick named Maeve.

MOVE OVER, ERIN AND KELLY

American parents have long embraced Irish names for our sons and daughters. But by the 1990s, names like Erin, Megan, Kaitlyn, Tara, and Kelly were solidly established for girls.

It’s worth noting that an American “Irish name” isn’t necessarily what Irish parents are naming their children. Erin, for example, caught on in the US first. We think of Megan as Irish thanks to a character in 1977 bestseller turned 1983 mini-series extravaganza The Thorn Birds.

Many parents have opted for surname-style names, like Riley, Teagan, and Quinn, to celebrate their Irish roots.

But Maeve feels a little different – the rediscovery of a strong, traditional name.

And then came Maeve Millay.

HBO original series Westworld debuted in 2016. It’s based on an earlier Michael Crichton novel, but this character is new. Set in the not-too-distant-future, Westworld is an immersive theme park for adults, populated by highly sophisticated androids, known as hosts.

Millay is a host, the madam of the Mariposa Saloon’s brothel.

The story begins with Maeve and the other hosts begin to develop awareness of their identities – and then take control of their own stories.

Thandie Newton plays Millay. The first name is a fitting choice – a warrior queen in a very different setting.

No question that Westworld factored into that equation. But this is no Khaleesi. Maeve boasts a long history, authentic Irish roots, and a sharp, stylish sound sure to appeal to parents after something just a little different.

Would you consider Maeve for a daughter? 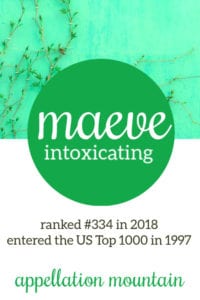