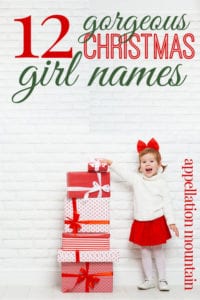 Consider it an early gift: a dozen Christmas girl names, none of them currently ranked in the US Top 500.

That’s right! You won’t find Mary or Joy on this list, even though they certainly feel rich with Christmas spirit. Unlike, say, Ivy or Winter, you might find yourself explaining why this name is just right for a baby born between Thanksgiving and the New Year.

But every option brings the festive, with ties to all things magical and hall-bedecking.

If you’re after something just a little bit different that captures the spirit of the season, start with this list!

We love a good nature name, from classics like Lily and Rose, to modern favorites like Willow and River. Amaryllis succeeds because it’s yet another flower name, and it makes the Christmas girl names list because it’s so linked to the season. The bulbs bloom indoors, making them just right for chilly Decembers in the much of the US. And they come in showy, seasonal colors, including bright red and red-and-white candy cane stripes.

Bethlehem, the city of Jesus’ birth, could make a great seasonal choice, with built-in nicknames like Beth and Bette. Belén evolved as the Spanish form of the Biblical place name, slightly contracted from the original, but still clearly linked. In English, the temptation might be to rhyme it with Helen, but this name sounds closer to bel EHN. While it’s the most popular name on this list, many English speakers may find it brand new.

While we’re globe-trotting, Cadeau is the French word for gift. Pronounce it like the ‘ca’ in cat, followed by the do in do-re-mi. That might’ve been outlandish in another age, but this is the moment of Margot and Willow, and, of course, the boy’s name Theo, which all comes from a name meaning gift. It’s the rarest choice on this list, but I think it would work. (And could make a stunning middle, too.)

The Old Testament tells of a savior who will be named Emmanuel – God is with us. The Gospel of Matthew references this story, too. Why Mary went with another name, we cannot know, but Jesus is sometimes called Emmanuel over the ages. Think of the Christmas carols, like “O Come, O Come Emmanuel.” Emmanuelle is simply the French feminine form, popular there from the 1960s into the 90s.

Glory reads like an updated twist on long-established name Gloria. But it’s a little more complicated. Strictly speaking, Gloria is the Latin – and Spanish – word for glory. So let’s just say it’s been around, in one form or another, for ages. Poet Edmund Spenser called Queen Elizabeth I Gloriana; and Old Glory is a nickname for the US flag. But Glory feels specifically religious, too, and very appropriate for this time of year.

Jovie comes from the word jovial, meaning cheerful. But it’s on this list of Christmas girl names – well, it’s on our radar at all – thanks to 2003 holiday movie Elf, starring Will Ferrell as a human raised among Santa’s helpers at the North Pole. Spoiler alert: Jovie ends up as Mrs. Elf.

Fun fact: Holly Golightly, played so famously by Audrey Hepburn in Breakfast at Tiffany’s, was actually named Holiday. In the UK, the word means vacation, but in the US, we tend to say “Happy Holidays,” a greeting that covers the whole winter season. It’s an unconventional choice, but not so different from Delaney and Everly, either. And nickname Holly? That’s quintessential Christmas.

Neve can be an Anglicized spelling of Niamh, meaning bright. It’s also the word for snow in Italian and a handful of other languages. Pronunciation varies – the Irish neev, like Eve; nay-vee in Italian; and nehv, like rev. That last one dominates in the US, thanks to Neve Campbell. It’s her mother’s (Dutch) maiden name, meaning nephew. But the ties to wintry snow earn it a place on the Christmas girl names list.

Plum pudding. Sugar Plum fairy. Visions of sugar plums. Strictly speaking, sugar plum candy didn’t always involve plums; it referred to the shape. And plum pudding contains raisins. But it’s an edible name at a moment when we’ve embraced Clementine and Olive and Sage. Plum blends a vintage, festive vibe with all the spirit of modern word names. I like the idea that plum means something especially good, too.

Take Harper, mix in a double scoop of Scarlett, and maybe you’ll find yourself at Silver. Or take Sylvia and update it to a modern, unisex-style word name. Either way, Silver seems like a possibility. I thought it would catch on back in 2008, when the rebooted 90210 introduced us to Silver. (It’s the character’s last name.) It didn’t happen, but this glittery, jingle-bell name captures the spirit of the season perfectly – and subtly, too.

We all know the wise men followed a star. Vesper can refer to many things – a god, a sparrow, a Bond girl. But most often it refers to evening prayers, or the evening star. It’s that last one that puts Vesper on the Christmas girl names list, a reference to the night sky from all those years ago. Sound-wise, it succeeds for many of the same reasons Silver works. It’s a familiar-but-rare possibility with seasonal appeal.

In the iconic holiday film, It’s a Wonderful Life, Zuzu is the youngest of the Bailey children. We assume it’s a pet name for Susan – or at least, it almost always is. But with our love for high-value Scrabble letters soaring, we sometimes see Zuzu given independently, a Z name just a little different than Zuri or Zora. The littlest bit Bailey is no bit player, either; in the movie, she’s the one who tells us ” … every time a bell rings, an angel gets his wings.” That makes the daring Zuzu just right for Christmas girl names.

Those are my choices for a dozen gorgeous Christmas girl names, all far more rare than Natalie or Noelle. What are your favorites? What would you add to this list? 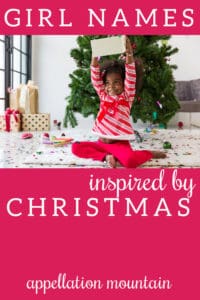 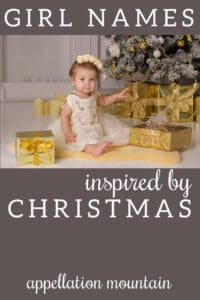 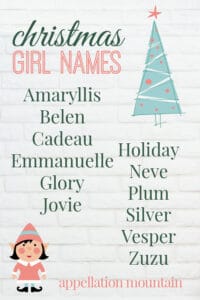