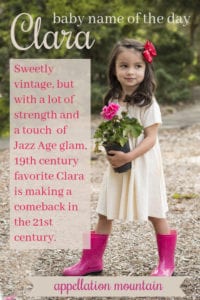 Clara sounds sweet, but this name has some backbone.

Thanks to Emmy Jo and Another for suggesting our Baby Name of the Day.

This name benefits from a great meaning. It comes from the Latin clarus, clear or bright. Various forms of Clarus have been used over the years, including Clare – as in Saint Clare of Assisi. Her renown helps explain the name’s long history of use throughout Europe.

Like Emma and Amelia, this name feels vintage and feminine. It can sound almost dainty. A nineteenth century staple, it’s easy to file this name with the charming antiques.

Except that would be a mistake.

One of the most influential bearers of the name was born Clarissa in 1821. We know her as Clara Barton.

Barton trained and worked as a teacher first, then served as a patent clerk. When the American Civil War began, she was working in Washington DC. Barton responded to a call for help with the wounded; as fate would have it, the victims she volunteered to nurse were from her hometown. She had even taught some of them.

She quickly became involved in efforts to organize medical supplies and hospitals. While we think of her as a nurse, it’s more correct to see her as a tremendously capable administrator. Following the war, she established the office to help identify missing soldiers and give them proper burials.

A few years later, she established the Red Cross. Detractors insisted that there would never be another calamity on the scale of the Civil War. She responded that there would always be disaster, and a need for an organization ready to bring relief in any circumstance.

Barton also worked with abolitionists and suffragettes. Her legacy lends this name a certain integrity and stubborn strength.

The silent film star’s story leans tragic. But she remains the iconic flapper, a glamorous figure of the Jazz Age.

Whether inspired by Barton’s good works or the shimmer of Bow’s stardom, parents continued to use this name in big numbers. It remained a Top 100 choice through 1938.

The name belongs to the same generation as current revivals like Alice and Grace, but also still dusty choices like Ethel and Bertha.

But mostly, all of the Clar- names fell into obscurity during the 1970s and 80s, including the French Claire and the frilly Clarissa.

Meanwhile, the similar-sounding, but unrelated, Cara and Kara caught on.

Somewhere along the way, the world fell in love with The Nutcracker.

Fun fact: the ballet bombed. At the very least, the original St. Petersburg production wasn’t much of a success. Changes were made for later productions in Budapest, London, and New York over the following decades.

What kept interest alive? Possibly the music, the one part of the original production that received praise from critics.

By the 1960s, it was becoming a Christmas tradition to attend a performance.

None of that could save the name, though. Incidentally, she’s Marie in the very first version of the story, by Hoffman. Masha, a Russian nickname for Marie, also occurs in some tellings. It was Alexandre Dumas’ take on E.T.A. Hoffman’s original tale that introduced Clara as the heroine. Over the years, it’s Dumas’ name that has caught on.

What explains the comeback? Maybe it’s our love for the ballet, as generations of parents grew up seeing it on stage or televised at the holidays.

Or maybe it’s just the passing of time. It’s been a solid century since Clara topped the charts. If the hundred-year rule holds, it’s time for a comeback.

It helps that other Claire names have gained, too. Claire is a Top 100 choice again today.

What might just push this name over the edge?

Mackenzie Foy stepped into her dancing slippers as Clara in Disney’s The Nutcracker and the Four Realms.

Had the movie been a smash hit, the name might have rocketed up the charts.

But even a modest showing is enough to put the name on parents’ radar.

And it makes for a quintessentially Christmas-time pick, without being as obvious as Holly or Noelle.

If you love classic, feminine name with history galore and a certain storybook appeal, Clara might belong on your shortlist.

Do you think Clara will climb higher? What’s your favorite of the Clare names?