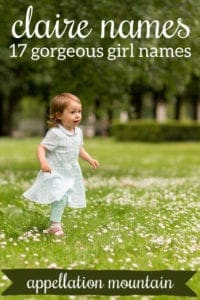 Claire names range from the classic Clara to elaborate Clarimond to modern possibilities like Clarity and Sinclair.

In my Italian family, children were traditionally named after their grandparents.  When you reached girl or boy #3, it was time to move on names from great-aunts and great-uncles.

The result?  Those big families with lots of cousins named Tony.

As it happens, we’re light on Tonys, but rich in Claire names.

Chiara Offreduccio, better known as Saint Clare of Assisi, is remembered as one of the first followers of Saint Francis. Chiara is the Italian form of Clara, which becomes Claire in French and Clare in English. Though every form of the name can be heard across the Western world.

Forms of Chiara and Clare are all over my family tree, from my mother to my daughter.

In the US, we’ve alternated between Claire and Clare. At present, Claire ranks in the Top 100, ahead of Clara and well ahead of Clare.

But what if you like the sound, but long for something a little more elaborate? Or maybe a creative spin on a traditional choice?

It turns out there are tons of Claire names, from the spare to the frilly, the modern to the antique.

Read on for all of the Clara-Claire names.

Trim, tailored, and frills-free, Claire feels steadily popular, but not overused. Today’s parents grew up with Claire Danes, and we’re still watching her in award-winning Showtimes series Homeland. Clare and Clair are options, too. All come directly from the Latin clarus – clear or bright. Though Clare can also be an Irish place name and surname, as in County Clare, and an English one, too, from the Suffolk town. And just for fun, there’s an early B-52s single, “Planet Claire.”

You might think of The Nutcracker’s Clara, or flapper extraordinaire Clara Bow. But the name dates even farther back. It’s the feminine form of Clarus, worn by several early saints. And the thirteenth century Italian saint boosted her name across Europe, in several forms – including the Latin Clara. This name became a Top Ten favorite in the late 1800s, but remains just outside of the US Top 100 now.

The Italian form of the name brings to mind a host of international options. There’s the Irish Ciara, with a completely separate origin and meaning. Kiara and company could be re-spellings of either, or just a whole new name. It’s elaborate, impeccably Italian, and probably easier to wear than, say, Elettra or Fiammetta.

Americans usually think of nicknames as shorter – Ellie for Eleanor, Lou from Lucille. But many languages elaborate names, adding syllables to create diminutive forms. Chiarina comes from Chiara plus -ina, an ending that transforms the name into “little Claire.” It’s not something you’ll hear in the US, but it has meaning for my family, so I’m listing it here. (My family turned Chairina into Clarina, though the current bearer of the name much prefers to be Clare.)

Speaking of elaborations, Clarencia probably comes from Clarence, though it seems possible that Clarencia predates the masculine form. There’s a small port in Chile called Caleta Clarencia. A medieval state known as Achaea once claimed Clarencia as its capital. Today it stands in Greece, and is known as Glarentza, but antique coins still bear the inscription “DE CLARENCIA.” Pretty obscure, I suppose, but still a lovely, beguiling sound.

Another rarity, Clarette languished even in the age of Annette. But it’s quite close to Scarlett, and -ette names are enjoying a renaissance today. So perhaps there’s a chance for this elaboration.

Clarabelle screams cow, thanks to Walt Disney. The character debuted way back in 1928, and appears just enough over the years to remind us. It’s also one of the faithful coaches in Thomas the Tank Engine – spelled Clarabel, and a clown from 1950s children’s television staple, Howdy Doody. And yet it’s a smoosh of Clare and Belle, giving this name the meaning bright and beautiful. In our age of Isabella and Annabelle, surely some spelling of this name could appeal. Clarabella, maybe?

A handful of names are cemented in our collective memory from just one scene. There’s Marlon Brando’s passionate Stella, of course. And then there’s Anthony Hopkins’ bone-chilling Clarice. Hopkins played serial killer Hannibal Lechter in the 1991 big screen adaptation of the bestselling novel; Jodie Foster was heroic FBI agent Clarice Starling. Both roles – and names – are unforgettable. But I don’t think it should doom Clarice. Back in 1964’s Rudolph the Red-Nosed Reindeer, Clarice was Rudolph’s girlfriend. And it appeared in the US Top 1000 most years into the 1960s. It’s the kind of name everyone recognizes, but no one is using. One another association: the University of Maryland’s is home to The Clarice Smith Performing Arts Center, known simply as The Clarice.

Like Claribel, this is a smoosh name. In this case, it’s the Latin clarus with the Germanic mund – bright protector, maybe? Or it could come from the Occitan Esclarmonde – light of the world, a name from medieval legend. There’s a Massenet opera by the name, too, the tale of an empress and sorceress.

Edmund Spenser, that great inventor of dramatic names, created Clarinda for his sixteenth century epic, The Faerie Queene. It has a long history of sparing use in the US, though it seems near extinction in the last decade or so.

Unlike many of the Claire names, Clarion feels unisex. It also sounds more modern than antique. It’s a musical term, in the company of Aria. Clarion originally referred to a small trumpet, again from the Latin clarus. A clarion call demands action. That makes this part-musical, part-virtue name.

Frilly, feminine Clarissa was boosted by Melissa Joan Hart’s late 1980s Nickelodeon hit, Clarissa Explains It All. But it sounds vintage, and indeed, the name was first made famous by a late eighteenth century novel – in which virtuous Clarissa suffers  mightily. Still, I think this name sounds romantic, resilient, and just a little bit different today. And if you’re a fan of popular YA series The Mortal Instruments, then this name might feel all-out heroic.

Felicity, Amity, and Verity all feel at home on Plymouth Rock. But Clarity carries a modern vibe. That’s partly because the name was virtually unheard of in the US before the 1970s. It’s also true, though, that Clarity seems like a modern virtue. It suggests clear thinking, or perhaps vision – which makes this an especially clever choice for a 2020 baby. File it with Serenity, another meaning-rich choice for a daughter today.

Nearly any of these names might shorten to Clary, but it might bring to mind the main character from The Mortal Instruments. She’s called Clary throughout the series, but her given name is the pretty Clarissa.

Klara could be a Kardashian-inspired spin on Clara. But most often, it’s simply the preferred spelling in Germany, as well as Scandinavia and many Slavic countries.

Double Claire names occur in many languages. The magazine Marie Claire makes the French version familiar, but all of these – and more – are heard across time and languages.

Looking for a tailored, unisex spin on Claire names, but not willing to go quite as far as Clarion? Sinclair means Saint Claire. It brings to mind American author Sinclair Lewis, which makes it feel masculine. But in our age of Harper, Riley, and Addison, I think this works every bit as well for a daughter.

What are your favorite Claire names?

First published on April 9, 2012, I wrote the original version for my mother, Clare. It was substantially revised and re-posted on October 3, 2014 for her namesake’s sixth birthday, and again, on April 6, 2020, this name for my mom’s birthday. 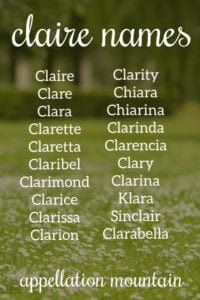 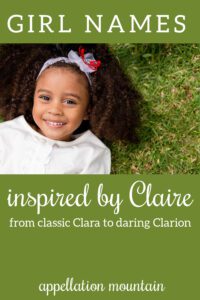