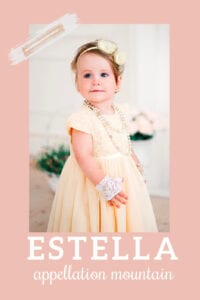 The baby name Estella fell from the night sky to the pages of a classic novel.

The baby name Estella comes from the Latin stella – star. It became Estelle in French, and picked up the extra syllable in Latin.

Stella appears in medieval Italy; Estelle and Estella surface in English over the years. By the year 1880, when US popularity data is first compiled, both names sit just beyond the US Top 100.

Along with Esther, they’re a cluster of vintage lovelies with a shared meaning. Night sky names have a long history of use, and so it’s no surprise that they’re all easy to find across the years.

Estella appears on the map, too.

One notable Estella sits in northern Spain, in Navarre. It’s situated on the Way of St. James pilgrimage route.

It played a part in Spanish history, too. In the 1200s, the royal court used it as one of their frequent bases. During nineteenth century civil conflicts over the royal succession, a military leader was named Marquess of Estella following a victory.

Today, Estella is also known as Lizarra, the Basque name for the city.

While it remains noted for its architecture, chances are that few recognize the place name outside of Spain.

Most people probably think of one fictional character when they hear the baby name Estella. She’s the ward of Miss Havisham in Charles Dickens’ 1860 novel Great Expectations.

Dickens was a prolific writer, and several of his novels remain much-read classics. But Great Expectations is right up there with A Christmas Carol for familiarity.

After all, it’s been adapted as a movie at least ten times. Gwyneth Paltrow played Estella in 1998; in 2012, it was Holliday Grainger.

With Miss Havisham’s encouragement, Estella torments Pip, the hero of the tale. He’s penniless – or so he thinks – and Estella is beautiful and meant to inherit a fortune.

The story twists and turns, and nothing is quite as it seems.

Estella fits with other characters’ names from the novel, like Havisham relatives Georgina and Camilla – and with Dickensian names in general.

But it’s not clear if the name was common in nineteenth century England.

What we know is that the baby name Estella appeared in the US Top 1000 every year through 1974.

At the turn of the twentieth century, Estelle was slightly more popular.

It fits with so many El- names and -ella ones, too. File Estella midway between Eloise and Stella, Elizabeth and Bella.

But is there anything to make the baby name Estella feel fresh and interesting to parents?

No new Great Expectations adaptation is currently on the horizon. Instead, another film is shining a spotlight.

The 2021 movie Cruella puts the name front and center.

Based on 101 Dalmations, it’s the story of Cruella de Vil – told from the villain’s perspective. We learn that her real name is Estella Miller. She’s creative but mean, earning her nickname. But just like any good re-telling, we learn that she’s not all bad – and maybe she’s even a little bit of a hero herself.

Names like Kylo have proved that parents can embrace names borrowed from characters painted in gray. The question is whether Cruella’s box office success is enough to spark more interest in the name.

It’s easy to imagine parents settling on Estella as an -ella name that’s just different enough for their daughters, particularly since it starts with the same letter E as Eloise and so many other favorites.

With a stylish sound, literary pedigree, and night sky meaning, it’s easy to imagine the baby name Estella wearing well. If you’re looking for a stunner of a name for your daughter, glamorous, vintage Estella might belong on your list.

What do you think of the baby name Estella? 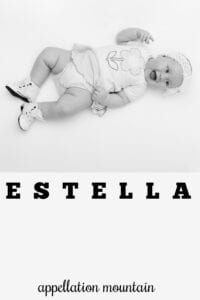