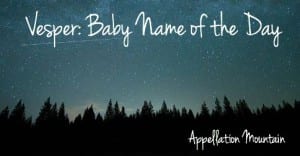 This post was originally published on December 24, 2009. It was substantially revised and re-posted on August 17, 2015.

It’s on an-trend name from the night sky and the silver screen.

Thanks to Shelby for suggesting Vesper as our Baby Name of the Day. Vesper Lynd was created by Fleming for Bond’s first adventure.  Her name is a play on West Berlin.  In Casino Royale, she’s a double agent – as divided as the city – but Vesper ultimately proves herself loyal to James.The book was adapted for the big screen for the second time in 2006, with Eva Green as the double agent.

It’s said that Fleming based Vesper on a real life spy, Poland’s Krystyna Skarbek, a woman he knew in her later years.  Resourceful Skarbek organized couriers to bring intelligence reports from Warsaw to Budapest during World War II.  She escaped the Gestapo in Hungary.  In France, she once cajoled, threatened and bribed Gestapo agents into releasing two of her male colleagues.  Her real life story is arguably more intriguing than the fictional character she inspired.

Bond girl aside, Vesper is the Latin term for the evening star, which was actually the planet Venus.

But wait, you say, the Roman god Vesper is masculine. In Greek, he’s Hespeus. In both traditions, he’s the son of the dawn, the brother of the morning star.

Should we cede Vesper to the boys?

Maybe. But there are also the Hesperides, nymphs of the sunset and the evening. The Greeks believed that they lived in a garden somewhere on the edge of the world. Sometimes there are just three; other accounts list more. Heracles visited the garden for his eleventh labor, to steal the apples they tended.

The Hesperides became popular in Renaissance art, and their garden is mentioned by everyone from Milton to Shakespeare.

Vespers – add an ‘s’ – is also known as evensong, an evening prayer service in several religious traditions. Mozart and Vivaldi are among those who have composed musical accompaniments.

Evening prayer services date back to the earliest days of the church in the ancient world. St. Benedict may have been the first to use the term, back in the sixth century. Specifics vary over the centuries and by faith tradition, but it has traditionally been one of the more important and solemn prayer services of the day.

Vesper: Rarity on the Rise 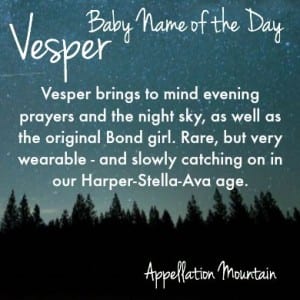 There have been a handful of newborn boys and girls given the name over the years. But Vesper’s use has recently picked up. 35 girls were given the name in 2013, and 52 in 2014 – a new high.

Overall, Vesper remains rare. But in our age of Harper, Vivienne, and Stella, it’s a wearable choice. If you’re after something that stands out and fits in, Vesper is one to consider.

What do you think of Vesper? Is this name too Bond girl, or just right for a baby?