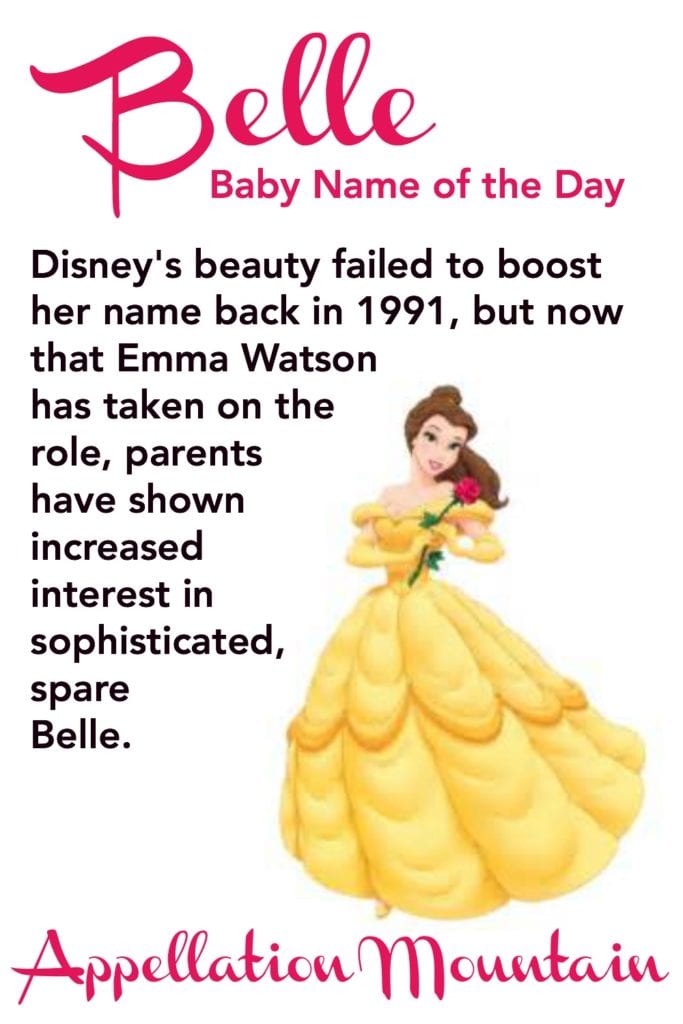 Belle recently arrived in the US Top 1000, after years of languishing behind Isabella and company.

Our review of the newest names to the US popularity list continues today.

This names comes from French, but it’s rare as a given name in France.

In Latin, bella means beautiful. It became belle in French, and traveled to English, too. You can be the Belle of the Ball, or a Southern belle. In English it refers to the most beautiful woman in the room, or a fashionable, well-mannered young woman in the South.

At the end of the nineteenth century, when the US first collected name data, Belle appeared in the Top 100. It remained a Top 1,000 choice into the 1930s.

None of the longer forms of the name ranked higher than just plain Belle during the 1880s, though the Isa- and Anna-s all appeared on the charts.

Years earlier, Arabella “Belle” Reynolds accompanied her husband to battle during the Civil War, serving heroically as a nurse. The governor of Illinois gave her the rank of Major for her efforts.

Margaret Mitchell’s 1936 Civil War novel, Gone With the Wind, gave the name to another character, Belle Watling. She’s a brothel owner in Atlanta, but is recognized for her selflessness at several points in the book and movie – sometimes in contrast to Scarlett.

The Isa-s and the Anna-s earlier share only sound and spelling. They originate in very different places.

Former number one Isabella is cousin to Elizabeth, both evolutions of the Biblical Elisheba. It means “God is my oath.”

As for Annabel and friends, they evolved from the Amabel, which comes from the Latin amabilis, lovable. It was whispered down the alley into Annabel thanks to our familiarity with all of the Ann- names. Arabella probably came from the same roots.

In recent years, forms of all of these names have been in the US Top 1,000 and even Top 100. They’ve dominated pop culture, too. (Think Twilight’s Bella Swan.)

The name also brings to mind bells, as in Liberty and Christmas. This makes it at least slightly musical and potentially seasonal, too.

For every Ariel and Jasmine, plenty of Disney princess names fail to make an impression on parents.

The 1991 animated blockbuster adaptation of Beauty and the Beast caused only a slight uptick in the name’s use. Disney first considered adapting the fairytale as far back as the 1930s. When it finally hit theaters, two years following The Little Mermaid, it succeeded both in ticket sales and critical response. Beauty became the first animated film nominated for Best Picture at the Academy Awards. The movie, complete with its book-loving, fearless, and nicely-named heroine, has continued to appeal to new generations.

During the early 1990s, Isa- names steadily climbed. Some forms returned to the US Top 1000 after long absences. Others started the long march to the top of the charts.

Belle: Back in the Spotlight

But something changed a few years ago. Maybe it’s just a question of replacing the oh-so-popular Isabella. Or maybe it’s about the second Beauty and the Beast movie. While it debuted in March 2017, buzz about the remake started far earlier.

If you love spare, elegant names for girls and appreciate the Disney connection, this name could be a powerfully pretty choice for a daughter. Even though Belle is back in the Top 1,000, it remains far less common than many an -ella/-bella name.