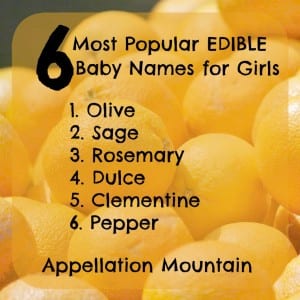 Edible baby names are all over the news.

And seldom does a list of crazy Hollywood baby names fail to exclude the equally edible Apple.

But while we’re laughing about how silly it is to name our kids things like Oreo or Fondue, we’re also quietly embracing plenty of names that would be right at home in the kitchen.

I’m not counting Reese and Ruth, or lots of other names found on candy bars. Likewise, I’ve excluded Campbell and other names associated with popular brands. Even though I’m quite confident that I could find two of the three in my own kitchen at this very moment.

Nope, these are names that are found on menus all over the US – and increasingly, on our playgrounds, too.

No question – Olive takes the crown when it comes to edible baby names.

In 2007, actors Isla Fisher and Sacha Baron Cohen chose this name for their daughter. After decades of obscurity, Olive re-entered the US Top 1000 that same year. Then came Drew Barrymore’s firstborn, also Olive, born in 2012.

It wasn’t such a stretch, since sister name Olivia was long a favorite, and Olive remains familiar thanks to cartoon characters like Popeye’s Olive Oyl, and more recently, Olive the Other Reindeer, voiced by Ms. Barrymore herself back in 2000.

Nonetheless, it would tough to argue that Olive is anything less than perfectly edible.

Next come two baby names from your spice rack: Sage and Rosemary.

Sure, Sage also refers to wisdom, making this one a modern virtue name – and a unisex one, too, often heard on boys. But Sage has been the name of an herb since the 1300s, and it’s hard to hear this one and not think of the English folksong so memorably covered by Simon and Garfunkel.

Speaking of Scarborough Fair, Rosemary is also on the rise. You might see Rosemary as a botanical name, or a smoosh of the enduring Mary and Rose.  But it originally comes from the Latin phrase dew of the sea – ros marinus. The goddess Aphrodite emerged from the sea with rosemary draped over her shoulders.  In more recent centuries, Rosemary is associated with the Virgin Mary, as well as remembrance.

All of this aside, you’ll find one on nearly any spice rack. At #533 in the US, Rosemary is also fast-rising retro name for girls.

Edible Names for Girls: How Sweet!

Dulce is the only name on this list poised to be less popular in 2015. Dulce literally means sweet in Spanish – as in the caramel-esque Central and South American favorite, dulce de leche – sweetened milk.

Edible Names for Girls: Beyond the Top 1000

Two more edible baby names belong on this list, both poised to be more popular in the coming years.

First is Clementine. Every bit as edible as Apple or Olive, with just as much star power. Actor Ethan Hawke has a Clementine. So does supermodel Claudia Schiffer.

The citrus fruit takes its name from Father Clement Rodier, who discovered the hybrid fruit growing in the garden of the orphanage he ran in Algeria. Clementine is also the French feminine form of Clement, and has history as a given name that predates the fruit by at least a century.

But with 152 girls given the name in 2013, Pepper might be poised to go mainstream – following Harper, Piper, and other ends-in-r names, as well as Penelope and other starts-with-P names – into wider use. Remember Fraise – the baby girl renamed Fraisine? Fraise is the French word for strawberry, but Fraisine is considered an elegant nineteenth century name. I’m not sure how popular it was, but I found references to women named Fraisine, as well as Marie-Fraisine, from the right era, so it must have been in use.  Still, it’s no less associated with the berry. I found this ad in the British Library collection.

Another name along these lines is Pomeline, related to the French word for apple.  And speaking of apples, there are dozens of potential names borrowed from the orchard.

Plus, 27 girls were given the name Apple in 2013, so let’s not completely discount the possibility of meeting an Apple, either.

Then there’s Plum, a name seldom heard in real life, but with interesting potential for a middle name.

On the boys’ side, leafy green Kale hogs the spotlight, charting at #825 in the US – though there are other origins for Kale besides the produce aisle.

Are there any edible baby names that you might consider?