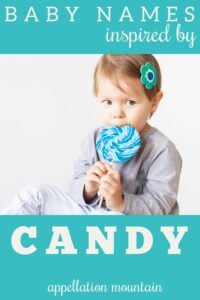 Candy baby names seem just right at certain holidays. Valentine’s Day and Halloween, of course. But plenty of these might inspire a child’s name during any season.

Of course, some obvious choices didn’t feel name-like. Sugar seemed too sweet, even though a few dozen girls have received the name since the 1950s.

And while plenty of brands make the list, most don’t. Toblerone, for one, is too much.

Does it count as a candy name if the candy is only sold in Norway?  If it is a treat few would recognize in the US?  Is a sweet meaning alone enough to make the list?

In all, there are more wearable names than you might guess.  Most lean girl, but a handful could wear well on a son, too.

If you have a sweet tooth, one of these names could be the perfect choice for a future child’s name.

A New Testament title for a queen of Nubia, Candace has nothing to do with sweet treats – save that Candace shortens naturally to Candy, and so makes this list. Some will think of Phineas and Ferb’s older sister, intent on spoiling their schemes.

As singular a name as Uma, Condoleezza Rice put her name on the map. The former secretary of state’s given name comes from the musical term con dolcezza – with sweetness. (Plus a few extra letters.)

The Latin dulcis means sweet, and it’s the source of dolcezza in Ms. Rice’s name. In various forms, Dulcie and company have been in use over the centuries. Dulcinea was Don Quixote’s true love, and, many years later, a Toad the Wet Sprocket album.

Eglantine is another name for the flowering shrub known as sweetbrier – hence the name’s inclusion on this list. While Eglantine sounds sort of Germanic, it actually comes from aiglent – the Old French translation for the plant name. You might recognize this one from Kathryn Lansky’s Guardians of Ga’Hoole series, where it is worn by a small owl.

Esti and Esty serve as short forms of Esther.  Ezti, though, literally means honey or sweet in Basque. It doesn’t seem to be used as a given name, but it seems like it would fit.

While Honey has never cracked the US Top 1000, it has a surprisingly long and steady history of use. 67 girls were given the name in 2019, 109 in 2005, and 23 in 2000. Former reality television star Honey Boo Boo – real name Alana – might explain some of the name’s use, but long before TLC existed, there was Bond girl Honey Ryder and a character on long-running BBC soap opera EastEnders.

The world lollipop has been around since the 1700s, which seems fitting for a vintage nickname-name like Lolly. It could be short for Dolores, Laura, Eulalia, Charlotte, Louise/Louisa, or any name with a strong L- sound.

In French, the word for honey is miel and miellé means honeyed. Mielle also reads like a Mia-Brielle mashup. Both have been used very occasionally in the US.

Sir Philip Sidney combined the Greek pan – all – and meli – honey for a poem in the 1500s. In 1740, Samuel Richardson gave the name to the heroine of his bestseller Pamela; or, Virtue Rewarded. His Pamela was a humble maidservant who refused the advances of her employer’s son, until he finally proposed an honorable marriage. The name caught on in the UK around 1920, and was a smash hit in the US in the 1950s.

Zusa brings to mind occasional Susan nickname Zuzu, but it’s not related. Instead, Zusa is a Yiddish name – or perhaps a term of endearment – meaning sweet.

Combine our affection for Charlie and all of his variants with an ongoing interest in place names, and the Charleston Chew could inspire a baby or three.

If you’ve been to Pittsburgh, Pennsylvania, you might’ve spotted the iconic CLARK sign. Created by Irish immigrant DL Clark, the candy bar remains in production today, though they’re now made by Boyer Candy Company. As a name, Clark feels a little retro, but mostly in a handsome, Clark Gable/Clark Kent kind of way. Sci fi series The 100 boosted Clarke-with-an-e as a girl’s name.

A great nickname for Dorothy, Dot is also a popular brand of gum drops manufactured by Tootsie Roll.

There really was a Lady Godiva, wife of Leofric, Earl of Mercia, in the 1100s. Legend says that she rode through town on horseback in some state of undress in an attempt to convince her husband to lower taxes. While chances are it’s more fiction than truth, a Belgian chocolatier made Godiva a household name, their logo inspired by the lady’s legendary ride.

Olivia de Havilland makes this a Hollywood surname name. But Haviland Thin Mints have been made for decades. Like the Clark Bar, they’ve changed owners over the years, but the name has remained in use. Haviland feels like an alternative to favorites like Hadley and Harper, too.

Another candy bar named after its creator, in this case, LS Heath. After many years as a family business, the candy is now manufactured by Hershey. A rugged nature name, Heath leans more outdoorsy than sweet, but it qualifies as both.

Henry makes this list because of the Oh Henry! bar. But this regal, storied name has so many associations besides candy baby names. Still, parents can celebrate the birth of a son named Henry with the candy bars – except Americans will now have to import them from Canada. They’re not currently manufactured or sold in the US.

There’s much debate over the origin of the Mike & Ike candy name, but the chewy Just Born confections have been a favorite since their introduction in 1942.

Strictly speaking, a Jordan almond is a dragée –  a decorative sugar-coated confection. They may date all the way back to ancient Rome, but it was an Italian candy maker who made them famous. The Pelino family still makes them today, preferring the name confetti. As for Jordan, it might have come from jardin – the French word for garden, indicating almonds that were cultivated just for use in candy-making.

It might be short for Christopher or Katherine or Christine. Kit Carson was a frontiersman. Kit Kittredge was an American Girl doll who got her own movie. And Kit Harrington starred in Game of Thrones as Jon Snow. But when it comes to candy, Kit comes from the Kit Kat, a chocolate-covered wafer. The name probably evolved from the Kit-Cat Club, an English literary and political club composed of leading figures in 1700s England.

The second half of the Kit Kat name, Kat is often short for Katherine and company. But maybe it feels more feline than chocolte-covered.

As with Henry, this classic name doesn’t necessarily bring to mind candy. But Mary Janes are a molasses and peanut butter taffy, made since 1914. The inventor, Charles Miller, named them after his aunt.

A surname name, Palmer might seem especially sweet in Sioux City, Iowa. That’s the home of Palmer Candy Company, a family-owned company dating all the way back to 1878. They’re most famous for the Twin Bing candy bar. And there’s also the RM Palmer Company, well known for chocolate rabbits and other seasonal novelties, headquartered in Reading, Pennsylvania since 1948.

What could be more appealing than a tube of pure sugar with a little bit of flavor mixed in? Pixy sticks have been around since the 1940s. Pixy – or maybe Pixie – seems more nickname than given name.

First there were the peanut butter cups. Then came the pieces, so famously enjoyed by E.T., the Extra-Terrestrial. Since then there have been Fast Break bars and Reese’s Puffs cereals, to name just two. While Reese is strongly associated with all things peanut butter and chocolate, it is also a solidly established given name for boys and girls.

As in Baby Ruth, the candy bar. It’s often said to be named after Ruth Cleveland, the daughter of former US President GroverCleveland. Except that the candy bar was first sold in 1921. That’s over two decades after Cleveland left the White House, and some years after Ruth Cleveland had passed away. So what was happening in 1921?  Well, a baseball player named George Ruth, but better known as Babe, was enjoying quite a bit of popularity. The company manufacturing the Baby Ruth was located right down the street from Wrigley Field, and they placed a prominent billboard in view of the ballpark. But the story meant the candy bar’s creator didn’t have to pay Babe Ruth royalties.

Anyone naming their baby Sky is almost certainly looking up. But the Sky Bar, with four separate fillings in four separate compartments – was a candy-coated association, too.

We’ve named our children Allison and Ellison, so why not Calisson? A traditional French candy, made from a mix of oranges and almonds, Calisson might serve as a long form of Cal like Callahan and Calvin, or as a surname name for girls.

A chocolate brand from Norway, this name is rising quickly in the US – but spelled Freya.

In the 1950s, Smarties were advertised with the tagline “Buy some for Lulu.”  Except these are chocolate Smarties, more like M&Ms than the tablets we know in the US.

Cadbury’s Sweet Marie was long made in Canada – but it’s not currently available. The treat was named for a love poem, or so the story goes.

Another candy you can’t find in the US is the Orion Bar, manufactured in Prague by a family-owned confectionary for years before being bought by Nestle.

Many smaller, regional, family-owned chocolatiers could be added to this list of candy baby names. Whittaker is one, all the way from New Zealand.

Would you ever consider a name inspired by candy?  Are there others that should be on this list? 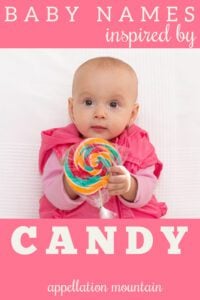