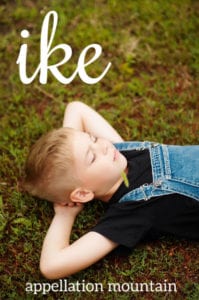 Ike might fit right in with Max and Jack.

It comes with an upbeat meaning: he will laugh.

In the Old Testament, Sarah and Abraham longed for a child, but couldn’t believe a prophecy that she would conceive. (They were not exactly spring chickens.) But it came to pass that they had a son and named him Isaac.

It’s a name that signals rejoicing.

Jewish families used this name for generations. Like many Old Testament names, it enjoyed a more widespread renaissance following the Protestant Reformation.

By the end of the seventeenth century, Sir Isaac Newton was sharing his theories in mathematics, physics, and astronomy. He’s not the only notable Isaac from the era.

Isaac has never left the US Top 1000, so it’s likely that many of those men were Ike.

As an independent given name, Ike also appeared on the US popularity charts most years through the 1940s.

Pop culture was thick with just-Ikes from the early twentieth century.

In 1940, the Just Born candy company – you might know them best for marshmallow Peeps – introduced Mike and Ikes, a fruity, chewy candy.

The name’s origins are a mystery, but here are a few theories:

Some theories connect the candy to the 34th President of the United States, Dwight D. Eisenhower. But the politician comes after the confection.

The future leader grew up in Abilene, Kansas, where he shared his nickname with his brothers. It came from the first syllable of their surname. Dwight was the only Eisenhower to answer to Ike as an adult.

He graduated from West Point, served in the first world war, and achieved the rank of General during World War II. Eisenhower continued to serve in a range of Army positions following the war, including with NATO. In 1952, he resigned his positions to run for president.

His campaign used the slogan “I like Ike.” Eisenhower went on to serve two terms, leaving office in 1961.

The name is now permanently associated with the former president, but that’s not necessarily a bad thing.

Ike Turner’s career started in the 1950s, but he became a star when he met and married Ann Bullock and re-named her Tina. While his career faltered, hers would soar after the couple’s split.

Nevertheless, a boundary-breaking musician is a very different image than a military officer-turned- president.

Just as Turner wasn’t an Isaac, lots of other names can shorten to Ike.  A fair number of them come from the West African language Igbo. They’re names like Ikenna, or even longer.

Any name with the correct first syllable works, too. The Basque Iker or Arabic Ikram are just two examples.

Ike sounds strong, but humble. It’s a little bit throwback and old-fashioned. The former president takes it in a Kansas farm boy direction, but the musicians take it in an edgier direction.

And while Isaac is near the top of the popularity charts, just 69 boys were named Ike in 2018, putting it far outside of the most common boy names.

So if you love Leo and Max, but fret that they’re far too common for you to consider, this name might belong on your short list.

Would you use just Ike? Or would you prefer it as a nickname for a longer name? 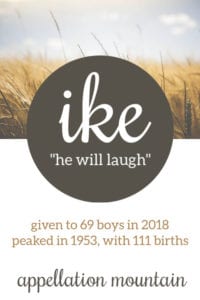