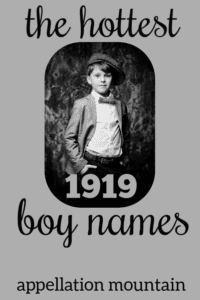 Yes, you read that right. Sure, we all know the news about the new most popular baby names. But what would I have been blogging about a century ago?

These are the fast-rising names of another era, but they’re surprisingly at home in our modern world. I skipped over Orvil and Vergie – though they might be wildly cool – in favor of names that I can imagine hearing on a three month old – or even a third-grader – today.

Most of these remain rare by 2019 standards, but a handful of these blasts from the past have made it into the mainstream over the last century or so.

Cary Grant was born Archibald Leach. He traded his ever-so-British birth name for this smoothly Hollywood choice, and became the very definition of a leading man. Years later, we’ve named our sons Gary and Cory, but Cary has drifted into the girls’ column. That’s too bad, though. It has the same appealing qualities as other Irish picks, like Aidan, Rory, and Riley. Back in 1919, it leapt over 50 spots in the US popularity ranks – though it would peak in the 1940s and 50s, after Grant’s rise to fame.

I’ve yet to write about Cary but check back and I’ll update when I do.

A surname name that feels upbeat, Irish, and tough. For the toughness, credit legendary heavyweight boxer Jack Dempsey, a record-setting 1920s prizefighter. The name peaked in use around the time Dempsey’s career was at its heights. Today it’s still used in small numbers, for boys and girls, and it sounds right at home with Wesley and Riley – but with a more powerful punch.

I’ve yet to write about Dempsey, but check back and I’ll update when I do.

Dexter screams offbeat. Or maybe British. But I also think it counts as quirky-cool, with edgy nickname Dex built in. It’s the best of Jax and Alvin, in one name. It rose in use sharply from 1918 to 1919, and today, Dexter feels vintage – but it’s tough to peg it to a particular era. Instead, Dexter feels old-school and cool, a more daring alternative to Oliver and Henry.

Years before the one-named “Mellow Yellow” singer struck it big, the Irish surname Donovan caught on in the US. I can’t say why – could it have been the Royal Navy Ship HMS Donovan? (It seems unlikely.) Maybe a politician? In any case, Donovan qualifies as a vintage favorite from a century past, one of several of the hottest 1919 boy names that feels right at home today.

I’ve yet to write about Donovan, but check back and I’ll update when I do.

If I told you this was a new Kardashian baby, you’d shrug. It’s the sort of epic, braggadocious choice we associate with 21st century celebrities. But way back in 1919, it was catching on, too. It’s a place name, surname, and sometimes a given name. It’s such a common word that it’s tough to pin down any single reason it rose in use circa 1919 – though it’s worth noting that it jumped for boys and girls. That makes it feel even more modern!

I’ve yet to write about Golden, but check back and I’ll update when I do.

I’d call this one of the most overlooked names of 2019, so imagine my surprise to find it rising a century ago. It’s a surname name with a great meaning – courageous – and plenty of familiar uses. Young detectives The Hardy Boys come to mind; so do a handful of places. I like it as a nickname for Richard, or maybe an update the to the more traditional choice. With names like Hendrix and Harley trending in 2019, this 1919 choice could fit right in. Instead, it last appeared in the US Top 1000 way back in the 1960s.

I’ve yet to write about Hardy, but check back and I’ll update when I do.

As short and strong as Jack, as bright and likeable as Mike, you might hear Ike on a child today – but it’s probably an affectionate short form of Isaac. Despite the the 34th president of the United States, Dwight D. Eisenhower, who used his childhood nickname as part of a campaign slogan. But that wasn’t for years to come. Way back in 1919, Ike had leapt over fifty spots on the popularity list – though it wouldn’t last. These days, Ike remains well outside of the rankings – which could make a perfect choice for parents after an alternative to Max.

I’ve yet to write about Ike, but check back and I’ll update when I do.

Jeremiah shares the playgrounds of 2019 with Sebastian and Alexander. But back in 1919, this long and elaborate Biblical boy name had gained over fifty places in the rankings – though it still remained in the 500s, compared to the name’s perpetual Top 100 status today. Isaiah and Josiah fared well among the hottest 1919 boy names, too, so perhaps it was simply a sound that parents embraced – at least in a small way – a century ago, presaging today’s love of all things -iah.

I’ve yet to write about Jeremiah, but check back and I’ll update when I do.

Like Carter, Miller belongs with the working names, choices that bring to mind a trade lost to the sands of time. It’s humble, reliable, strong. Maybe Miller suffers in 2019 because parents fear that it will be associated with the famous beer. Milwaukee’s Miller Brewing Company was founded all the way back in 1885 by German immigrant Frederick Miller. Does that explain Miller’s rise in the era? After all, 1919 was the beginning of Prohibition.

I’ve yet to write about Miller, but check back and I’ll update when I do.

A handful of the hottest 1919 baby names rank in the current Top 100. Wyatt has ranked in the US Top 100 since 2004. That means it’s far more popular today than it was back in 1919 – even though it spiked in use then. The reason escapes me. I guessed it might tie to a story about legendary lawman Wyatt Earp, but maybe not – Earp was still alive in 1919, and few stories about him appeared during his lifetime. Another similar choice white hot in 1919 and today? Weston.

What are your favorite 1919 boy names? Do any of these surprise you? 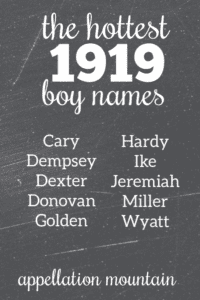