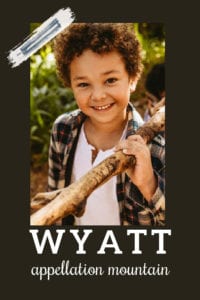 The baby name Wyatt galloped up the popularity charts in the late 1990s to become a Top 100 staple in recent years.

Thanks to Lauren for suggesting our Baby Name of the Day.

The baby name Wyatt started out as a Germanic given name that you’ve almost certainly never heard before.

Wig- names were big. It means battle, and it persists in some vaguely familiar choices, like Hedwig.

It became Wyot in English, and appeared as a first name and a given name. It also served – at least occasionally – as a nickname for William or Guy. If that’s confusing, remember that the Normans brought the French Guillaume to England, so G and W swapped at least a few times.

In the fifteenth century, Henry Wyatt supported the claims of Henry VII to the throne of England. He rose to a position as one of the king’s most trusted advisors, and later served as guardian of a young Henry VIII.

Fast-forward to 1554, and Henry’s grandson, Thomas the Younger, led Wyatt’s Rebellion. Thomas Wyatt and other like-minded nobles objected to Queen Mary I’s plans to marry Philip of Spain. Their reasons mixed religious and political considerations. The rebellion failed, and Thomas was executed as a traitor.

But the family remained influential, and Thomas the Younger’s grandson, Sir Francis Wyatt, served as royal governor of the Virginia colony beginning in 1621. Wyatt descendants have been in the US ever since.

Hands down, the most famous bearer of the name was Wyatt Berry Stapp Earp, best remembered as a lawman in the Wild West. Earp famously took place in the gunfight at the OK Corral in Tombstone, Arizona.

So where did the real-life Earp get his name?  His father, Nicholas Earp, had served in the Mexican-American War under Captain Wyatt Berry Stapp. Stapp was named for his father.

When Earp was born in 1848, the name would’ve been rare as a first, but likely more familiar as a surname.

While we remember Earp as a lawman, his biography is more complex. He left Illinois to seek his fortune in the West, like so many other young men. Earp worked – and gambled. He landed on the wrong side of the law at least once, for stealing a horse, and operated a brothel. But eventually, Earp became an officer of the law, first in Kansas and then, fatefully, in Arizona.

Earp survived the gunfight, and emerged as a symbol of civilization imposed on the outlaws of the West. Along with Doc Holliday, he hunted down many of their adversaries who survived the OK Corral gunfight.

Back in the 1950s, during the age of hit television Westerns like Gunsmoke, ABC introduced The Life and Legend of Wyatt Earp.

The name faded in use as the series left the air, but it never disappeared entirely.

That was the year Kurt Russell played Wyatt Earp in Tombstone.

It was the rebirth of the Western in Hollywood. Young Guns had been a smash hit in 1988, and nearly every A-lister made a Western of some sort in the era. Think of Tom Cruise in Far and Away or Billy Crystal’s City Slickers.

Both Kurt Russell and Kevin Costner used the name for their sons. Russell welcomed son Wyatt in 1986; Costner’s son Caden Wyatt was born in 2007.

The baby name Wyatt cooled off just slightly post-Hollywood craze. But by 2004, Wyatt entered the US Top 100 at #90.

In the fifth season of smash hit series Charmed, we meet Wyatt Haliwell, a super-powerful witch. Fictional characters wore the name in everything from Paranormal Activity to The Bold and the Beautiful.

It became a modern staple, perceived as traditional. (Because Earp!) But really, the baby name Wyatt is very much a late twentieth century phenomenon.

With names like Everett, Beckett, and Elliot in favor, Wyatt fits right in. It’s a little bit rugged, but with a certain amount of polish, too.

If you like your boy names with a modern feel and a bit of history, at home in cowboy boots or wingtips, the baby name Wyatt might be just right for your child.

What do you think of the baby name Wyatt? 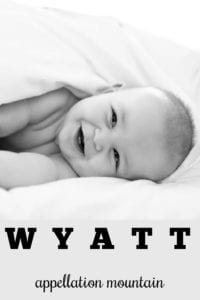