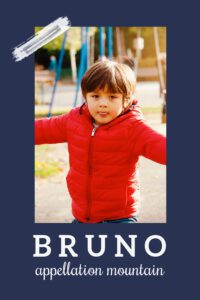 The baby name Bruno melds a tough guy sensibility with a surprising amount of polish.

Thanks to Lola for suggesting our Baby Name of the Day

TRADITIONAL with an EDGE

Looking for a name that’s rich with history but still feels edgy and cool? Here’s one that fits the bill.

The baby name Bruno simply means brown – think brun in French. The name might have been given to someone with brown hair, or some other association with the color. Or possibly it’s a surname from a place with the name, of which there are several.

Bruno has been in use for centuries. A Duke of Saxony wore it in the 800s.

During the 900s, Archbishop Bruno of Cologne was among the most powerful men in Germany. At least three saints answered to the name over the next two hundred years or so. Bruno was the given name of both Pope Gregory V and Pope Saint Leo IX.

In recent decades, the name took on a tough guy vibe.

One possible reason: Angelo Bruno, the mastermind of organized crime in Philadelphia during the 1960s and 70s. While there was a minimum of violence on his watch – he was nicknamed “The Gentle Don” – it still frames how we hear the name. Bruno’s 1980 murder sparked a wave of mob violence that grabbed headlines, and the crime boss has been portrayed in movies in recent years, including 2019’s The Irishman.

There’s also pro wrestler Bruno Sammartino. (Yes, that’s his real name!) The World Wrestling Hall-of-Famer was one of the most popular wrestlers from the 1960s into the 1980s.

But plenty of uses lend the baby name Bruno a different energy.

Brown University’s mascot is a bear by the name.

Comedian Sacha Baron Cohen’s character Bruno inspired a full-length film, but the character has since been retired.

On the one hand, it points to the name’s long and steady history. But it also feels like a random, even eclectic collection of references.

But the baby name Bruno’s starts to shift in the early 2000s.

As for Mars? The singer adopted the second half of his stage name himself.

The singer’s big break came in 2009, when he sang the vocals on rapper B.o.B.’s hit “Nothin’ On You.” A few months later, he sang on Travie McCoy’s “Billionaire” and released his debut album.

It’s been hit after hit ever since.

Mars has become one of the best-selling artists of all time, collecting eleven Grammy Awards and too many other accolades and honors to list.

It’s the kind of meteoric rise than can really boost a baby name – and completely reshape its image.

That suggests the singer hasn’t been enough to make the name feel fresh for a new generation.

But Mars did something for the baby name Bruno, beside the modest bump in use.

The name’s image shifted dramatically. It went from a sometimes-heard Italian name, mostly associated with gangsters, to a pan-global, romance language possibility. Smooth, creative, and cool.

It opened the door to two new Brunos:

The baby name Bruno reached as high as #270 way back in the 1910s – a century ago. If the pattern holds, that could make Bruno feel fresh and interesting right about now.

It fits in nicely with boy names ending with -o, as well as romance language favorites like the fast-rising Luca.

If you’re after a name that’s familiar, but not common, colorful and creative, but still strong, then the baby name Bruno could be exactly right for you.

What do you think of the baby name Bruno? 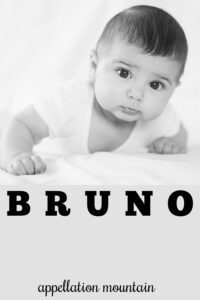