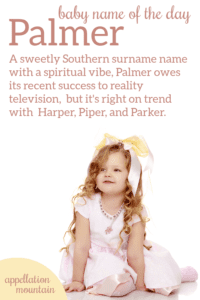 Palmer is poised to follow Piper and Harper up the popularity charts.

Palmer sounds like an occupational surname, a cousin to Carter and Hunter. But that’s not quite the case.

The name referred to one who had been on pilgrimage. Back in the Middle Ages, some made the arduous trek from Europe to the Holy Land. Their souvenir of choice? A palm branch, readily obtained there, but not grown in, say, England or France.

Of course, false souvenirs existed, even centuries before Instagram. So you might also earn the surname through chicanery – by peddling such items, or, if you were a cleric, by selling indulgences.

A handful of other origins exist, like Saint Palmatius, a third century martyr.

But we tend to think of this one in connection with palm branches. In Romeo and Juliet, Juliet tells her suitor that “palm to palm is holy palmers’ kiss,” another reference using the word as a substitute for pilgrim.

It’s more meaning that many an occupational-style surname often carries.

Despite the extra layer of story, the name remained in sparing use, and mostly for boys. It appeared in the boys’ US Top 1000 most years from 1880 in 1949, but then faded. And a steady drip of girls received the name, too, suggesting it was mostly a family name promoted to given name status.

Up until recently, it had almost fallen out of use entirely.

When it was use, the name tended to convey a certain status. Think of the All My Children’s Palmer Cortlandt, a central figure in the soap opera from the late 1970s into the early 2000s. He was a villain, but a dashing one.

In 1985 novel turned 1997 film Contact, the name belonged to a spiritual leader who teamed up with a scientist as humanity encounters extraterrestrial life for the first time. Again, he’s a he. Matthew McConaughey answered to Palmer Joss in the film.

Just Go With It

All of this made Palmer a preppy, buttoned-down choice that seemed limited to boys with the name on their family tree – and families included to choose such names.

But that changed slowly. An oh-so-famous Laura, of Twin Peaks infamy, answered to the surname beginning in 1990. The mystery of the homecoming queen’s untimely demise created a pop culture sensation.

The name didn’t budge, though.

Instead, there’s a jump in 2011. That’s the year Brooklyn Decker played Palmer Dodge in the romantic comedy Just Go With It. It’s not exactly a cinematic masterpiece, but plenty of future parents saw it. Piper and Harper were rising into the Top 100 at that same moment, and so there’s an uptick in girls named Palmer, too.

In 2014, Bravo gave us yet another addictive reality series: Southern Charm. The show profiles seven socialites living in Charleston, South Carolina. Cameran Eubanks has been part of the cast since day one. Since the series began, Cameran married local doctor Jason Wimberley, and, in late 2017, the pair welcomed daughter Palmer.

We’ve watched her baby shower on Bravo; we’ve seen a tour of her nursery. No surprise that, in 2018, the name nearly doubled in use – enough to push it into the Top 1000.

Palmer: All Girl or Unisex?

At the moment, this name is riding the coattails of Piper and company, following former favorites like Taylor and new possibilities like Parker and Sawyer.

But despite the momentum behind Palmer for girls, don’t count it out for boys. There’s too much history to this surname name to assume that it wouldn’t wear every bit as well for a son today, too.

What do you think of Palmer? Do you like it better for a boy or a girl? 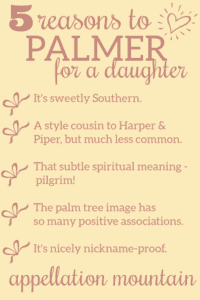