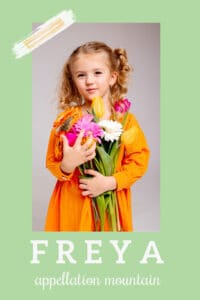 The baby name Freya is borrowed from Norse mythology, but it’s right at home on a modern girl.

Thanks to Mariuccia for suggesting our Baby Name of the Day.

THE FAIREST OF THEM ALL

Who’s the fairest of them all?

In Norse mythology, Freya is the name of the Norse goddess of love, as well as fertility.

She’s the Norse equivalent of the Greek Aphrodite or Roman Venus, goddesses of beauty.

But Norse mythology isn’t as well known as Roman or Greek. Maybe that’s because Renaissance art tended to fall back on images like Botticelli’s The Birth of Venus. Regardless, Freya remains slightly more obscure, if no less ethereal.

Her name literally translates to “Lady.”

That makes her the equivalent – or perhaps simply a slight variation of – the Germanic goddess Frigg. The Germanic title frau probably shares the same roots.

The Old Norse spelling is Freyja, and you’ll usually find the “j” version of the name used in mythology.

Freyja’s twin is Freyr and they’re usually interpreted as lord and lady – among the most important of the gods.

The name for day of the week Friday is traced back to these figures.

Most of her stories are known through collections of minstrel poems dating to the 1000s, and some even earlier. While she’s always described as beautiful, in many tales, she’s also a bloodthirsty warrior goddess, possibly lending Freya a bit more edge than her Greek and Roman equivalents.

She’s also a snappy dresser. Her gold and amber necklace – the Brísingamen – is so famous it earned a mention in Beowulf. She also sports a falcon-feather cloak and sometimes is depicted traveling in an ornate chariot pulled by a pair of skogkatter – bushy tailed cats native to the forests of Scandinavia.

PRONUNCIATION of the NAME FREYA

While there’s some variation across countries and languages, the pronunciation is typically FRAY uh.

The name shares the same long A sound of current favorites like Ava and Layla.

There’s a botanical link to Freya. In Scandinavia, milkwort was traditionally known as Freyja’s hair.

Once Christianity gained hold, references to the goddess were considered taboo, and instead the plant’s name was changed to honor the Virgin Mary.

FREYA of the SEVEN ISLES

The Joseph Conrad novel, Freya of the Seven Isles, was written in 1911.

Conrad did, indeed, travel the world and sail through the Indian Ocean himself.

This story is about the daughter of a Danish sailor, now settled on a remote island. She has more than one suitor vying for her hand, but Jasper is her beloved, and they make plans to elope.

Tragedy follows, and no one lives happily ever after.

Polish by birth, he lived in France as a young man before ultimately becoming a British citizen in 1886. He served in both the French and British merchant marines.

In the US, at least, the story failed to encourage parents to embrace the baby name Freya. Or perhaps Freya of the Seven Isles was too obscure for American parents to discover the name.

In fact, the name of the goddess wasn’t especially common in Scandinavia until the twentieth century. Freja and Freyja are older, and found earlier – but compared to Scandinavian names like Ingrid and Astrid, Freya feels like a relative newcomer.

Instead, English parents might have been the first to embrace Freya, especially in this spelling.

Let’s talk about the Viking Revival.

It turns out that the Victorians quite liked the Vikings. Historians discovered Norse history in England at just the right time; it helped recast the idea of the noble Viking as a bold adventurer. It must have appealed to a people building an empire at their own.

But it wasn’t unique to the British. German composer Richard Wagner’s Ring cycle was written between the 1840s and 1870s, with images of Valkyries and such.

Meanwhile in England, popular stories like RM Ballantyne’s Erling the Bold became favorites among schoolboys. It was theorized that Queen Victoria herself was descended from Viking rulers.

So the door opened to Freya – and other names of Scandinavian origin – just a bit.

The name gained in use slowly during the twentieth century. A BBC production in 1963 introduced Freya of the Seven Isles to a new generation.

Born in 1893 in Paris, British writer and explorer Freya Stark went on to live an astonishing life. Her English father, an English painter, spent years in Italy, taking Freya with him.

Ever since she read One Thousand and One Nights as a girl, Stark was fascinated by the East. She served in an ambulance unit during the first World War, studied Arabic and Persian at the University of London, and eventually, set off traveling.

Freya sailed for Beirut, visited Lebanon, rode a donkey to Baghdad. Her travels in French-controlled Syria were technically illegal, and she was arrested as a spy, though released after a few days. She’d become one of the first non-Arabs to travel through the Arabian desert in modern times, and visited parts of Iran that no westerner had previously seen. She’d later sail the Red Sea to Aden, intent on following an old trade route.

Instead, she fell ill and ended up home.

But her writings from her many trips endured, published in the 1930s and 40s to eager audiences.

During the second World War, she worked for the British government, first in Yemen, and then in Cairo. Her task was to help keep Egypt neutral during the conflict.

In addition to her writings, she was an accomplished photographer.

More famous people with the name have followed:

No surprise, then, that Freya caught on for baby girl names in the UK first.

Variations of the name Freya, like Freja and Freyja, are gaining in use, too. Freyja currently ranks #709.

As for Freja, it’s a Top Ten name in Denmark, and popular in Sweden, too.

The goddess Freya isn’t exactly a household name in the US, but that’s a good thing. It makes this brief, stylish, and strong choice far easier to wear.

If you’re looking for a name both strong and lovely, with a great meaning, and possibly one to honor Scandinavian heritage, Freya – or Freyja or even Freja – has potential.

What do you think of the baby name Freya? 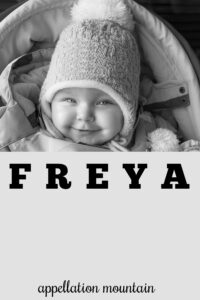 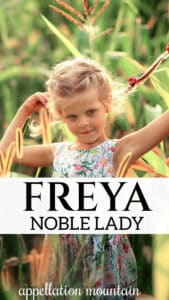