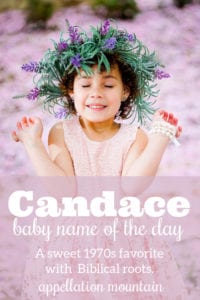 Candace combines the regal and the sweet, for a name that peaked in the 1980s – but still feels like a standout.

Thanks to Amelia for suggesting our Baby Name of the Day.

In the New Testament, we learn that queens of Ethiopia answered to a specific title: Candace. It comes from the Cushitic language family, the parent of languages like Somali and Gawwada and others that are new to me.

It’s also spelled kandake, and we first hear of it in the Kingdom of Kush. Women could rule independently, and archeological evidence suggests the first one did way back in the second century BCE.

It all lends a certain fierceness to Candace.

FROM TITLE TO NAME

This probably migrated from title to name during the Protestant Reformation, that era of creative choices meant to free parents from the limits of selecting saints’ names.

And we do find the name in sparing use by the nineteenth century in the US, with figures like pioneering interior designer Candace Wheeler appearing in the history books.

But it remained quite rare until Hollywood came along.

In 1942, Hollywood leading man William Holden filmed one last movie before joining the Air Force. It’s a romantic comedy, with Holden playing hard-working everyman Mike. He falls for Candy, the pampered daughter of a wealthy man. The couple marries; all sorts of screwball misadventures and serious problems follow. But all ends happily ever after.

Candy – full name Candace – was played by Frances Dee. The movie must have been at least a modest success, because it launched the character name.

Of course, those were the years leading up to the Baby Boom. Many more parents were choosing more names than had been the case a decade earlier.

The logical nickname, of course, is Candy. From the 1940s through the 80s, it ranked in the US Top 1000 as an independent name, peaking in the 1970s. That puts Candy in the company of Brandy, Misty, and Mandy.

The word for a sweet comes from an Arabic word meaning sugar. So it’s a term of endearment, a cutesy-cute kind of choice that feels at odds with the Biblical, regal original.

Or maybe it adds just enough contrast to make a serious name appealing for a child.

In William Faulkner’s The Sound and the Fury, there’s a character who answers to Caddy instead.

You’re not likely to meet a baby by either name today. Just 63 girls were named Candace in 2018, along with 63 called just Candy. Alternate spellings abound; in fact, Candice – with 71 births – was actually slightly more popular.

But everyone recognizes the name, thanks to:

My guess is that Candy gives parents pause. But it needn’t be a dealbreaker. If you like the regal and Biblical aspects of the name, I think Candace almost fits in the same category as Winifred and Harriet. It’s not as vintage, no – but it’s another traditional choice overlooked by parents today.

That might make this name a great opportunity for the right family.

Do you find Candace fresh, dated, or somewhere in between?