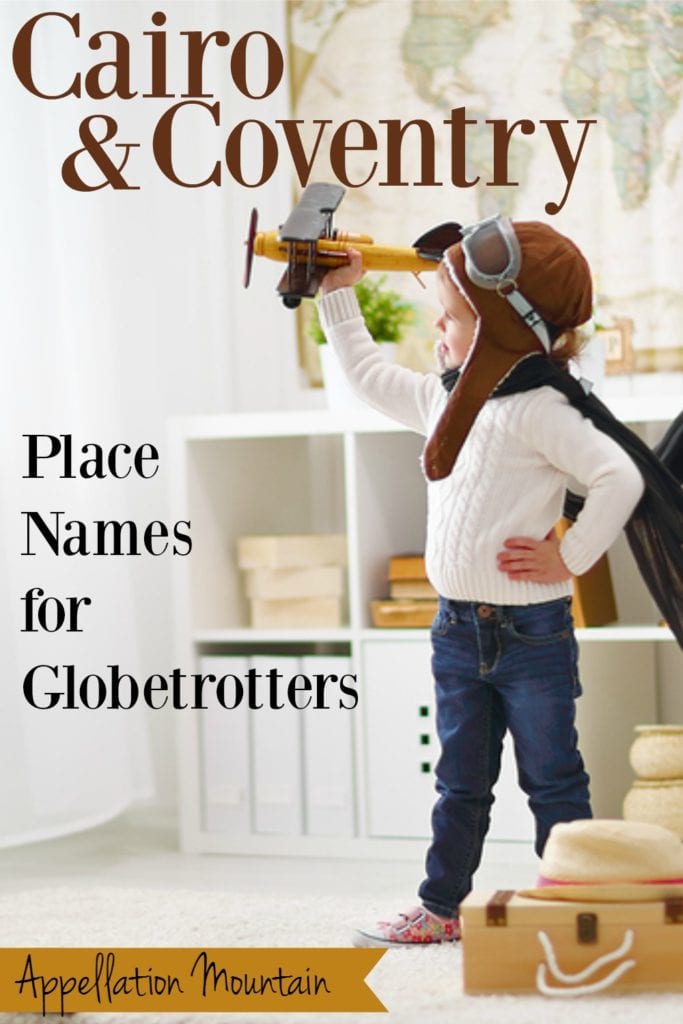 Kids are called London and Paris and Savannah, too.  What other place names could be borrowed for a birth certificate?

It’s a staggeringly long list.  And it isn’t an easy one to parse.  Plenty of places were named after people.  While some place names sound familiar, and are easily adapted for given names, others … not so much.  Can you imagine naming a child Karachi?  Muncie?  Sheboygan?  The capital of Turkmeinstan is Ashgabat.  Regardless of your heritage or travel history, that’s not something you’re likely to embrace for a baby.

Other factors to keep in mind:

Despite all of these issues, it is a rich category, with too many possibilities to include in one list.  I’ve stuck to cities for today’s post, but there’s no shortage of other options.

Read on for a selection of place names that might be very wearable for your little globetrotter.

Alexandria – Though with so many children wearing an Alex- name, this one feels a little bit ordinary.

Cairo – The storied Egyptian city seems like a logical ends-with-o name for a boy.

Dessie – It’s an Ethiopian place name, but she sounds like a retro pick, one of Sadie’s sisters.

Kanye – It’s a place name in Botswana, but most would assume you were a fan of Kanye West.

Kinshasa – I love the sound of this city name in the Congo.  It’s nickname is Kin la belle.

Nyala – Once the capital of the Daju Empire, this Sudanese city has suffered from a host of problems.  And yet, with names like Nahla, Nyla, and Naylee in the news, Nyala feels wearable.

Zaria – She’s a Slavic goddess of beauty, and a Nigerian place name, too.

Adana – This Turkish city has had many names over the ages, and plenty of stories to explain them all.  Adana seems like a natural choice for a daughter in 2013.

Amara – Already in use as a given name, it is found on the map attached to an Iraqi village.  The name’s origins are generally considered Igbo, spoken in Nigerian.  She’s a pan-international possibility.

Damascus – This one reminds me of Biblical appellation Damaris.  Despite the lack of easy nicknames, this city’s history make me think that it might work as a first name.

Fuji – You’ve probably heard of Mount Fuji and the Fuji River, too.  They’re both near a city called Fuji.  How would this wear on a child?  If we can have boys called Everest, why not?

Jericho – With ancient roots and a modern sound, this one could work well.

Jerusalem – Could this one be too weighty for a child to wear?  Maybe, but it has seen some use – for girls and boys – in the last decade or so.

Kobe – My first thought is basketball star Kobe Bryant, but it is also a Japanese city.

Sakura – The Japanese word for the cherry blossom, Sakura is also a place name and a given name in Japan.

Samarinda – This place in Borneo has a fascinating meaning.  Because the houses were once built to the same height, the settlement became known as Samarinda, “equal in height.”  And so Samarinda implies a certain equality and lack of hierarchy.

Sari – It could be a nickname for Sarah or Serena, or a traditional Indian garment.  But Sari is also an Iranian town.

Taipei – The name that inspired this post!  The capital of Taiwan, I spotted a local athlete named Taipei … and have been curious ever since.

Tokyo – You wouldn’t name a child New York or Los Angeles, but maybe this metropolis would work.

Xian – It looks like Ian with an X, and you’d probably hear Zian.  But Xi’an is one of the four ancient capitals of China, and the x is properly pronounced with a sh sound.

Adelaide – There are lots of place name possibilities in Australia, but many of them are borrowed from elsewhere, or attached to a beach or other non-urban setting.  Even Adelaide doesn’t quite count, as the city was named after an English queen.

Avila – A Spanish village, complete with medieval walls, Avila makes this list for two reasons: first, Ava has made any Av- name feel possible.  Second, Saint Teresa of Avila makes this one meaningful.

Berlin – Jeremy Renner chose this for his daughter’s middle name, but the bearish Berlin could wear well for a boy, too.

Bilbao – The heart of Basque country in Spain, Bilbao is home to a Guggenheim museum, giving it an edgy, artistic vibe.  But even with our affection for ends-with-o names, this might be over the top.

Bordeaux – A French city, but it might be too closely associated with the wine for wear.

Bristol – The Palin family put this one on the map.

Catania – An Italian place name, and maybe an unexpected way to get to Cate.

Chester – He’s a jazzy possibility, a Top 100 choice in the US through the 1920s.  With easy nickname Chet, and that -er ending, could this former Roman fort town make a comeback?

Coventry – Another English place name with history to spare.

Dover – With white cliffs and a connection to France, Dover is memorable.

Dresden – The city was decimated by bombing during World War II, but as history fades, Dresden has attracted some attention.

Dublin – Irish names are all the rage.  Why not the capital?

Florence – As a name it has separate roots, but brings to mind the enduring Italian city.

Geneva – Once relatively common in the US, and perhaps due for a revival thanks to the success of the sound-alike Genevieve.

Genoa – Another one that fits with the Genevieve trend.

Lille – Take Lily, mix in our affection for French names and geography, and you’ll arrive at Lille.  Lille comes from l’isle – the island – as the original settlement was on dry land in the middle of a marsh.

Milan – Mike Tyson gave the name to a daughter.  Shakira used it for her son.

Odessa – This Ukrainian city and seaport sounds just like a girl’s name.

Paris – If not for Ms. Hilton, Paris would be popular for children right now.  But the celebutante gives us pause.  And she definitely makes us hesitate before considering Paris for a son, even though the mythological figure is nearly as well known as the city of lights.

Pristina – We would rhyme Kosovo’s capital city with Christina, but the actual sound is slightly different in Serbian.  The s takes on a sh sound.

Ravenna – An Italian place name every bit as wearable as Florence.

Rome – A place possibility for a boy.

Samara – Located on the Volga and Samara rivers, this Russian city isn’t terribly well known.  But the sound is perfect for an unexpected girls’ name.

Toulouse – Is this a non-starter?  In English, Toulouse sounds like, well, to lose.  Not auspicious.  But then there’s that cute kitten in The Aristocats.  And Toulouse-Lautrec, first name Henri.  So … maybe in the middle spot.

Valletta – It’s the capital of Malta, a city named for Jean Parisot de la Vallette, Grand Master of the Order of Malta.  Vallette successfully defended Malta from an Ottoman invasion in the sixteenth century.  It also brings to mind model-actress Amber Valletta.

Verona – The hometown of star-crossed lovers Romeo and Juliet.

Vienna – A tempting sound, though the tendency to think of sausages might put some parents off.

Warwick – A small town on the River Avon, and another English place name with rich history.

North America, South America, and the Caribbean are up next Friday!  Would you use a place name for a child?  Which one?  And are there any destinations I’ve left off this list?  What would you add?