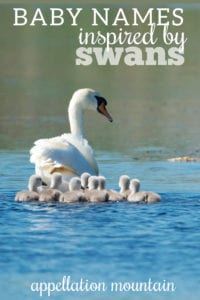 While bird baby names are quite stylish, swans are often overlooked as a source of inspiration.

We’ve embraced it as a fictional surname. There’s Bella Swan of the Twilight series and swashbuckling Elizabeth Swann of Pirates of the Caribbean.

People with the given name Swan? They’re rare. Though it makes a great, daring middle.

But swan-inspired baby names are plentiful. Read on for ten of the more interesting possibilities.

Swans were sacred to the Greek god. One of the lesser-known tales about Apollo is that he rode on the back of a swan to winter in a slice of paradise known as Hyperborea.

Better yet, Apollo is a very wearable name, not so different from other o-ending choices for boys and mythological favorites, too.

Cobham is a surname name, derived from the word cob – a male swan. (A cob is also a smallish horse or a super-sized pony.)

It’s unexpected and seldom heard – in fact, it’s never been given to even five children in a single year. And yet, it brings to mind similar C names, from Carson to Colton to Corbin. (That last one means raven. Bird names are everywhere!)

Maybe Cobham feels a little awkward to say. It sounds more like “cob ’em” than Cobham. That might be a regional accent. Or maybe it’s the reason that Cobham has never caught on.

Of course, Cob or Cobb might make an interesting option, especially in the middle spot.

It could even be an unexpected Jacob nickname choice.

As in a young swan. It sounds like signet – a seal, or a type of ring that can make a wax seal. But it’s an animal-inspired name that might be surprising as a middle.

An Anglicized form of Fionnuala or Finnguala, Fenella comes straight out of Irish folklore.

Fenella’s wicked stepmother who turned her and her brothers into swans. Trapped in their cygnine form for 900 years, the children of Lir eventually broke the curse through the intervention of a monk.

Fenella isn’t common in the US, but it’s not unknown. Actress Finola Hughes wears yet another form of the name. Sir Walter Scott used the name for a minor character in his 1823 novel Peveril of the Peak.

Short form Nuala is now bestowed as a given name, too, but the -ella ending makes Fenella a compelling rarity.

Take swans, mix in some medieval Christianity, and you’ll arrive at three of the most wearable swan-inspired baby names.

The twelfth century Saint Hugh of Lincoln is the patron saint of swans, and is often depicted in the company of a white swan. It’s said that a swan was his loyal companion and even served as a sort of guard dog while the saint slept.

Lincoln is also a presidential surname, associated with copper pennies, stovepipe hats, and the Civil War. So swans might not be the first thing that come to mind when you hear Lincoln. But the tie is unmistakable.

Leda features in yet another story of the powerful god Zeus seducing a maiden, this time while in the guise of a swan.

In our Emma-Luna moment, Leda fits right in. It’s short and complete, wearable for a child, but without sacrificing any sophistication for an adult.

Leda also qualifies as an overlooked vintage gem. Back in the late nineteenth and early twentieth centuries, Leda regularly charted on the fringes of the US Top 1000.

Spellings Leta, Lita, and Lida all work, too, though they point to other possible meanings and origins.

One of Leda’s children by Zeus was Helen, she of the face-that-launched-a-thousand-ships. That might even put Helen on the list of swan-inspired baby names.

Swan Lake might be the best known ballet other than The Nutcracker, especially since Oscar-winning movie The Black Swan came out in 2010.

The basic premise of Tchaikovsky’s ballet is this: an evil sorcerer turns a beautiful princess into a swan. The cursed princess is named Odette.

Odette comes from Otto, a name that feels fresh, edgy, and unexpected, without actually being invented or new.

In the ballet’s third act, we meet another Otto-named girl: Odile, daughter of the evil sorcerer. She takes Odette’s place – the black swan. The tension between good-girl Odette and the darker Odile is at the center of The Black Swan.

One more possibility for our swan-inspired baby names list? Nina, the role for which Natalie Portman won an Oscar.

The female equivalent of cob is pen. With Penelope riding hide, Pen and Penn don’t seem so outlandish. And, as it happens, one of the possible meaning for Penelope is duck.

Love elaborate R names like Rhiannon and Rosalind? Here’s one with a botanical tie and a cygnine twist, too!

Rhodanthe fits with all of these Greek, ends-in-e names for girls. It’s pronounced like the “ro” in Rose, the “dan” in Daniel, and the “thee” – rhymes with bee – in “Theodore.”

Like Cobham, it’s not used as a given name, so it’s a truly bold choice.

The chief advantage of Svana? It sounds much more like swan than any of the other swan-inspired baby names so far! The chief disadvantage? While Svana is a real given name in Icelandic, it doesn’t sound much like a name in English.

And yet, it could work. The ‘sv’ sound occurs in other languages, like the Russian Svetlana. And Svana isn’t a million miles away from other ends-in-a names for girls.

It comes from the Old Norse word for swan – svanr. Swedish design firm Svan used the name for a highchair design, which increases the possibility that other parents will recognize the sound.

Swanhilde appears in the history books from the early Middle Ages forward, the name of several princesses and women religious.

There’s a Svanhild in Henrik Ibsen’s play, Love’s Comedy, another in the ballet Coppelia, and a third in the opera Hulda. None of them are household names. ANd Swanhilde? Not exactly the easiest name to wear to kindergarten, even in our anything-goes age.

But it comes from the elements “swan” and “battle,” making this Germanic name a logical fit for this list.

The goddess Saraswati rides the raja hansa – the royal swan, a symbol of viveka. Viveka is the ability to discern the difference between the good and bad, the enduring and the fleeting.

Vivek is the masculine form.

The name is surprisingly international. Beyond India, there’s also a connection to Sweden. Viveka is a Swedish feminine name related to the Germanic Wiebe. Actress Vivica Fox uses a different spelling; Viveca is seen, too.

In our age of Olivia and Victoria and Ava, V names are seen as vibrant and appealing. Viveka – choose your spelling – could be a rare name, rich with meaning and cygnine appeal.

Would you ever consider any of these swan-inspired baby names? 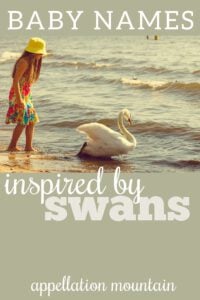