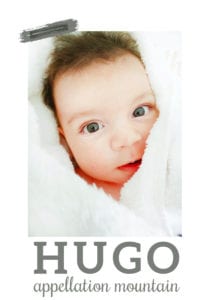 The baby name Hugo could follow other o-ending boy names into greater use.

At the end of the 900s, Hugh Capet ruled the Franks. It remained popular in the region, and the Normans brought it to England with them a century later.

It became very English, indeed, thanks to Saint Hugh, the Bishop of Lincoln.

The baby name Hugo is simply the Latinized version of Hugh.

Though Hugh also steps in for several Irish names, including fiery Aodh – the root of mega-popular Aidan.

They’re both used steadily in the US. Hugh fared well in the early twentieth century, but neither name has been used in big numbers recently.

It’s different on the other side of the Atlantic.

Hugo appears in the Top 100 or better in countries from Spain to Scandinavia. In the English-speaking world, it’s more popular in England and Australia than it is in the US.

Famous Hugos pop up all over the globe.

And then there’s my personal favorite: the Hugo Award, given annually for achievement in science fiction writing. The awards are named in honor of early scifi author Hugo Gernsback. The association lends the name a certain creative, quirky edge.

Speaking of fiction, if you know how the Harry Potter series ends (spoiler alert), Ron and Hermione have a son named Hugo.

Nineteenth century French author Victor Hugo is known for his poetry, as well as novels novels Les Misérables and The Hunchback of Notre-Dame.

Famous figures appear from South America to Scandinavia and almost everywhere in between.

The baby name Hugo fits in nicely with current trends, especially our love of boy names ending with o. Leo ranks in the current Top 100. Names like Milo and Arlo continue to gain in use. And traditional Theodore might be the hottest of the classic boy names at the moment, fueled by vibrant nickname Theo.

That could make this a great opportunity. It’s a familiar name that remains relatively underused. Even if it doubled in terms of birth numbers, it would still fall somewhere in the mid-200s.

If you’re after a nicely on-trend name that feels traditional, too, the baby name Hugo could fit your requirements. Add in a great meaning, and there’s lots to love about this one.

Would you consider the baby name Hugo for a son? 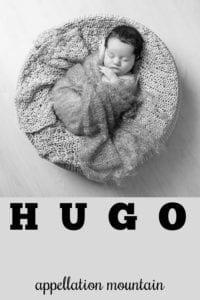