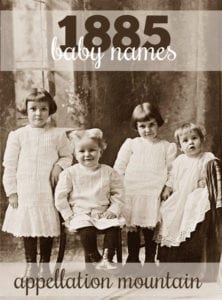 Rare 1885 baby names mix place names, surnames, and what exactly explains this? names. It makes for a quirky list.

They’re the flipside of the Neglected Gems from the 1880s and 1890s. While the chart toppers of generations past may feel antique today, we remember and acknowledge them as given names. We all imagine that someone will bring back Ralph and Sallie – it’s just a question of when.

If you’re wondering what counted as a chart-topper in 1885? Scroll to the bottom of the post for the Top 20 for boys and girls from the year. A surprise or two mixes in with names we consider rock solid classics.

But how about the names that never caught on? Will they fade from our collective memory?

And is that a problem?

Maybe Capitola and Lugenia are best left to the past.

But other names could be exactly what twenty-first century parents are after – familiar, but seldom heard. Or just a little bit different than the names that everyone else is choosing today.

The names listed here all ranked #500 or higher as of 1885. Some climbed in use, but none of these ever cracked the US Top 100. And while we’ve forgotten them, they could feel fresh and new.

Read on for my favorite 1885 baby names.

We hear Madeline and Genevieve everywhere. Is Albertine so different? Rarer than Albert, it comes with great nickname potential and a sort of vintage-cool vibe.

Also spelled Clothilde, this Germanic name has been out of favor for years. But it’s a saint name, and a former Queen of the Franks. File it somewhere between Chloe and Matilda, and this name has potential.

It sounds like Philadelphia, hold the Phil. But it refers to the city of Delphi, where Apollo’s oracle once stood. If we’re wild for Sophia, why not Delphia?

This name means sweet, from the Latin dulcis. It could be short for the equally rare Dulcinea, a literary invention from Cervantes. But I think Dulcie stands on its own, an alternative to Sadie or Maisie.

We love the letter X, and names like Ellie, too. Exie sounds a little bit like a modern invention, but it’s waiting on this list of 1885 baby names for rediscovery.

With Atlas, Orion, and Penelope so popular, you’d expect Leda to succeed. Not only does it come from Greek myth, but it shares sounds with Layla, Luna, and so many other popular L names for girls.

Equally vintage Mabel is catching on. Is Maebelle an elaborate spelling of the same? Or a Mae-Belle smoosh? Either way, it has potential.

It sounds like a modern word name, a literally literary pick like Story or Fable. But it was probably borrowed from the Latin nova – new, possibly referring to spring.

The original sits in the Ukraine; a Texas city also bears the name. But both refer to that ancient wanderer Odysseus. If you love Tessa, but want something much less common, Odessa fits.

Sophia tops the charts, but Sophronia is nearly forgotten. The name means sensible; the seventh century Saint Sophronius is remembered for his wisdom. It’s elaborate and wearable.

A modern Cornish girls’ name meaning third, Tressa could also be a spin on Theresa. Or maybe it’s just another -ess name from the late nineteenth century. We were wild for Bessie and Jessie, with names like Odessa on the fringes, too.

There’s regal Victoria and word name Victory, but ‘how bout Victorine? A rare feminine form of Victor, it’s a tailored, elaborate choice for a daughter with a vintage vibe.

Ben names are enjoying the spotlight recently, from Top Ten Benjamin to Hollywood-boosted Benedict. Benton peaked in the nineteenth century, but has recently returned to the US Top 1000, though it feels modern, rather than vintage, today.

A swaggering name, Dempsey means proud. Years after he left the ring, heavyweight champ Jack Dempsey leaves his mark on the name, too.

The Broadway blockbuster might inspire a few parents. And while Ham is a non-starter of a nickname, Milo might work.

It refers to a grove of holly trees, and feels appropriate for a Christmas baby. It also fits right in with so many stylish boy names ending with s, from Miles to Brooks.

Named for its founder, Sam Houston, the Texas city fits right in with so many place names we’ve used for children’s name in recent years. In fact, at #734 as of 2020, Houston might be on the verge of a comeback.

A phonetic spelling of Scandi name Leif, Lafe rhymes with Rafe – though neither is particularly common in the US these days.

If Leo names rule, why not Leopold? It sounds like the name of a minor German prince, or, of course, one of The Producers. It’s unexpected and fun.

More subtle than Fox or Bear, Orson is borrowed from the Latin ursus – bear. Orson Welles  makes it familiar, but it’s quite rare for a child.

It rhymes with handsome, and it shares a deep, spiritual meaning. (Christ died as a ransom for the sins of the world.) If you love two-syllable, ends-with-n boy names, this is among the rarest.

The eternal city is as good a place name candidate as Camden or Boston, and far less expected. As brief as Kai and Jude, Rome remains much rarer than Roman – but it could work. And, like fellow place name Houston, Rome ranks in the US Top 1000, at #970 as of 2020.

Yes, it would almost certainly be mistaken for Summer. Maybe constantly. But that’s a plus, too, a summery surname name that feels familiar, but is quite rare.

Would you consider any of these 1885 baby names for a child today? 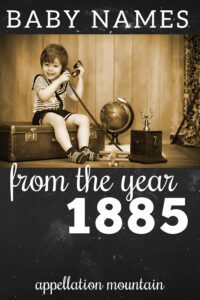 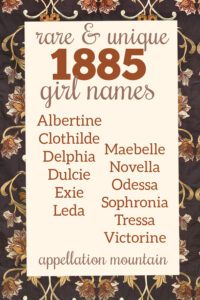 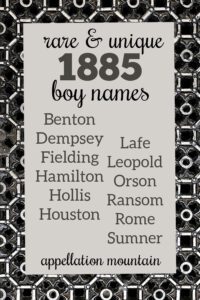 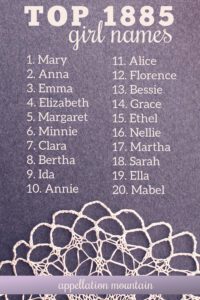 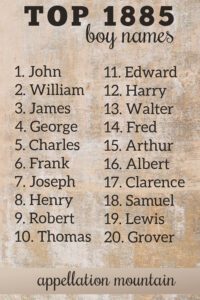