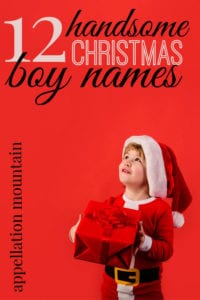 Feeling festive? These dozen Christmas boy names bring the holiday spirit. And best of all? None of them rank in the current US Top 500.

I’ve skipped Nicholas and even Claus in favor of Christmas boy names that celebrate the season more quietly. Of course, you might have to explain why these choices are perfect for the winter holiday season – but once you know, well you know that these dozen names are rich with Christmas cheer.

Not sure if you’re expecting a son or a daughter? The girls’ list can be found here.

Whether you’re after a surprising first name or a spirited, seasonal middle to celebrate the Christmas season, these twelve names deliver.

Bing Crosby first crooned “White Christmas” way back in 1942, making his name a musical reminder of the season. It’s the most recorded Christmas song of all time, even winning an Oscar, since it was originally recorded for the Irving Berlin movie Holiday Inn. Bing was born Harry, and while stories about how he got his nickname vary, it appears to be short for Bingo, inspired by a comic strip character when he was young. Kate Hudson has a Bingham called Bing, which might make it feel more accessible for boys born today.

Clement C. Moore penned his way into literary – and Christmas – history with “A Visit from St. Nicholas,” his famous 1832 poem that begins ’twas the night before Christmas. Then come the not-stirring mice, the visions of sugar plums, and eight tiny reindeer. The author does, indeed, meet Santa Claus. Moore’s depiction of the character helped define Santa as we know him today, and helped shape the way Americans celebrate the holiday. The name’s meaning – gentle – seems like a good fit for the season, too.

First written in 1941, “Carol of the Drum” imagines a poor boy summoned to the birth of Jesus. Because he has no gift to offer, the little drummer boy plays music instead. The song caught on in the 1950s. (In fact, Bing Crosby and David Bowie covered it in a famous duet in 1977.) It’s a seasonal staple these days, and makes rock ‘n’ roll Drummer feel like a sweet Christmas choice, too. Design blogger Katy of No Big Dill named her only son Drummer. It’s among the rarest possibilities on this list, but I think it works nicely.

What could be more Christmas-y than an evergreen? They’ve been part of winter celebrations since medieval Germany. The custom slowly spread throughout Europe and North America. The Fraser fir is among the most popular varieties of tree for the Christmas season; it’s named for Scottish botanist John Fraser. The surname’s meaning is lost to time, though alternate spellings Frazier, Frazer, and Frasier are all seen. That last one brings to mind long-running television character, Frasier Crane – not especially wintry, but familiar.

Jack Frost is an impish take on Old Man Winter, said to nip at your nose and paint intricate, icy swirling patterns on windows. He’s not exactly a Christmas character, though he’s mentioned in “The Christmas Song” and often appears in seasonal specials. Of course, he’s sometimes the villain, like in the Santa Clause sequel. Jack is far too familiar to feel like a Christmas name. But Frost – hold the character – makes for a wintry choice that belongs with Christmas boy names, too. It’s a nature name, but one with a little extra sparkle for the season.

The surname Hollis means holly trees; just like Hill or Brooks, it was once bestowed on those who lived nearby such a feature. Since Holly is associated with girls born during the Christmas season. It only makes sense that Hollis appears on the Christmas boy names list. Another fun twist: hip hop innovators Run-DMC recorded “Christmas in Hollis” for a Special Olympics benefit album in 1987. The trio hails from Hollis, Queens – a happy coincidence. As for the name, it fits right in with other preppy picks like Brooks and Wells.

In Greek legend, Linus is the son of Apollo, as golden as his dad. It’s the name of an early pope, too. So what puts it on the Christmas boy names list? That’s down to Charles Schultz, creator of The Peanuts comic strip. “A Charlie Brown Christmas Special” debuted in 1965. Among the many highlights is Linus explaining the true meaning of the season to Charlie Brown. In a story that’s all about holiday overwhelm, Linus provides the heart of the tale. He’s a little younger than Charlie and friends, but he’s wise beyond his years. That puts Linus with the Christmas boy names.

Yes, Kim and Kanye used it for their daughter. But North feels like it belongs with Christmas boy names. It’s as rugged as Ridge or Crew, and North takes it in a wintry direction. Santa, of course, makes his home at the North Pole. And, for much of the world, Christmas and winter feel like one in the same. Expressions like “true north” and associations with the compass make cardinal direction North feel almost like a virtue name, or at least a daring, adventurous one with ties to the winter season.

Strictly speaking, Pax is borrowed from the girls. In Roman mythology, Pax was the goddess of peace. But it rhymes with Max and Jax, plus there’s a Jolie-Pitt son with the name, so it feels masculine. As for why it makes the Christmas boy names list? Pax translates to peace, and it’s one of those Latin words broadly recognized today. Peace isn’t just for the winter holidays, of course, but “peace on earth, good will towards men” feels especially at home at this time of year. It comes up in carols from the most traditional to Snoopy versus the Red Baron.

Rudolph may have saved Christmas with his nose so bright, but it feels like a non-starter of a name. (Or could it be considered a darling, daring grandpa name? Maybe.) But Rudy splits the difference between the old and the new. It still feels vintage – in fact, Rudy peaked back in the 1930s. But it shares the spirit of many modern favorites, fitting in with Luca + Theo, Eli + Ryder. Notre Dame fans will think of Daniel “Rudy” Ruettiger, which lends the name an inspirational, feel good vibe. But does the controversy surrounding Rudy Giuliani could rob this name of its retro, festive vibe?

Like Fraser, this name is all tree. Also like Fraser, it feels like an on-trend, surname-inspired name, the kind of choice that fits right in with Logan and Tanner and Chase. It means pine – another popular pick for Christmas trees, and it’s German. If that seems obscure, think of “O Tannenbaum,” often translated into English as “O Christmas Tree.” Fun fact: the song was never intended as seasonal. It simply praised the evergreen, steadfast nature of pine trees. And, of course, that’s part of the appeal of tree names. They convey all the ideals that we associate with the natural world. Plus, Tannen also connects us to the Christmas season.

Yul – as in Brenner – is cousin to the names Julius and Julian. But add an ‘e’ and Yule is an Old English and Norse word to refer to a winter feast that predates Christianity. Over time, it became associated with Christmas. Now we burn yule logs in our fireplaces, said to bring prosperity and good fortune in the coming year. We also bake special desserts that look like yule logs for our holiday dinner tables. The word filters into the season in lots of subtle ways, too. On some level, I’m not sure Yule makes a very good given name for a child … but then again, Yul is the real deal. So why not this seasonal, spirited choice?

Those are my picks for a dozen daring Christmas boy names. Are there any that you would consider? 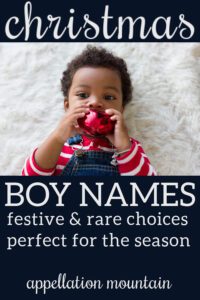 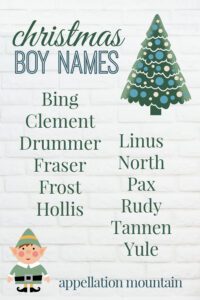