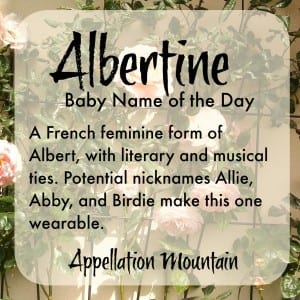 Clementine, Evangeline … elaborate, vintage girls’ names ending in -ine are having a moment.

Thanks to Charlotte for suggesting one that just might fit.  Our Baby Name of the Day is Albertine.

We tend to settle on one or two favorites to feminize masculine names, but there’s no reason other forms can’t be used.

Josephine is Joseph, but Albert is Alberta.  Charles is Charlotte and Caroline, and maybe just Charlie. And John is … Joanna, Jane, Jean, and so on.

German Albert comes to us from Adalbert – noble and bright, an auspicious meaning.  From Queen Victoria’s husband to Einstein, there’s been no shortage of notable men by the name.

Albertine is French, but was not unknown in the US. Back in the late nineteenth and early twentieth centuries, the name regularly hugged the edges of the US Top 1000.  In France, Albertine fell out of favor by the 1940s, but Meilleurs Prenoms pegs this name as one that could soon sound fresh again.

If you’re familiar with the name, there’s a good chance you’ve heard Brooke Fraser’s haunting promise of a song, “Albertine.”

The New Zealand singer-songwriter traveled to Rwanda in 2005, and met a young girl orphaned by genocide.  The girl’s name inspired the song.

Now that I have seen, I am responsible.  Faith without deeds is dead.

The single was big in her native country, and thanks to iTunes editors’ picks, it was heard in the US, too. Albertine is rich with history:

Despite the compelling song and the French connection, Albertine has faded from use in the US.  1981 was the last year this name was given to more than five girls in a single year.  This mirrors the fall of Albert and Alberta.

And yet, there are reasons to think this name could wear well today.  Albert is back in the UK.  And nicknames like Allie and Abby would make Albertine very wearble for a modern child.  For the more daring, there’s Bertie – or my favorite, Birdie.

What do you think of Albertine? Is this name so clunky it’s cool? Or is it best left to the history books?